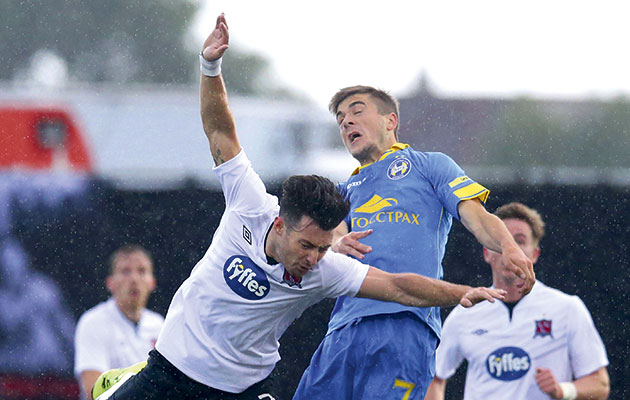 While the Republic of Ireland’s national team is well supported, there remains only limited interest in a domestic league that has provided several players for the international side over the years, with 10 of the 25 players used by Martin O’Neill in the Euro qualifying campaign starting their careers with League of Ireland clubs.

The latest to try his luck over the water is last year’s domestic player of the year, Richie Towell, with the former Celtic and Hibernian striker joining Brighton & Hove Albion after scoring 25 goals in 32 league games for champions Dundalk.

And Dundalk boss Stephen Kenny will miss Towell’s goalscoring touch as he bids to lead the club to a hat-trick of titles for the first time in their history.

“It’s going to be a difficult task to win three in-a-row; it’s now 30 years since Jim McLaughlin did it with Shamrock Rovers [who won four consecutive crowns],” says Kenny. “Naturally we are going to miss Richie Towell, but I’m confident that my two new signings, Patrick McEleney from Derry City and Robbie Benson from UCD, will blend into the team.

“The previous season we lost centre-forward Patrick Hoban to Oxford and pushed David McMillan up front last season and he did very well for us.”

Kenny expects the biggest threat to his title aspirations to come from Cork City, who finished second in 2014 and 2015, and lost the FAI Cup Final to Dundalk last term.

“Cork manager John Caulfield has signed six new players, and apart from Cork I expect Shamrock Rovers, St Patrick’s Athletic and Bohemians will also be hoping to deny us the hat-trick,” adds Kenny.

Shamrock will be without Damien Duff, who has been forced to retire after a brief spell at Rovers last term, with the 37-year-old confessing: “My heart wanted me to continue playing, but my body won the battle and told me to stop.”

Another former Irish international, Liam Miller, who like Duff returned home after a spell in Australia, also looks to have played in the competition for the last time, having been released by Cork after just one season at Turner’s Cross.

There were two managerial changes in pre-season, with Kenny Shiels joining Derry City and Sligo Rovers taking on ex-Peterborough manager Dave Robertson, whose last job was with Southend United under-21s.

Only formed in 2007, Wexford Youths will play in the top flight for the first time after winning the First Division and they are joined by Finn Harps.