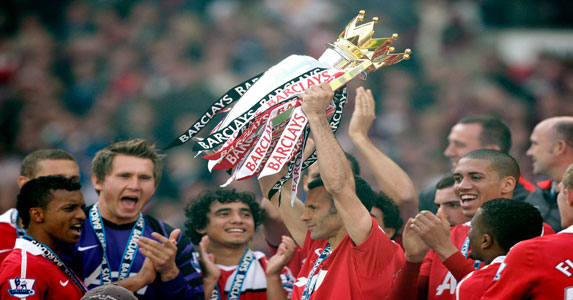 Alex Ferguson believes the rise of Manchester City and the revival of Liverpool under Kenny Dalglish means that the top six teams will be competing for the title this season.

“We used to talk about a top four, with ourselves, Arsenal, Chelsea and Liverpool,” says Ferguson. “You can’t say that any more. Manchester City have definitely come into the frame. They have a buying power better than the rest of us.

“Maybe having the run in the European Cup stretched Tottenham too much last season and they ended up being out of the top four. But you look at those teams and say any one of them could win the league.”

Although Manchester United won the title at a canter last time out, Ferguson has deemed a comprehensive rebuilding process necessary this summer. While still seeking to add a creative midfielder, with Internazionale’s Dutch playmaker Wesley Sneijder the prime target, they had already spent in excess of £50million on new players.

Chelsea will again be expected to be strong challengers, but new manager Andre Villas-Boas has yet to make his mark in the transfer market.

Manchester City, as Ferguson suggested, will be serious contenders, especially with Sergio Aguero added to their squad.

Liverpool may have paid over the odds for Jordan Henderson and Stewart Downing – £20m each, from Sunderland and Aston Villa respectively – but both players fit director of football Damien Comolli’s criteria of being young and English.

Liverpool also signed Scottish midfielder Charlie Adam from relegated Blackpool and Brazilian goalkeeper Doni from Roma, although their best business was conducted in January, with the sale of out-of-sorts Fernando Torres paying for Luis Suarez and Andy Carroll.

If Liverpool carry their form over from the second half of last season they will be serious contenders to break back into the top four.

If they are to do that, it will most likely be at the expense of Arsenal, whose pre-season preparations were again dominated by the future of unsettled captain Cesc Fabregas.

Across north London, Tottenham Hotspur’s summer was dominated by the will he/won’t he saga of Luka Modric, which did nothing to calm nerves following the disappointment of missing out on the Champions League. On the plus side, Brad Friedel will be a more solid presence in goal than Heurelho Gomes and more deals will be expected before the August 31 transfer deadline.

Former Spurs manager Martin Jol is back in England at Fulham, where Mark Hughes quit in the summer.  The Dutchman will be a good fit at Fulham, where former Liverpool defender John Arne Riise was the main summer signing, from Roma, and much will depend on the form and fitness of another Norwegian defender, Brede Hangeland, and American forward Clint Dempsey.

Hughes had been strongly tipped to move to Aston Villa after quitting Fulham, but after a protracted recruitment process – during which Villa had been close to hiring former England manager Steve McClaren – former Birmingham City boss Alex McLeish was controversially hired.

McLeish has divided opinion, especially as he oversaw two relegations with Villa’s city rivals. Darren Bent has been a regular goalscorer since his January arrival from Sunderland but he may lack for service following the departures of Ashley Young and Downing. Shay Given from Manchester City is a solid signing, though.

Last season Stoke City enjoyed their best campaign for decades, with an FA Cup Final appearance taking them into the Europa League. Their direct approach will continue to annoy many, but Jonathan Woodgate, signed on a pay-as-you-play basis from Spurs, could add some sophistication at the back, assuming he stays fit.

Everton owner Bill Kenwright has been seeking a major investor but to no avail. So far they have kept hold
of key players but, with no arrivals on the horizon, a repeat of last season’s seventh place looks out of reach for manager David Moyes.

In contrast, Sunderland manager Steve Bruce was the busiest Premier League manager this summer. With cash from the sales of Henderson and Bent, he has plenty of new faces, including defenders John O’Shea and Wes Brown from Manchester United, teenage striker Connor Wickham from Ipswich for £8m, midfielders Craig Gardner and Sebastian Larsson (both from Birmingham), and South Korea forward Ji Dong-won from Chunnam Dragons. Whether the signings can arrest the decline that hit Sunderland over the second half of last season remains to be seen.

Newcastle suffered a blow with the loss of captain Kevin Nolan to West Ham, but will hope that the arrival of French midfielders Sylvain Marveaux (free from Rennes) and Yohan Cabaye (Lille, £4.5m) will compensate. Senegalese forward Demba Ba, signed on a free transfer from West Ham, should add firepower but it could be a long and difficult season on Tyneside.

Bolton are always a difficult side to judge. Under Owen Coyle, they reached the FA Cup semi-final last season only to capitulate to Stoke. Their style of play has entertained but they also got sucked into a relegation fight. Their only signing so far, midfielder Darren Pratley on a free from Swansea, suggests they could get dragged in again.

West Brom are confident that in Roy Hodgson they have found the right manager to take them to the next level after surviving their first season back in the top flight. Hodgson’s achievements with Fulham are a realistic aspiration.

Blackburn may struggle with few new signings and Phil Jones’ departure to Manchester United.
New owners Venky’s did not inspire confidence with their dalliance with Ronaldinho, but will hopefully give Steve Kean space to manage.

The permanent signing of Jamie O’Hara and the £8m capture of Roger Johnson from Birmingham should give Wolves the boost they need to keep battling against the drop, but it may not be pretty.

Wigan survived against the odds last season and may struggle again, with owner Dave Whelan keen to sell up ahead of retirement.

Of the promoted clubs, Norwich City have a bright young manager in Paul Lambert, the former Borussia Dortmund and Celtic midfielder, who has overseen successive automatic promotions. A well-run club, they did most of their pre-season shopping in the lower divisions, with the exception of James Vaughan from Everton and Belgian defender Ritchie De Laet on loan from Manchester United.

QPR, the Championship winners last season, are in a state of flux, with fans angry at ticket price rises and friction between the owners, Bernie Ecclestone, Flavio Briatore and the Mittal family. Manager Neil Warnock, assuming he is still there at the start of the season, is adept at building battling teams on small budgets. Jay Bothroyd, a free signing from Cardiff, looks a good piece of business but the jury is out on another fee-free deal, midfielder Kieron Dyer.

Swansea City – the first Welsh club in the English top flight since they were relegated in 1983 – also have a bright young manager in Brendan Rodgers. However, like most previous play-off winners, will struggle without major investment.

So far their only signings have been Portuguese goalkeeper Jose Moreira from Benfica, forward Danny Graham from Watford and highly rated defender Steven Caulker on loan from Tottenham.