Overview
The green-and-whites qualified for their first Euro finals, and their first tournament since the 1986 World Cup, with a squad drawn from a limited pool of players but galvanised by manager Michael O’Neill.

Northern Ireland’s campaign got off to a flying start with a win in Hungary, thanks to a goal from Kyle Lafferty. Another Lafferty goal secured victory over Greece in Athens in their next trip. A 3-0 win over Greece, at a rebuilt Windsor Park in Belfast, secured qualification.

O’Neill deserves huge credit for making the most of limited resources – made worse by the change in regulations which has allowed players such as James McClean and Darron Gibson, both born
in the North, to represent the Republic.

Only a handful play in the Premier League – Lafferty at Norwich City and Steven Davis at Southampton, plus Jonny Evans, Chris Brunt and Gareth McAulay at West Bromwich Albion. The rest are scattered around England’s lower divisions and Scotland, including Kilmarnock striker Josh Magennis, a former goalkeeper, who scored a crucial goal against Greece.

Tactics
Lafferty plays in front of a solid midfield policed by the likes of Chris Baird, Davis and Oliver Norwood, while the more attack-minded players like Jamie Ward attempt to support him.

One to watch: Kyle Lafferty 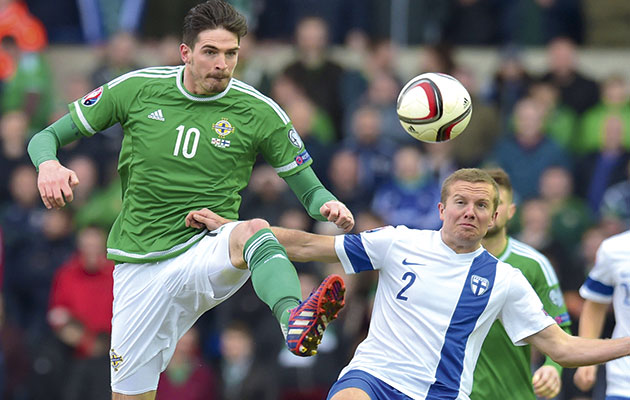 From doghouse to penthouse. Kyle Lafferty was Northern Ireland’s top scorer in qualifying with seven goals and is now reaping a rich reward for finally cleaning up his act.

On the receiving end of virulent criticism after seeing red for a reckless, late challenge on Joao Pereira in a World Cup 2014 qualifying loss to Portugal, the Norwich City striker seemed, at the time, to have burned his bridges with the IFA.

However, following a home-truths session with manager Michael O’Neill, he has worked to change his wild ways and has been on an irresistible roll since netting the winner in the opening qualifier in Hungary. He is more professional in his attitude, revelling in his new main-man responsibilities and providing much of the impetus for the side’s qualifying triumph.

“Michael made me wake up,” says the ex-Burnley, Rangers and Palermo striker. “He sat me down and talked to me like an adult. The things he said hurt but, when

I went away and thought about it, I knew he was right.”

There are still problems at club level. He has barely featured in the Premier League this term and may have to move on if he is not to be rusty for his date with destiny in France. His country needs him.