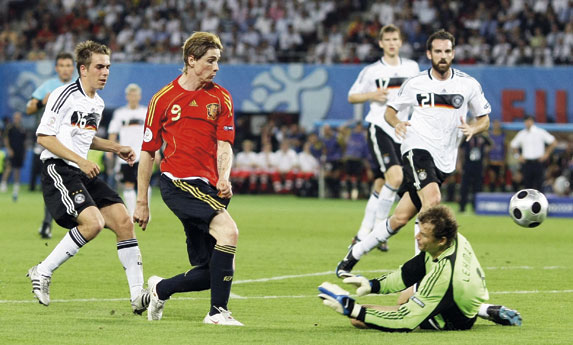 Spain, the perennial bridesmaids of the international game, finally claimed a title that their intelligent style of football deserved as they beat Germany in the Final of Euro 2008 in Vienna. Forty-four years on from their victory on home soil in 1964, they were champions of Europe once again.

England were the major absentees from the finals after they finished behind Russia and Croatia in their group, a disappointing outcome that prompted the dismissal of manager Steve McClaren.

At the finals, Portugal cruised through Group A, beating Turkey and the Czech Republic, and could even afford to play a reserve side in their final group game, which they lost to Switzerland. With the Swiss already heading out of the tournament after losing their first two matches, it was Turkey who took a surprise second place. At 2-0 down to the Czechs in their final group game, Fatih Terim’s side looked to be out, but they staged an amazing recovery to win 3-2.

In Group B, Croatia won all three games, even beating favourites Germany, for whom Poland-born Lukas Podolski scored twice against the country of his birth.

Co-hosts Austria picked up a single point, in a 1-1 draw with Poland, thanks to referee Howard Webb’s award of a controversial penalty in injury time. Going into their final group game, the Austrians had slim hopes of reaching the quarter-finals, but neighbours Germany put an end to their dreams.

The well-organised Romanians held out for draws with Italy and France, but Italy squeezed through to the quarter-finals with a victory over a poor French side, who had Eric Abidal sent off midway through the first half.

Spain began Group D with a storming 4-1 victory over Russia, followed by comfortable wins over Sweden and Greece. Russia recovered from their opening loss to beat defending champions Greece and Sweden to claim second spot.

While the Germans had been lacklustre in the group stage, they got their act together in convincing fashion for the knockout stages, starting with a 3-2 victory over Portugal in the quarter-finals.

The meeting between Croatia and Turkey was heading for penalties but burst into life in the final minutes of extra time. Ivan Klasnic looked to have sealed Croatia’s passage to the semi-finals with a header in the 119th minute but, in an astonishing recovery, Semih Senturk grabbed an equaliser for Turkey with the last kick of the game. Perhaps understandably, Turkey had the upper hand in the penalty shoot-out. Luka Modric and Ivan Rakitic shot wide and Mladen Petric saw his shot saved by Rustu Recber as Turkey went through.

Marco Van Basten’s Holland team were favourites to beat Russia, who were coached by Dutchman Guus Hiddink, but a glittering performance from Andrei Arshavin put Holland in the shade.

Russia forced the Dutch onto the back foot, forcing them to chase the game for the first time in the tournament. Ruud Van Nistelrooy’s goal took the game into extra time but Russia’s physical reserves were deeper and Arshavin set up Dmitri Torbinski before scoring a brilliant individual goal himself

In the other quarter-final, Italy were able to contain Spain but offered precious little in attack themselves and after 120 minutes the goalless game went to penalties.

Spain captain Iker Casillas was the hero in the shoot-out, saving from Daniele De Rossi and Antonio Di Natale before Cesc Fabregas despatched the winning kick.

Turkey, after their series of comebacks, were hoping to emulate 2004 champions Greece in reaching the Final. A late Semih goal, which levelled the scores at 2-2 against Germany in the semi-final, looked like making that a strong possibility, but left-back Philipp Lahm popped up in the last minute with the goal that sent Germany into the Final.

Against Spain in the other semi, Russia were a shadow of the team that had outplayed Holland and Arshavin was anonymous.

Against Germany in the Final, Spain’s superior passing style prevailed, with Fernando Torres scoring the only goal of the game after 33 minutes of the first half.

Prior to beating Italy in the quarter-finals, Spain had lost penalty shoot-outs on three previous occasions – all of them occurring on June 22.

At 38 years and 257 days, Ivica Vastic became the oldest scorer at any European Championship finals when he converted a late penalty for Austria against Poland.

Spain were the first team since Germany in 1996 to win the tournament undefeated.