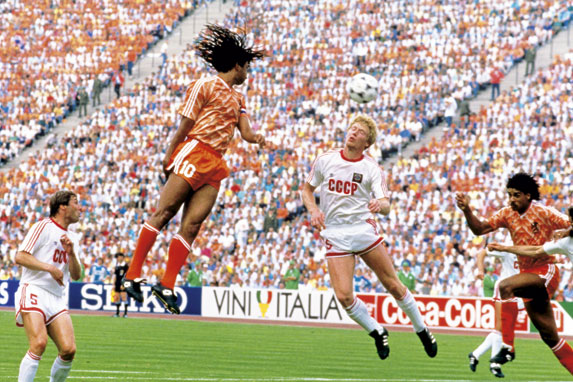 Success at international level eluded Holland until the World Cup runners-up of 1974 and 1978 finally landed a major prize across the border in West Germany.

Holland were coached by Rinus Michels, who had been in charge when they lost the 1974 World Cup Final to the Germans, and their triumph 14 years later was a testament to the Dutch approach to youth coaching and football intelligence.

For the third tournament running, the format was a qualifying section of mini-leagues, followed by an eight-team finals, with the group winners progressing to knockout semi-finals.

In the qualifying round, Italy, the USSR, England and Holland swept all before them in their respective groups. Spain, Denmark and the Republic of Ireland all went through after a tight scrap, while West Germany qualified automatically as hosts.

The only hitch in the qualifying process was in Holland’s home match against Cyprus in October 1987. The Dutch won 8-0 but the result was annulled by UEFA due to a firework being thrown at Cyprus goalkeeper Andreas Charitou. Holland won the re-arranged game 4-0 but arguments still raged years later as to whether details from the first match should be credited to players’ international records. Striker John Bosman scored five of Holland’s eight goals in the first match but only three in the replay.

England arrived in West Germany for the finals with the best record of any of the qualifiers, scoring 19 goals and conceding just one. But it appeared they had peaked too early and they lost all three of their group games. It started with a 1-0 setback against Jack Charlton’s Republic of Ireland and continued with a devastating defeat by Holland, for whom Marco Van Basten scored a hat-trick, and a 3-1 reverse against the USSR.

Milan striker Van Basten had been troubled by an ankle injury all season and it took the words of friend and mentor Johan Cruyff to persuade him to join up with the squad. When Van Basten was substituted towards the end of the England game, he shook hands with coach Michels and that handshake came to symbolise the new-found unity of spirit which ultimately carried the Dutch to victory. However, defeat by the Soviets in their opening game meant Holland finished second in their group

West Germany topped the other group without appearing convincing – Italy were runners-up – and led Holland in their semi-final in Hamburg thanks to a Lothar Matthaus penalty after a foul on Jurgen Klinsmann. Holland hit back immediately, with Ronald Koeman thumping home a penalty of their own before Van Basten snatched a late winner.

The USSR continued their fine record in the championships with a 2-0 victory over Italy in the other semi-final. 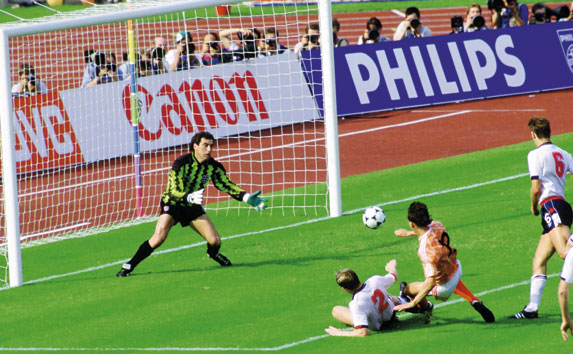 In the Final, played in Munich’s Olympiastadion, Holland met a Soviet side missing the significant defensive presence of Oleg Kuznetsov through suspension. But even Kuznetsov would not have been able to control the panache and flair of Van Basten and skipper Ruud Gullit in the Dutch attack when they were in this mood.

Gullit scored the first goal, a powerful header from Van Basten’s headed lay-off, and Van Basten added the second, volleying home from Arnold Muhren’s cross to claim one of the greatest goals ever seen in any major international event.

The Soviets had a great chance to get themselves back in the match when Holland’s goalkeeper Hans Van Breukelen carelessly conceded a penalty midway through the second half. However, the stopper redeemed himself by saving Igor Belanov’s spot-kick and Holland were rarely troubled thereafter.

France could only finish in third place, behind the USSR and East Germany, in their qualifying group – the only time since the tournament’s 1980 revamp that the holders have not qualified for the finals.

This was the only year in which the UEFA European Championship and European Cup winners came from the same country.

A month after helping PSV Eindhoven to European glory – by beating Benfica 6-5 on penalties after a goalless draw in Stuttgart – Hans van Breukelen, Ronald Koeman, Berry Van Aerle and Gerald Vanenburg all started in the Euro Final for Holland.