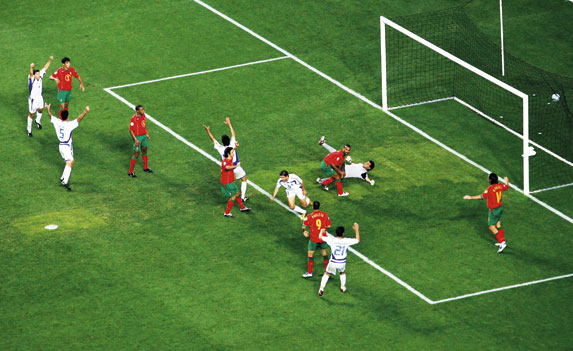 Charisteas scores the winner in the final against Portugal

A record 50 teams took part in the qualifying tournament, with the 10 group winners joined in the finals by hosts Portugal and the winners of the five play-offs.

Spain and Holland surprisingly finished only second in their respective groups, but they came through the play-offs, beating Norway and Scotland respectively. Latvia beat Turkey to reach the finals for the first time, while Russia edged past Wales and Croatia saw off Slovenia.

Portugal had won the hosting rights ahead of bids from Spain and Austria-Hungary, but they opened the finals with a nervous defeat
at the hands of Greece in Porto.

Nobody in their right mind could have predicted that the same two teams would be playing in the Final 22 days later.

Portugal got their campaign back on track by beating Russia 2-0 in Lisbon, with Deco, one of a number of changes, playing a crucial role.

Spain, meanwhile, were also struggling. Despite a confident start, beating Russia 1-0, they were held 1-1 by Greece in their second game after Raul missed an open goal late on. They needed a point from their final game against Portugal to reach the quarter-finals but substitute Nuno Gomes scored the only goal of the game for the hosts and Spain slunk home as yet another tournament ended in disappointment.

Instead, it was Greece, well marshalled by German coach Otto Rehhagel, who went through, despite losing their final game to Russia.

In Group B, England and France progressed as expected but exposed their weaknesses in the process. The English slipped up in their opening game, taking the lead against the French in Lisbon but then conceding an injury-time free-kick, from which Zinedine Zidane equalised, and then a penalty, which Zidane converted.

France, meanwhile, were very lucky to take a point from their meeting with Croatia and needed a late return to form by Thierry Henry to overcome Switzerland.

In Group C, Italy exited the tournament amid claims that Denmark and Sweden had contrived to draw their final game, ensuring
the passage of both teams to the quarter-finals.

But the Azzurri only had themselves to blame. Francesco Totti was sent off for spitting at Christian Poulsen in the 0-0 draw with Denmark, while Zlatan Ibrahimovic’s improvised backheeled equaliser for Sweden punished Italy for sitting back and defending a 1-0 lead.

They duly beat the Bulgarians, but only after Antonio Cassano’s injury-time winner in Guimaraes, and it was not enough as the other game finished 2-2 in Porto, with Sweden twice coming from behind to level the scores.

The Swedes, courtesy of their 5-0 thrashing of Bulgaria in their opening game, finished top of the group on goal difference.

Czech Republic, winners of Group D, were the only team to win three matches in the group stage, despite going behind in all three of their games. The Czechs continued their unbeaten form from the qualifiers and were involved in the game of the tournament, when they recovered from 2-0 down to Holland in Aveiro to triumph 3-2. Holland coach Dick Advocaat was criticised for his substitution of winger Arjen Robben – not least by the player himself – with the scores at 2-1, and when Dutch defender Johnny Heitinga was sent off, the Czechs pressed home their advantage.

Germany were a disappointment, lacking firepower and even failing to beat debutants Latvia, who picked up their only point of the tournament in a 0-0 draw with the Germans in Porto.

Portugal gained momentum as the tournament continued. In their quarter-final game against England, a thrilling match was decided by penalties. David Beckham skied the opening kick for England and goalkeeper Ricardo became the night’s hero, saving from Darius Vassell, who had been an early substitute for the injured Rooney, and then converting the winning penalty himself.

France’s ageing team finally reached the end of the road when they were beaten by Greece – a side whose hard-running, tight-pressing game proved highly effective, and whose single goal from Angelos Charisteas was enough to take them into the semi-finals.

Holland, after defeats on penalties in three European Championships and a World Cup, finally ended their spot-kick jinx with victory over Sweden in Faro.

Czech Republic put Denmark to the sword with a 3-0 victory in Porto. Striker Milan Baros scored twice to continue a fine run of form.

Portugal finally realised the promise shown in their 1991 World Youth Cup triumph with a 2-1 victory over Holland in the semi-final. Captain Luis Figo was the outstanding performer on a night that Lisbon fans dared to dream of Final success.

However, Greece had other ideas. Their negative tactics came under fire but they proved highly effective in the semi-final, containing the Czech Republic over 90 minutes and then snatching a “silver goal” from Traionas Dellas’ header from a corner seconds from the end of the first period of extra time.

In the Final, Greece employed similar tactics with a lone striker and heavy pressing to force Portuguese errors. The only goal of the game again came from a corner, Angelos Basinas swinging in a cross from the right and Charisteas rising to head past Ricardo and set the Greeks up for the most extraordinary upset ever seen at the European Championship.

Wayne Rooney became the youngest goalscorer ever in the finals when he struck against Switzerland. He held the record for four days before Johan Vonlanthen supplanted him.

Luiz Felipe Scolari guided Portugal to a quarter-final victory over England after beating the same opponents at the same stage with Brazil at the 2002 World Cup.

Dmitri Kirichenko’s goal for Russia after 68 seconds against Greece is the fastest in history of tournament finals.