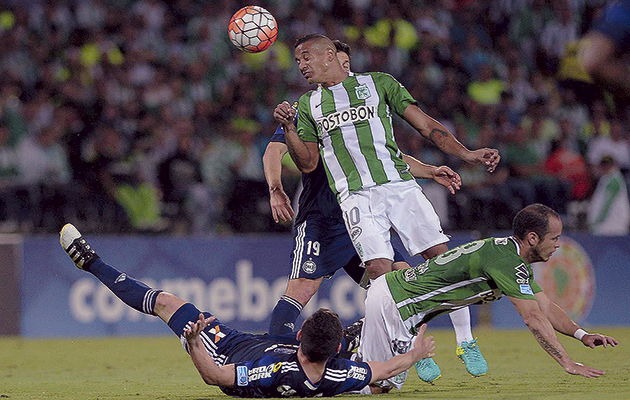 The story so far
It did not take long for the plundering to begin. Nacional won their first Libertadores Cup in 27 years with a 2-1 aggregate victory over Independiente del Valle, but the team soon broke up.

Left-winger Jonathan Copete was swept off to Brazil by Santos; loans for Colombia internationals Alex Mejia and Victor Ibaro expired; and a $10million transfer was put in place for tournament sensation Marlos Moreno to join Manchester City. Within a couple of weeks, one-time Arsenal trialist Sebastian Perez and young centre-back Davinson Sanchez had followed them out of the door.

But despite the departures, the success has continued on a number of fronts. Reserving his best XI for the Sudamericana Cup, coach Reinaldo Rueda has frequently utilised a second or even third-string team in domestic competitions. In November, Nacional lifted a record third Colombian Cup and as the regular league season progressed to the knock-out stage, Nacional sat top of the table.

Victory in the Final of the Sudamericana Cup in early December would see Nacional become the only South American club ever to have won both continental titles in the same calendar year.

Coach
Rueda led Colombia to the bronze medal at the 2003 Youth World Cup before being promoted to coach of the senior national side in 2004. However, he was sacked in 2006 by a federation who were irked at his support for the newly formed players’ union. He led Honduras (2010) and Ecuador (2014) to World Cup qualification, and when Juan Carlos Osorio left Nacional for Sao Paulo last year he personally recommended Rueda as his replacement.

Only Lionel Messi, Cristiano Ronaldo and Luis Suarez have scored more goals than Borja in world football this year. With his superb movement and finishing, he will lead the line in Japan and must surely be given a chance to play in Europe sometime soon.

The personnel may have changed, but Rueda’s possession-based attacking game remains the same. If Nacional reach the Final, he may consider a defensive shuffle by shifting Mateus Uribe into central midfield and pushing Alejandro Guerra out on the left in a rejigged 4-4-1-1. The classy Macnelly Torres is the brains of the attack.