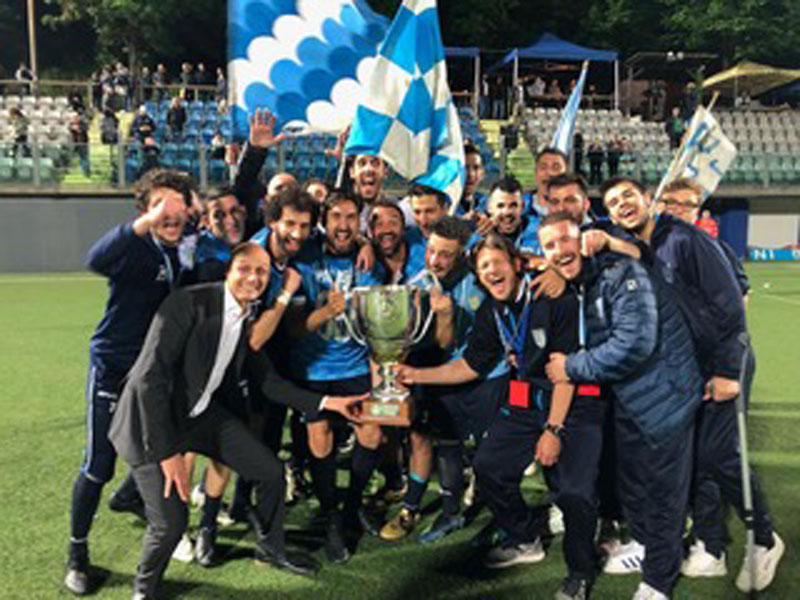 For the worst league in Europe, San Marino’s Campionato reached a thrilling conclusion.

Trailing 1-0 to holders and overwhelming favorites La Fiorita, Tre Penne found an equaliser in seven minutes of injury time with a breakaway goal from Stefano Fraternali.

As the club’s ultras, Tifosi Corretti Sambuca (TFC), used a loudhailer to broadcast support from a balcony on a building over looking the Stadio di Montecchio, Tre Penne produced their best football to win 3-1 and qualify for the Champions League preliminaries.

That was May 25. A month later, Tre Penne were out of the Champions League, eliminated 1-0 by Andorran champions FC Santa Coloma.

The rapid elimination was disappointing as, while the national team labour on as one of the world’s weakest, Sammarinese clubs are showing tentative signs of improvement. This makes watching their games more interesting for locals than La Serenissima, whose only fan group, Brigata Mai 1 Gioia, is made up of Italians.

“Sometimes its embarrassing to watch the national team,” sighs Tommaso Verzini, one of TFCs’ leaders. “That’s why we don’t follow them. The players know they are going to lose. They are going to resist and maybe to score. It makes me cry. You can feel the agony amongst the players.”

The agony has reduced at San Marino’s clubs, whose appearances in European competition used to involve heavy defeats even against clubs from other small countries. Those have mainly stopped.

“Our league has improved because there are opportunities to play in Europe and the Champions League,” says Enrico Cibelli, a Sammarinese international who plays for Tre Penne.

The 2019/20 qualifiers brought only defeats but the likes of La Fiorita have attracted some high profile players at the end of their career, such as Adrian Ricchiuti, who played in Serie A for Rimini.

In 2017, club revenue averaged €100,000, making San Marino’s teams the poorest on and off the pitch in Europe. According to UEFA’s latest financial report, Sammarinese clubs get no money from transfers and only 14% of revenue comes from gate receipts. That dropped in 2018/19 as the main stadium in Serravalle was off limits for big matches as the country joined with Italy to stage three matches in the UEFA U21 finals.

There is no money from broadcast rights either as only the Campionato final was shown on live television. Instead, clubs rely – more than anywhere else in Europe – on what UEFA describe as ‘other revenue’, which comprises 71% of income.

A cleaning company, a health clinic and the national bank sponsor La Fiorita. Tre Penne’s sponsors include a garage and a fashion boutique sponsor, while some clubs like Virtus run lotteries.

Another significant source of income is UEFA. Just appearing in the Champions League preliminaries is worth around €460,000 but last season La Fiorita only got around €10,000, says a chagrined president Roberto Bollini.

In a system almost inconceivable anywhere else in Europe, all UEFA money earned by Sammarinese clubs is pooled and split 15 ways by the national federation, the FSGC.

This has certainly produced diversity. Every club has either won the Campionato or finished runners up since the league began in 1985/86. That is also partly due to a convoluted league system that does not even include the country’s biggest side.

There are 16 clubs in San Marino. The biggest, San Marino Calcio, have financial problems and are increasingly distanced – quite literally – from local fans. The club just survived in Serie D in 2018/19 playing 75-km away in Ravenna with a team featuring hardly any Sammarinese and are losing fans.

Despite a match fixing scandal in 2017, the beneficiary has been the Campionato, which has 15 clubs after Aurora failed in the 1980s and two other sides merged in 2000.

Each September, the clubs are split into two groups, one of eight clubs and one of seven. After playing each other once, a top division is created with the top four teams from each group.

The top six teams and the leading pair from the second tier then go into a knockout. This allowed Tre Penne to overcome a lousy start to the 2018/19 season and win a place in the knockouts and eventual glory.

The win was a surprise given the strength of La Fiorita, whose squad also included the likes of former Rimini and Lecce defender Roberto de Maio, but Tre Penne is one of only five different sides to win the league since 2005/06.

The FSGC is resisting and instead opted to reduce overseas players to boost the national team.

San Marino held Turley to a 0-0 draw in 1993 in their first World Cup qualifying campaign, but results remain rare at any level.

In 2013, San Marino’s U21 team beat Wales 1-0 in a UEFA qualifier for the country’s first competitive win. Under Pierangelo Manzaroli, the U21s kept another clean sheet in the same qualifiers, holding Finland 0-0 at home.

Manzaroli took charge of the senior team in 2014 and that November San Marino held Estonia 0-0 in a European qualifier, avoiding defeat for the first time in a decade. Since then, every senior match has been lost and even goals remain rare.

“We play against players like Rooney on the Xbox and then we play against them for real,” marvels Mrko Palazzi, who scored against Azerbaijan in 2017 and in more than 50 national appearances has played twice at Wembley against England, losing both games 5-0.

Of all the small countries in UEFA, San Marino has been the only one to show virtually no signs of improvement.

After an 8-0 thrashing by Germany in World Cup qualifying in 2016, Bayern Munich’s Thomas Muller said games with the 61 sq km republic were pointless.

In response, the federation issued a stinging 10-point rebuttal but the FSGC has not helped itself and refuses to nationalise players. While this idealistic stance has some sympathisers, pressure for change is growing.

“People say we should look for the next Massimo Bonini but he is famous because of what he did with Juventus,” sighs Bollini. “But we should be looking for the next Andy Selva, who was from Rome.”

Bonini famously did much of the running as a defensive midfielder behind Michel Platini in Juventus’ legendary 1980s side. Born in San Marino, he rebuffed numerous approaches to play for the Azurri as this would have meant giving up his Sammarinese passport.

After Bonini, the eccentric Andy Selva is probably the best-known Sammarinese player. Born in Rome to a Sammarinese mother, Selva played professionally in Italy for Padova, SPAL and Verona and is the national team’s top scorer with eight goals in 73 matches between 1998 and 2016. His international tally includes the goal in San Marino’s sole international win in a 1-0 victory over Liechtenstein in a friendly in July 2004.

To the frustration of locals like Bollini, the FSGC does not appear interested in looking for eligible Sammarinese players a diaspora that some locals believe exceeds the domestic population of 33,400.

During World War Two, San Marino tried to stay neutral but fearing this was impossible some locals fled abroad. This continued after the war, creating a diaspora in places as disparate as Buenos Aires and Detroit.

Rather than look for eligible players, the FSGC has tinkering with eligibility rules in the Campionato.  Previously, clubs could have no more than half a dozen foreigners in their squads. This proved easy to get round, as any players with a work permit counted as local.

From 2018/19, all clubs had to have a minimum of two players eligible for the national team on the pitch at all times. In the heat of a match, that can be a challenge as Tre Penne found out.

At the start of last season, Palazzi was injured in a game against Folgore. When Cibelli was then substituted, Alex Gasperoni was the only Sammarinese player left on the pitch. The match finished 0-0 but the FSGC awarded Folgore a 3-0 win.

No other clubs subsequently fell foul of the new rule, but two players is not enough for Manzaroli or the eternally popular Giampaolo Mazza, the national coach from 1998 to 2013, who says:“We need more.”

If the FSGC does increase the quota, the clubs are likely to demand reform of the system of sharing UEFA money to benefit the bigger clubs … just like the rest of Europe.