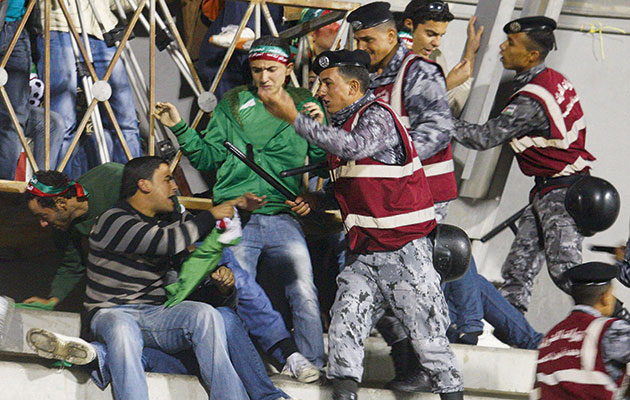 Derbies that make headlines around the world are usually dripping in intrigue, politics, farce and violence amid the 90 minutes of actual football. But the fiercest derby in Jordan has been elevated far beyond even that: it has made it to diplomatic level.

In 2009, a diplomatic cable titled “Jordanian Soccer Game Halted Amidst Anti-Regime Chants, Hooliganism, Towards Palestinians” was purportedly sent by the US embassy in the capital, Amman, and later released by the Wikileaks website. In it, the depths of Jordan’s Al Classico were laid bare.

“Anti-Palestinian hooliganism and slogans denigrating the Palestinian origins of both the Queen and the Crown Prince led to the cancellation of a July 17 soccer game between the rival Faisali and Wahdat clubs [sic], who traditionally represent the East Banker and Palestinian communities, respectively,” read the cable.

“Matches between the two teams have a long history of violence,” it went on. “The game exposed the growing rift between East Bankers and Palestinians in Jordan.

“The King’s silence on the event is noteworthy, as is a reluctance among our contacts to discuss the issue.”

The Faisaly-Wehdat derby doesn’t have the size of the Cairo derby or the colour and pageantry of the Tehran derby. But, in terms of political significance, it is intertwined with the political currents of the region over the past 60 years, and few can beat it.

The two teams are part of a duopoly every bit as total as those in Spain or Scotland, and over the past 31 seasons Al Faisaly and Al Wehdat have won all but two league titles. But it is the symbolism of what both teams represent to their respective communities that gives the game its huge political significance in Jordan and beyond.

Wehdat have their roots in the Amman New Camp in the southern suburbs of the capital. The refugee camp was set up after tens of thousands of Palestinians fled their lands after the creation of the State of Israel in 1948, a date which is celebrated there but called Al Naqba (the catastrophe) by the Palestinians.

The club’s kit is the colour of the Palestinian flag and its badge features a torch in front of the Golden Dome of the Al Aqsa Mosque in Jerusalem. Fans and players alike sing: “Allah, Wehdat, Al Quds Arabyia” (God, Wehdat, Jerusalem for the Arabs). Yasser Arafat, the former leader of the Palestinian Liberation Organisation (PLO) once based his organisation in Jordan and called Wehdat the national football team of the Palestinians, long before Palestine was granted that right by FIFA in 1998.

After successive waves of immigration following wars between the Arab world and Israel, Palestinians now make up anywhere between 50 to 80 per cent of Jordan’s population. “For Wehdat, 99 per cent of the fans are Palestinian,” says Tareq Khoury, the wealthy Christian Palestinian businessman who is president of the club, as well as a prominent Jordanian parliamentarian. “You won’t find any Jordanian fans of Wehdat.”

Al Faisaly, on the other hand, are seen as the team of the true Jordanians, the “East Bankers” – referring to the fact that they come from the East Bank of the River Jordan, as opposed to the Palestinians from the West Bank. And the team traditionally dominated the league, just as the East Bankers traditionally dominated positions in the government, the army and the police.

In 1970 the tension between the two clubs almost led to civil war when King Hussein, father of Jordan’s current ruler King Abdullah, led a military campaign against the PLO, who had created a state within a state. Thousands died during what is now known as “Black September” and overt Palestinian nationalism was banned. 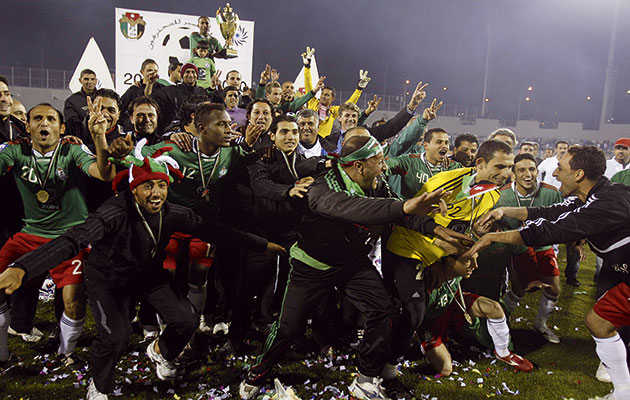 These days the tension between Faisaly and Wehdat is rarely mentioned in public, except when they play each other.

“In the heat of the game, where large crowds gather, repressed feelings may be vented in the public sphere,” explains Professor Yasir Suleiman of Cambridge University, who is an expert on the undercurrents in Jordanian society. “The authorities know this but, as long as the events are not overloaded, they tend to tolerate the political in football.”

Suleiman was referring to chants such as that sung by Faisaly’s fans, who cry: “One, Two, Three, Divorce Her You Father of Hussein”, directed to the King of Jordan – and brother of the current FIFA presidential hopeful Prince Ali of Jordan – who married Queen Alia, a Palestinian American.

Over the years, the matches have been dominated by violence. In 2008 the police beat unarmed Wehdat fans after they had won the league title and were playing Faisaly in the last game of the season. In 2010, 50 Wehdat fans were injured after a stadium crush when Faisaly fans pelted them with rocks. When the fans tried to escape, they were then beaten back by the police, according to a report by Al Jazeera.

In recent seasons there has been an attempt to take the sting out of the rivalry. Jordan’s national team, made up mostly of players from Faisaly and Wehdat, has enjoyed unprecedented success in recent years, even reaching the final play-off round for the 2014 World Cup finals, which it eventually lost to Uruguay.

“They are rivals on the pitch,” said Prince Ali in 2013, when asked about how the tension between the two teams affects the national team. “I think the rivalry has helped us because there’s so much emotion behind it.”

But even with the success of the national team, the league rivalry remains fierce. Earlier this year a campaign was launched to change the colour of the uniforms worn by Amman’s street cleaners as their bright orange jumpsuits were considered too similar to the uniforms the so-called Islamic State, or Daesh, use for their prisoners shortly before executions.

An online poll was held to decide which colour to use instead, and turquoise was chosen. There was just one problem.

“The new uniforms’ colour…was claimed to be too close to the strip of Faisaly,” reported the Daily Telegraph. As with all the fiercest derbies in world football, the rivalry sometimes emerges in the most unexpected of places.