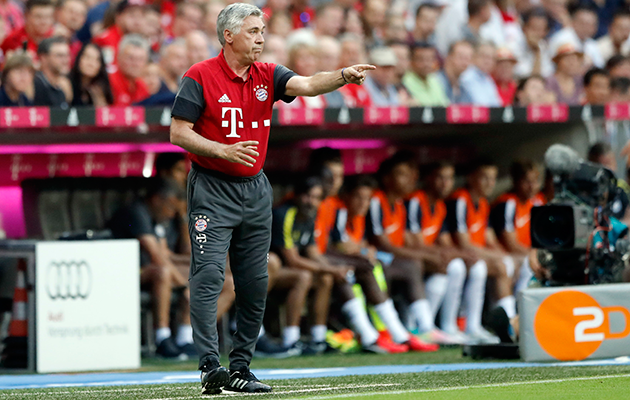 Working on the logical assumption that this season’s title winner will be either reigning champions Bayern Munich or last term’s runners-up Borussia Dortmund, various tie-breakers could come into play – not least which of the Bundesliga juggernauts best handles a campaign of transition and upheaval.

The times they are a-changin’ for both outfits, with Bayern waving goodbye to coaching icon Pep Guardiola and replacing him with gentleman trophy-hunter Carlo Ancelotti, and Dortmund forced to raze and reconstruct after a whirlwind summer of comings and goings.

While Ancelotti was at pains during his first Bayern press conference to frame himself as the continuity option – “I’m not here to start a revolution” – he inevitably will bring new ideas to the table, and in terms of tactics there is likely to be quite a difference.

There will be no more Pep-style three-man defence or constant changes of formation. Mindful of fitting his players to the system and not vice versa, Ancelotti teams tend to sit deeper in defence, have more of a wait-and-see approach and, in marked contrast to Guardiola, are not nearly as obsessed with ball-retention. “You can’t win any match by possession alone,” the pragmatic “Carletto” once declared.

Ancelotti is, in many ways, the polar opposite of Guardiola: more laid-back, closer to his players and never treating the game as a laboratory experiment. Easy to respect and work with, yet still will need time to find his bearings and put his message across.

Six hundred kilometers north-west in Dortmund, coach Thomas Tuchel faces an even more complicated task with the biggest personnel refit at the Westfalenstadion in at least a decade. With three of the club’s most influential players – skipper and centre-back Mats Hummels (Bayern), schemer Ilkay Gundogan (Manchester City) and attacking midfielder Henrikh Mkhitaryan (Manchester United) – all flying the coop and eight individuals checking in, a good third of the first-team squad has changed, the sort of of flux most teams would want to avoid.

Tuchel admits that placing such faith in youth could be conceived as a gamble. However, he also insists that the club ultimately had no choice, insisting: “We’ve lost some world-class talent this summer. We went to our limits to keep them, but have to accept there are more attractive clubs, those who are a step ahead of us in business and financial power.

“We’ve decided to go forward with talent and potential. We’ve brought in young players with personality, desire, creativity and a sparkle in their eye. We’re hoping to be surprised as to where it will all lead. It’s a risky road, but are hoping it will pay off. It feels like a new beginning. We all have to be adaptable and come up with a new way of playing, one which gives us results and lets the youngsters express themselves.”

As well as investing in next-generation ability, the Dortmunder also have been shopping at the top end of the market, spending E30million on Wolfsburg wide-man Andre Schurrle and another E25m on returning prodigal son Mario Gotze, who in his three seasons at Bayern looked anything but an attacking virtuoso.

Although neither “Supermario” nor Schurrle have set the Bundesliga alight in recent times, both are class acts, each a world champion, and it would be no surprise at all if the ever-shrewd Tuchel managed to rekindle their respective flames.

The Bundesliga’s top scorers last season with 82 goals, Dortmund should be confident of maintaining that type of strike rate, there is danger wherever you look. The quick-feet and vision of Gotze and Schurrle now aligned wit the incisiveness and touch of Marco Reus – who after missing Euro 2016 with a groin injury, should be operational by September at the latest – and the  dead-eye finishing of leading scorer Pierre-Emerick Aubameyang, who despite several attempts to lure him to Premiership has, crucially, stayed loyal.

Of course, Bayern, champions for the past four years, are strong favourites to prevail again. They have two or three A-grade players in every position, an exceedingly safe pair of hands in Ancelotti and have not overly tinkered with a strong squad, happy only to bring in Hummels – who once was a youth-teamer in Munich – and indefatigable teenage Benfica and Portugal midfielder Renato Sanches.

Ancelotti, the winner of 16 major titles in his coaching career, including three Champions Leagues, never shouts and screams, never wields the big stick. Yet in his own quiet, understated way he always manages to get the job done and is a master in promoting harmony in groups jam-packed with superstar egos.

“I think all top coaches do good tactical work,” claimed Ancelotti in an interview with France Football magazine late last year. “In my opinion, what makes the difference results-wise is the hunger, motivation, solidarity and collective efforts of the team. The nuance comes from the personality and psychology of the coach. You have a problem when the coach says ‘we’ and the players think ‘me’. It all becomes so much easier when a player puts the collective first.”

Hopes of one day emulating the Bayern-Dortmund pre-eminence are very much alive in other top-flight locations. Schalke, determined to regain a Champions League spot after two blank campaigns, are confident their newly appointed high command of CEO Christian Heidel (ex-Mainz) and coach Markus Weinzierl (formerly with Augsburg) is the winning ticket. The early signs have been promising, with Weinzierl impressing with his down-to-earth character, enthusiasm and communication skills, and Heidel excelling in the transfer market, especially in his successful swoops for Basle and Switzerland striker Breel Embolo and battle-hardened Brazilian central defender, Naldo, a gift-wrapped free transfer from Wolfsburg.

Heidel says that one of his top priorities is to rid the Royal Blues of their long-standing tradition for internal wrangling, for turning drama into a crisis. If he is true to his world, the Gelsenkirchener could be in business.

Another club fizzing with ambition are top-flight new boys RB Leipzig, one of the footballing branches of the Red Bull soft-drink empire. And for many fans around the country, they are theferore the antithesis of what the game should be: corporate, synthetic and soulless; a mirror image of the German League’s famous “50+1” rule, where club members hold the controlling stake.

But like or not, RB probably are here to stay, and for all their financial muscle, there has been an organic element to their development, invariably preferring to buy young tyros rather than veterans with little left to prove. Typically, all their signings this summer are “works in progress”, fine prospects such as dynamic midfielder Naby Keita  and versatile defender, Benno Schmitz – both from sister outfit Red Bull Salzburg in Austria – and talented Stuttgart forward Timo Werner.

RB Leipzig sporting director Ralf Rangnick – who last season led them to the promised land as coach before handing over the reins to ex-Ingolstadt boss Ralph Hasenhuttl – is wisely not putting the cart before the horse. His goal for the forthcoming season is simply to stay out of the relegation zone, then to take it from there, hopefully qualifying for Europe a couple of years down the line.

Who knows if they will be able to break up the established order. But it’s going to be fun watching them try.