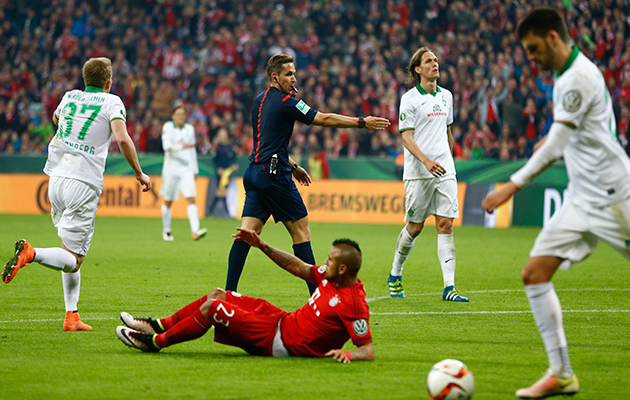 1. Germany has its dream cup final. Again
For the fourth time in the last eight years, the Bundesliga’s two strongest armadas, Bayern Munich and Dortmund, will sail into battle in the DFB Cup showpiece in Berlin on May 21.

Truth to tell, neither semi was a scenario of suspense, the Dortmunder running out comfortable 3-0 winners away to a curiously restrained Hertha Berlin, while Bayern, though not at their imperious best, still had too much savvy and class for Bremen, sealing a 2-0 win at the the Allianz-Arena thanks to a brace from the inimitable Thomas Müller.

His second goal, a penalty, came as a result of what most onlookers considered a clear dive in the box by Bayern midfielder, Arturo Vidal and needless to say, the visitors were singularly unimpressed.

“What happened here had nothing to do with football,” stormed Bremen centre-back, Jannick Vestergaard. “It’s contrary to the moral of sport and literally broke our necks.”

Over the last two decades, there have been two instances of German players being retrospectively punished for diving (Dortmund’s Andy Möller in 1995 and Sven Gunther of Jena ten years ago), but in the case of Vidal, the federation have opted not to take the matter any further.

2. Hannover: Over and out
Victorious in only two Bundesliga games this year and dead men walking for almost the entire campaign, the Reds’ hook-up to life support finally was disconnected on Sunday, their 14-year tenure in the top-flight officially brought to a mathematical end when fellow basement dwellers, Eintracht Frankfurt surprisingly beat Mainz 2-1 at the Waldstadion.

A Hanoverian disaster from start to finish. A self-inflicted tale of boardroom complacency, terrible personnel choices and coaching instability, with three bosses (Michael Frontzeck, Thomas Schaaf and latterly, Daniel Stendel) all forced to operate on a wing and a prayer.

Club president, Martin Kind, might have made a fortune with his hearing aid business, but as a listener in the world of football, he has left much to be desired – deaf to every warning of impending doom.

3. Bremen lose the numbers game
Relegation-threatened Werder Bremen’s 2-1 loss at Hamburg in the 104th ‘Nordderby‘ was replete with data of despair.

The former’s ninth away defeat this term, 63rd goal in the back of their net – making them the leakiest back-line in the league along with Stuttgart – and for the first time since 1967-68, pointless from the season’s regional head-to-heads.

It might have been all so different if veteran Bremen striker, Claudio Pizarro, had not missed a second-half penalty. But in mitigation, he was facing saving expert in Hamburg back-up keeper, Jaroslav Drobny, who has kept out four of his last six ‘elfmeter’.

4. Leno to leave?
Rumours continue to circulate in and around the BayArena that Leverkusen and Young Germany keeper, Bernd Leno, is to pack his bags at the end of the season.

Although under contract to the Rhinelander until 2018, he does have the benefit of a springtime release clause, whereby he can bought for the extremely reasonable sum of 18 million euros.

The 24-year-old is thought to be a target for Tottenham and also has been linked with Dortmund and enormously ambitious second division is, the “best German goalie after Manuel Neuer,” Leverkusen general manager, Jonas Boldt, told Express newspaper in Köln. “We want him to stay with us for the long-term and are not ruling out another contract extension. ”

5. Because we’re worth it
Darmstadt striker, Sandro Wagner, one of the most in-form finishers in the country at the moment, will not have particularly endeared himself to the fan in the street with his strident denial that modern-day pros were not overpaid.

In an interview with the tabloid, Bild, the rangy centre-forward claimed that players were “worth every penny”, citing the “tremendous pressure” and need for personal sacrifices from an early age.

“It’s a free market business. Supply and demand,” he said. “On the basis of all that you have to give up, I even think Bayern stars earn too little. We need to get away from this culture of envy. In England, for example, the fans love it when you turn up in a smart car. Here, you have to park it five streets away so no one takes offence. I find it laughable. “