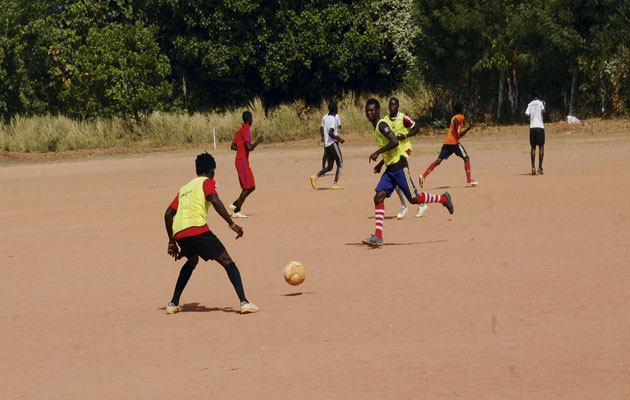 Guinea-Bissau first entered the African Nations Cup in 1994, after which they either withdrew – or were banned due to withdrawing – from six of the next seven tournaments. And while the West African country has at least entered every World Cup qualifying campaign since France 1998, reaching the finals has always been extremely unlikely.

Yet with the road to Russia 2018 beginning in October for the former Portuguese colony, Manuel Lopes Nascimento, who is president of the country’s football federation, hopes this time things will be different.

“We have the best young players in west Africa,” says Nascimento, who plans to visit eligible players at clubs ranging from Barcelona, Benfica and Sporting Lisbon to Everton and Liverpool after April’s CAF congress in Cairo. “Our problem is not skills, it’s infrastructure and investment. The government has an obligation to help. If I can create the right conditions I can get some of them.”

Getting that help in a country at the top end of the Fund for Peace’s “failed state” ranking is hard. Guinea-Bissau may have succeeded in evading the Ebola epidemic that plagued neighbouring Guinea, but Nascimento’s homeland is, according to the United Nations Office on Drugs & Crime, a major trans-shipment hub for the cocaine trade. But illegal drugs are not the only product flowing out of the country; so too are young footballers.

In 2013, much-travelled English coach Stephen Constantine was invited to Guinea-Bissau with a view to taking the national coach’s job. “There is huge potential but it’s an absolute mess internally and zero infrastructure,” says Constantine, who is now India’s coach.

“Most of their players are in Portugal and sent out early doors so they avoid paying the local clubs any money.”

Though freed from Portugal’s empire in 1974, Guinea-Bissau still has close links. Players are routinely taken to Europe at a young age and re-nationalised. “Benfica and Sporting come to search for players, but that is not our agreement with them,” says Nascimento.

The story of Edgar le and Agostinho Ca is typical. Born in Guinea-Bissau, the pair moved to Europe as teenagers, first joining Sporting Lisbon and then Barcelona in 2012. Though neither has made a senior Barca appearance, both have played junior representative football for Portugal.

That story is replicated with alarming regularity. Other Guinea-Bissauan players to follow the same route range from Maritimo’s Danilo Pereira to Amido Balde, who is now playing in Israel after being loaned to Hapoel Tel Aviv by Celtic, and Carlos Mane at Sporting Lisbon.

So too did Francisco Junior and Yalany Baio. Now at Everton and Liverpool respectively, the pair are finding a senior start hard to come by, but at least they are with a major European club.

Some young Guinea-Bissauans, particularly in Portugal, are recruited before they are 16 to make getting a visa easier but then released and abandoned after failing to make the grade.

“I know a few cases of young players who had a rough time at the hands of people who were only interested in their football ability and not so much their social or living conditions,” says 36-year-old international defender Bruno Fernandes, who now plays for Welsh Premier League side Cefn Druids.

Along with Junior and Baio, Fernandes is one of a number of Guinea-Bissauan players to congregate in the UK. His brother, Valter, plays for Skelmersdale United in the Northern Premier League, while goalkeeper Germano Mendes is with Vauxhall Motors.

The father figure to these players is Causo Seidi, a coach working with young English football agent Patrick Elsmore Dodsworth to find an alternative to the exploitation of young Guinea-Bissauans.

“It’s quite tragic, there’s a lot of extracting but not much inward investment. There is no registration,” says Elsmore Dodsworth, who was negotiating to buy Guinea-Bissauan second-tier side Ondame and rename it Vida Sports.

He has since changed his approach. With Seidi and Ondame, he wants to bring over a handful of carefully chosen youngsters using funds raised by representing one of the Guinea-Bissauan stars playing in Europe.

Getting visas remains a problem and that approach might sound like another version of exploitation, but Elsmore Dodsworth insists it is not.

“There are a lot of people with good intentions out there, but if you don’t have the resources it’s pointless,” he says.