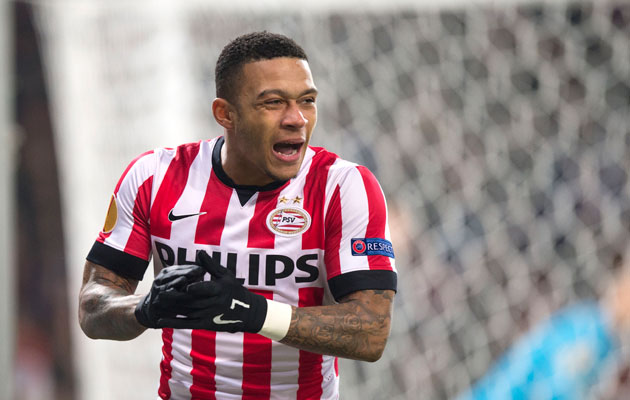 While it was a season to remember for many of the country’s smaller clubs, most of Holland’s top sides will hope to erase all memory of the 59th edition of the Eredivisie.

The exception to this rule, however, was PSV, who won the title for the first time in seven years.
Much of their success was down to the bond between Memphis Depay and Georginio Wijnaldum who, after a highly successful World Cup together, both decided against moving abroad and opted to stay in Eindhoven for the 2014-15 season. That decision paid off handsomely, with Depay scoring 22 goals before earning a ¤25million transfer to Manchester United. Club skipper Wijnaldum was maybe less spectacular but just as vital in keeping his team-mates focused on the ultimate goal.

Right from the start there was little doubt who the best team in Holland were. Depay and Wijnaldum were well supported by the prolific Luuk De Jong, who managed 20 goals following unsuccessful spells
at Newcastle United and Borussia Monchengladbach; left-back Jetro Willems, who was second in the season’s assists rankings; and the 28-year-old Mexico international Andres Guardado, who kept an attack-minded team together.

The title was also a huge boost for Phillip Cocu, who was heavily criticised in his first year in charge and missed the end of the season due to a tumour in his back. He also became the third man – after Eric Gerets and Ronald Koeman – to win titles with PSV as both a player and a coach

Ajax had their traditional setback before the winter break but, unlike in the previous four campaigns, this time Frank De Boer’s team couldn’t make up ground. Supporters reacted with anger at the directors’ announcement that they needed to raise ticket prices next season “in order to keep up with the European giants” while expecting the fans to watch a lacklustre team every home game.

According to Jonk, those squad places should be filled by recruits from the academy. Things got so bad that even Johan Cruyff himself arrived in Amsterdam to try to sort things out.

Things weren’t much better at Feyenoord, who managed to throw away their entire season in the final stages.

Five weeks before the end of the campaign they looked set to finish in third place – which guarantees automatic qualification to the Europa League group stage – by beating AZ. But after collecting just two points in their last five games they slipped to fourth. The Rotterdam club then fell at the first hurdle in the play-offs.

Feyenoord coach Fred Rutten didn’t even make it to the play-offs and was sacked as soon as the league finished, but his successor Giovanni Van Bronckhorst was unable to repair the damage.

Arguably the biggest loser has been Twente, who had a six-point deduction imposed due to financial chaos. In a bid to stay at the top of the tree after winning the title in 2010, megalomanic chairman Joop Munsterman took far too many risks, paying extraordinary salaries to mediocre players while facing increasing debt repayments on the stadium and missing out on potential millions as they repeatedly failed to qualify for the Champions League.

Munsterman, who sold the club’s transfer rights to the Doyen Sports Group, took control of everything on his own and his fellow board members only found out what was going on when it was too late.
A recovery plan is now in place, but it will take time. Meanwhile, the fans have lost patience with coach Alfred Schreuder and his position would seem at risk were it not for the fact that sacking a man who was given a contract by Munsterman until 2019 would only add to Twente’s debts. In fact, the club’s financial situation is so dire that they turned down the chance to play in the Europe League qualifiers next term after Holland was awarded an extra spot by finishing top of the fair play ranking. Instead, Go Ahead Eagles, who were relegated, will take their place.

Where there are losers, there are also winners, of course, and AZ did extremely well to overcome a crisis of their own. Early in the season, Marco Van Basten found the personal pressure too much and stepped back to become an assistant. The club’s number two, Alex Pastoor, took over but within a few weeks he was gone after a difference of opinion with his new assistant. In September, former Anderlecht boss John Van den Brom arrived and, with Van Basten still on board, he led the club to third place.

Special praise should also go to Groningen, who won the Dutch Cup for the first time, and Willem II, who came up from the second tier and finished ninth. They will be the blueprint for NEC, who return to the top flight after just one season’s absence. And with the Nijmegen club collecting a record 101 points on their way to promotion, why shouldn’t they continue to grow in a league where the small clubs seem to win more and more every year?

PLAYER OF THE SEASON
Memphis Depay (PSV)
The league’s top scorer agreed a deal to join Manchester United next season. Played for current United boss Louis Van Gaal at the 2014 World Cup, where he became Holland’s youngest scorer at a finals.

NEWCOMER OF THE SEASON
Andres Guardado (PSV)
The Mexican winger joined on loan from Valencia last summer and his experience was just what a young team needed to make the final push for the championship. Has now signed a deal tieing him to PSV for three years.

COACH OF THE SEASON
Jurgen Streppel (Willem II)
Led the Tilburg-based club to ninth place in their first year back at the highest level. His side played attractive football while also proving hard to beat.

CUP WINNERS
Groningen won silverware for the first time in their history, beating holders PEC Zwolle 2-0 in the Final, at De Kuip stadium in Rotterdam, with two goals from Albert Rusnak.