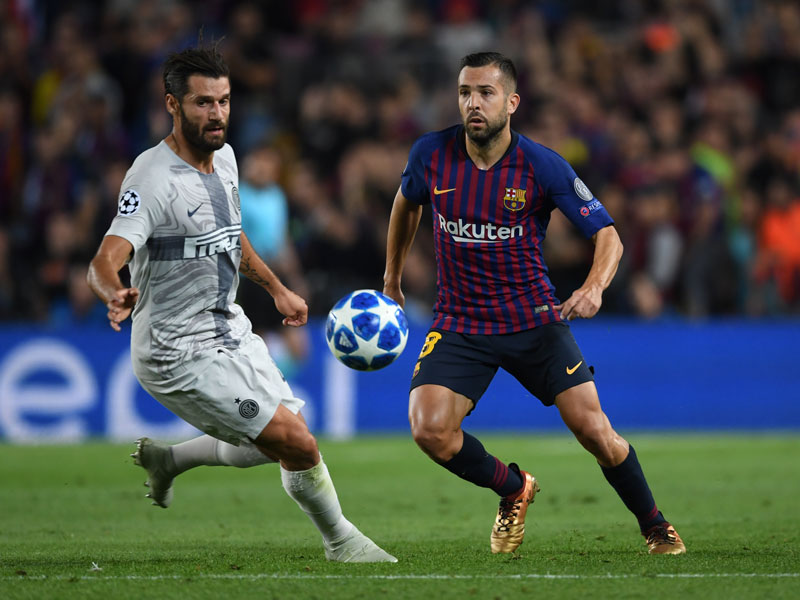 Paddy Agnew’s Notes From Italy: Inter vs Barcelona: Time To Make That Leap Of Quality?

For Inter Milan, as they prepare for a fascinating home Champions League tie against Barcelona tonight, it is time to shape up. This evening’s game, win or lose, will probably not of itself stop Inter from qualifying for the second round but it could prove to be a watershed moment in their thus far, topsy-turvy season.
Beaten by Sassuolo on the opening day of Serie A, Inter then went on to draw with Torino, beat Bologna and lose to Parma in their next three games.   Four points from four games is not exactly a title challenging strike rate. Remember, this is a club whose seasonal aspiration is to at least repeat last season’s performance in securing the 4th place finish that guarantees a Champions League place.
In the wake of that unsteady start, and not without difficulty, Inter have got their act together. Saturday’s 5-0 demolition job of Genoa was their seventh straight Serie A success and their ninth win in their last ten outings if you include their Champions League programme. Inter are currently joint second in Serie A on 25 points, six behind leaders Juventus,
The problem is that tenth match, the one they lost. That came two weeks ago at the Camp Nou when Barcelona, without Lionel Messi, beat them 2-0 in a game dominated by the Catalan side as witness the possession stats of 67.1% Barca and 32.9% Inter. Rafinha, Coutinho, Sergi Roberto and Jordi Alba, to name but the most obvious, did as they pleased against an Inter side which went missing and ended up looking like the proverbial rabbit caught in the Camp Nou headlights.
Coach Luciano Spalletti believes his side can do much better than that. He was the first to criticise the team two weeks ago, saying:
“In the first half…we gave the impression of having no courage for the fight and that is the thing that I mind most”.
In the wake of Saturday’s emphatic win, Spalletti acknowledged that if ever there was a good moment to play Barcelona, it was right now, saying:
“This is a good moment to play against Barca again, with the wind in your sails, you can be more courageous. Above all, we cannot allow them to dominate possession, rather we’ve got to hold onto the ball and knock it about.
“They will come out ready to chase after us right from the start because, in the first leg, we found it really difficult to play faced with the the intensity of their game…But, we know how to do a thing or two and I am curious to see how we will get on this time…”
The one item of good news for Inter two weeks ago came from the other game in their group in which Tottenham draw 2-2 away to PSV Eindhoven.   Having beaten both those sides in their first two group games, that 2-2 draw suited Inter perfectly, leaving them five points clear of both.
[collection name=”small” accordion=”mobile” excerpt=8]
A second place finish behind Barca is clearly still within Inter’s grasp but Spalletti and his club directors would very much like to see Inter achieve that through their own results and not thanks to the points dropped by their rivals. That is the sense in which a good performance tonight, in the shape of a draw or at the very least a hard-fought honourable defeat, matters.
A good peformance tonight, let alone a win, could truly boost an Inter juggernaut that clearly is just beginning to fire on all cylinders. A good result would suggest that the ambitious plans of their Chinese owners, the Zhang family of the Suning corporation, are not just pie in the sky.
Inter can take heart from the fact that their Belgian international, Radja Nainggolan, missing from the first leg will be back for tonight. In four very successful seasons at AS Roma, Nainggolan often proved to be a key physical force, a midfield ball winner of both attacking quality and distinctly “steely” temperament. Spalletti, who coached him for one and a half of those seasons at Roma, will clearly be looking to the Belgian (who moved to Inter this summer for €38 million euro) to stiffen up the his midfield.
Inter may also be encouraged by the fact that Messi will probably start tonight on the bench, given that his broken right arm may not yet be match ready given that he fractured it just 17 days ago against Seville. However, that looks like cold comfort when you realise that Messi was also missing from Barca’s 5-1 destruction job of Real Madrid last weekend as well as a Liga win against Rayo Vallecano and a Spanish Cup win against second division Leonessa, not to mention that Champions League game v Inter themselves two weeks ago.
There was a time, in terms of both economic and football results, that Inter could compete with Barcelona. 14 years ago, the clubs earned pratically the same, with the Barca turnover being €169 million as opposed to Inter on €166 million. Eight years ago, on the way to that mythical treble under the coaching of José Mourinho, Inter booked a place in the Champions League final when eliminating Barcelona (3-1 and 0-1) at the semi-final stage.
A lot of water has flown under the bridge since then. Italian football has lost a lot of ground, whilst the Barcelona turover now dwarfs that of Inter, €693 million to €297 million. However, with an almost all foreigner line-up that looks suspiciously like that of Mourinho eight years ago, can Inter step up to the mark?
Can Argentine Icardi in attack, Croat Perisic on the wing, Croat playmaker Brozovic and Uruguyan Vecino in midfield, Dutchman De Vrij and Slovak Skriniar in defence, to name just some, wind back the clock, even just a bit? A good performance tonight could mean a lot of things, at home and abroad.