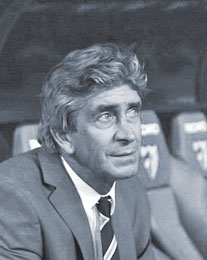 World Soccer: What was it that brought you to Malaga?

Manuel Pellegrini: The key was the intention that the directors had to build a great Malaga and the credibility of the way the club wanted to go about it. When I spoke to them they explained the plans, which involved not just buying players for the first team but to develop the whole structure of the club.

But Malaga were bottom. You must have had doubts?

No one guarantees that you are going to succeed. At times, football can be tiring and the pressure can take its toll. It is true you cannot control all the factors that decide if results go your way, but you accept that.

What is your role at the club? Are you limited to coaching the first team?

No. I have been able to intervene in various areas of the club, such as the development of the new training ground, the construction of the squad. Together we are trying to build a project that is not just short term, but for four years and beyond that. Not just with Antonio Fernandez, but with Abdullah Ghubn and Jose Carlos Perez. I have a voice. With Antonio Fernandez, the names I suggest are the first ones we go for – we have a good relationship.

It is striking that there has been stability at critical moments. You stayed at the club even when it looked like there was a genuine risk of relegation last season…

The club is very clear that this is not just a six-month project or a one-year project. When I was at Villarreal I was fortunate that we were able to build stability and then work with it for five years. When there were difficult moments the stability helped. In that sense, this is similar. When we were struggling, I told them that if they were not completely sure about me, if they didn’t have confidence in me, that we could end the contract. I would not want any more money. But they had faith in me and that faith helps consolidate the project.

We extended my contract when there might have been doubts around my future. I think this club has a solid base and that it can, not immediately, but in a prudent amount of time, become one of Spain’s big teams.

Villarreal appeared to be pressure free compared to what you had to endure at Real Madrid. How does that compare to here?

Villarreal, Malaga, Madrid…there’s pressure everywhere. The internal pressure that you impose upon yourself is much greater than the external pressure. I never took a decision based upon what was being said from the outside. When the results are bad, I can assure you that the pressure is the same at every club in the world.

What about the expectations? Realistically, what are they?

Medium and long-term, I have no doubt that this will be one of the big clubs in Spain, consistently playing in European competitions. That is the objective. It’s not an objective for this year – although I am hopeful – but one for us to grow towards. Objectives have to be longer term: the development of the team and the club.

If when I had arrived at Villarreal I had said we would get to the semi-final of the Champions League or finish second in the league, they would have said we were mad. It’s similar here. We cannot create false expectations but nor can we have no expectations.

Is competing with Real Madrid and Barcelona possible?

People hope so and I am not going to take that hope from them.

But, surely, you must put the brakes on?

Well, you have to be clear about the reality. There are two clubs that are a long, long way above the rest, Then there are five clubs: Sevilla, Villarreal, Valencia, Atletico and Athletic. They have squads that are as good or better than Malaga’s and they have been building them for longer. But that is where we aspire to be.

Despite fighting relegation, does last season show what you can do?

If you look at the last three months, we were a good side. In the final weeks of the season we were the team that picked up the most points. Our aim has to be to continue in a similar way. We will continue to have the same aims: to be attacking, to try to take control of the game, to take responsibility, to be attractive. I have always had that. There are small differences, of course, depending on what players you have, but there is a footballing concept and a concept of spectacle that is non negotiable.

Is there also a human concept? You seem to have been very careful about what kind of players you sign…

That’s fundamental, totally fundamental. We wanted players with sufficient maturity, with human qualities as well as footballing ones that can help. Ruud [Van Nistelrooy] is an example for the younger players. And not just because of what he does on the pitch but because of everything about him: the way he looks after himself, the way he behaves as a person.

Santi, Demichelis, Baptista, Toulalan, Maresca – they have a winning mentality, they know what the elite is like and they still have the desire to play. They are driven internally, not externally. That is vital. We wanted players with talent but we also wanted people to provide a base for Malaga to grow for many years.

This interview was originally published in the October 2011 issue of World Soccer.