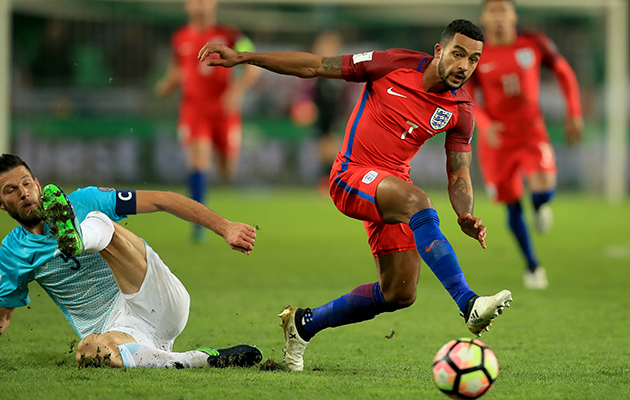 England’s wretched display in Ljubljana teetered on the brink of catastrophe had it not been for a glorious Banks like exhibition of goalkeeping from a resuscitated Joe Hart.

England would surely have lost to a team which didn’t even include its star player who had strangely insisted that he was not in a fit condition to play.

Hart was superlative, all bleak memories of his failings in the European finals banished. Twice he had to redeem appalling errors by his own colleagues, once when a bemused Eric Dier under hit a back pass and exposed England’s goal, again when another errant back pass had him flying out of his goal to prevent disaster. Above all there was the glorious double save which ended with his crashing painfully into the right-hand post.

In front of him England’s shaky defence never mastered a bright and ambitious Slovenian attack in which Kurtic and Illchich were lively and outstanding. It was a match and a hapless performance which raised great questions about Gareth Southgate’s credentials as an England manager.

The pitch, as he complained, may have been uneven, the basic errors in the defence hardly his fault, but his choices were surely open to serious criticism.

How could he persist with Theo Walcott on the right flank when he had looked so ineffectual against humble Malta at Wembley, whatever his recent bright form for Arsenal, and here against Slovenia was anonymous?

This, while Andros Townsend, who has never failed when playing for England, was waiting on the bench and duly if belatedly came on as a lively and effective substitute? Townsend, who clearly has the big match temperament, must surely be wondering what he has to do to gain preferment. For all his lively appearances in the England attack, Roy Hodgson didn’t even take him to France.

Then there was the baffling insistence not only of deploying Daniel Sturridge – scorer of a fine goal against Malta but far too often dropping behind the front line – and failing to replace him with Manchester United’s incisive young Marcus Rashford until the 82nd minute.

His club mate Lingard managed to produce the only England strike of consequence late in the second half, bringing the home keeper Oblak the sole challenge he faced in the game.

In defence, oh for John Terry! Cahill without Terry beside him seems a vulnerable opposition, though Stones, if he can cut off his occasional dangerous taking of risks, should have a decent future.

Should Burnley’s young centre back, Michael Keane, who wasn’t given a debut, be potentially an answer? The coming match against a struggling Scotland at Wembley might well be a good moment in which to launch him.

In midfield, Dier was a disappointment and Jordan Henderson nothing like the commanding figure he had been against the limited Maltese.

Jamie Vardy remained on the bench when his sheer pace might have embarrassed the largely untroubled Slovenian defence late in the game. Dele Alli at least continues to show initiative and promise.

There was perhaps something of an argument for bringing Wayne Rooney on to steady the ship but why in place of Alli? The question of captaincy seems to be an irrelevance. Henderson clearly didn’t relish the role and was all too happy to give his arm band to Rooney.

Few other countries put such significance on the function. In Italy, the fashion remember was that the captaincy went automatically to the player who had the most caps.

Many years ago I remember a slightly comical situation, when the two most capped players for the Azzuri were the two Fiorentina full backs, Ardico Magnini and Sergio Cervato. How to resolve the dilemma? Simple enough; by giving the role to Magnini because he had one more cap than Cervato!

Of course there have been outstanding international skippers. Danny Blanchflower for Northern Ireland, Ferenc Puskas for Hungary, Franz Beckenbauer for Germany, Johan Cruyff for Holland. But they are surely the exceptions who prove the rule.

So England plod on to their ensuing two matches under Southgate. I don’t think he is the man, I would have liked to see the job go to Steve Bruce, but the three allegedly wise men at the FA ignored him and Aston Villa’s gain is England’s loss.

Another foreign manager? Names are being rumoured and it may be the only desperate choice. Just don’t ask me who.