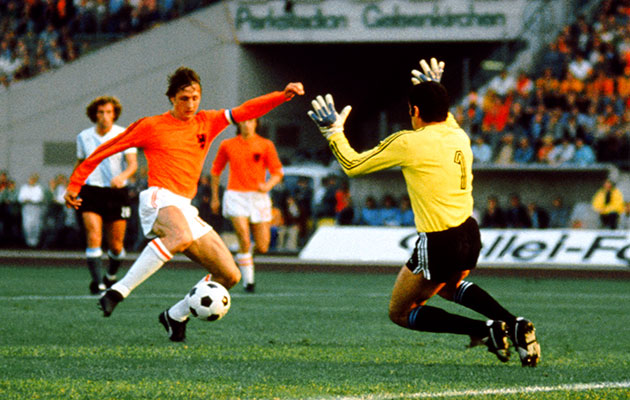 Johan Cruyff, one of the greatest footballers and then most innovative coaches of all time, has died of lung cancer in Barcelona, aged 68. He had been diagnosed last October.

Cruyff inspired Ajax Amsterdam to victory in three successive European Champions Cups in the early 1970s, led Holland to the 1974 World Cup Final and epitomised the revoluionary total football concept. In the pantheon of the game he stands right up among the likes of Pele, Alfredo Di Stefano, Ferenc Puskas and Diego Maradona as players whose genius lifted them on to a plane beyond all others.

Yet initially he owed his first steps to the persistence of his mother. She worked as a cleaner in the offices of Ajax and persuaded the club coaching staff to take Johan into their youth sections when he was still only 12.

The rest is history, and a virtually unbroken 25-year succession of trophies and awards on the highest plane as first player and then coach.

Cruyff made his first-team debut at 17, his goal-scoring international debut at 19 and went on to inspire Ajax and Holland through most of their golden 1970s.

Total football was a concept of the game first described as The Whirl in the early 1950s by the Austrian expert Willy Meisl. He saw the day when every player in a team would possess comparable technical and physical ability and would be able to interchange roles at will.

Cruyff was The Whirl in action. Nominally he played centre-forward. But his perception of the role of centre-forward was as orthodox as the squad No14 he wore on his back for most of his career with Ajax. He did turn up at the apex of the attack: but he was also to be found meandering through midfield and out on the wings, using his nimble, coltish pace to unhinge defences from a variety of angles and positions. 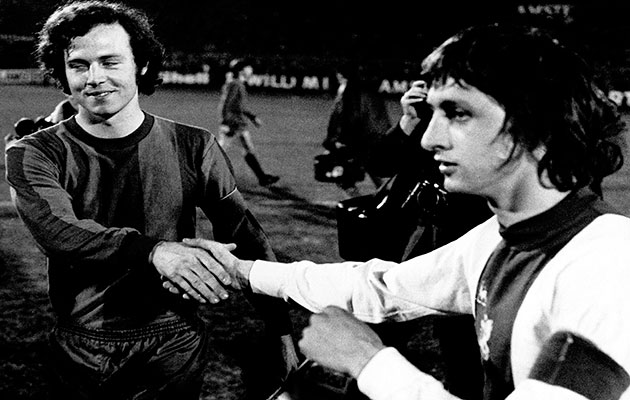 Single-handed, he not only pulled Internazionale of Italy apart in the 1972 European Cup final but scored both goals in Ajax’s 2-0 win. The next year, in Belgrade, he inspired one of the greatest 20-minute spells of football ever seen as Ajax overcame another strong Italian outfit, Juventus.

Already the vultures were gathering. Spain had reopened its borders to foreign players and Cruyff was an obvious target.

Eventually Barcelona won the transfer race – but after the close of the Spanish federation’s autumn deadline. However, such was the magnitude of the transfer that the federation bent their own regulations so that Cruyff could play immediately.

When Cruyff arrived in Barcelona, the Catalans were struggling down the table. By the season’s end they were champions, Cruyff’s triumphant progress having included a spectacular 5-0 victory away to deadly rivals Real Madrid.

Surprisingly, apart from that league title, Barcelona won little else, though Cruyff completed the first ever hat-trick of European Footballer of the Year awards.

It was at the end of his first season with Barcelona that Cruyff’s career reached its international zenith. At the 1974 World Cup finals Holland took their total football through round after round. No one could withstand them. 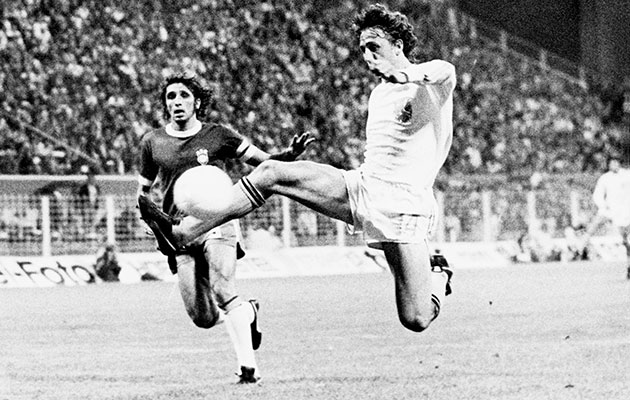 Johan Cruyff volleys home for Holland against Brazil at the 1974 World Cup.

Above all, no one could handle the mercurial Cruyff, who inspired victories over Uruguay and Bulgaria in the first round, then provided two goals to lead the way against Argentina in the second. The last group match – in effect the semi-final – was against Brazil: the old masters against the new. Cruyff scored Holland’s decisive second goal in a 2-0 victory which signalled a new era.

The final ended in defeat at the hands of West Germany and, though Holland reached the final again in 1978, by then Cruyff had retired from the national team and was about to head west.

First he joined the Los Angeles Aztecs in the NASL. He won the Most Valuable Player award that year, moved to the Washington Diplomats in 1980 and, late in 1981, returned to Holland to win the Championship twice more with Ajax and once, mischievously, with old rivals Feyenoord. 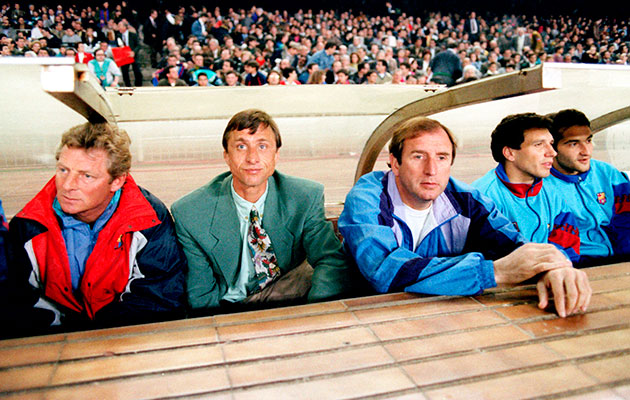 Cruyff is one of the few men to have combined a stellar playing career with one in management.

Not that it mattered.

He guided Ajax to the European Cup-winners’ Cup in 1987, and repeated the trick in 1989 after retracing his steps to Barcelona. Here he created the famous ‘Dream Team’ who secured the club’s first Champions Cup in 1992 – by 1-0 against Sampdoria at Wembley – as well as four consecutive league titles during his record seven years in charge.

3 European Footballer of the Year awards 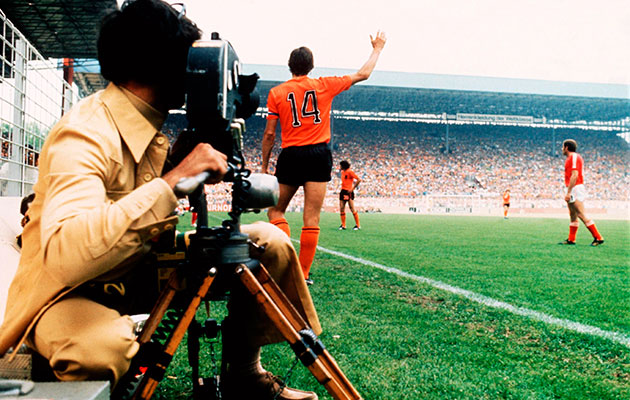 Johan Cruyff waits to return to the pitch during the 1974 World Cup.