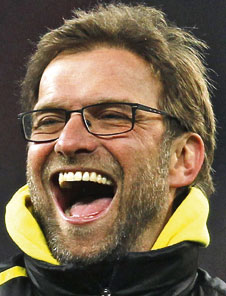 A long-serving utility player with Mainz from 1989 to 2001, he went on to spend seven years as the club’s coach, notably masterminding their promotion to the Bundesliga in 2004. Took over Borussia Dortmund in 2008 and won the Bundesliga title in 2011 and 2012, and the German Cup in 2012. Contracted until 2016.

IN HIS OWN WORDS

“The best number 10 for Dortmund is our pressing game. By winning the ball back as high up the field as possible, you’re within touching distance of going for goal”

“If I had to choose between my team taking part in a spectacular 4-4 draw and winning ugly 1-0, I’d go for the latter. The 1-0 is a thousand times better”

Although the term “Kloppism” is highly unlikely ever to find its way into any standard dictionary, no one could deny that the avant-garde footballing philosophy espoused by Borussia Dortmund boss Jurgen Klopp is not a living, breathing concept. It is a coherent and practical design for football, based on cut-price buys in the transfer market, a reliance on youth and a flamboyant, attacking playing style.

No wonder so many “Kloppo” converts are springing up here, there and everywhere at the moment. His methods are accountant-friendly, fun and exciting for fans and players alike. And as proved by the club’s recent triumphs – the 2011 Bundesliga title, a domestic league-and-cup double last term and the Champions League scalps of Real Madrid, Manchester City, Ajax, Shakhtar Donetsk and Malaga en route to the Champions League Final at Wembley – it delivers trophies.

At the heart of the mould-breaking Klopp creed is, of course, the way his young guns go about their business on the pitch. The aggressive high-pressing game, the ball-winning fury, the turbo-charged accelerations on regaining possession and the permanent need to overrun the opposition.

Passion and enthusiasm in constant motion, Dortmund are breathless and fearless. They play a game without snooze buttons. In short, theirs is the football of the future.

Many experts looked at Dortmund’s failure to impress in last season’s Champions League group phase – winning only one game and finishing last – and concluded that their death-or-glory approach was a recipe for disaster in Europe, that they were simply too naive to prosper at the highest level.

But how things have changed this term, with Klopp’s side making up the ground with cooler heads, increased levels of dynamism and physicality, and much more fluidity in the front four.

In the past, it was par for the course to categorise Klopp and his side as one-trick ponies; a team that struggles if their full-on blitz does not work out. But such an accusation no longer carries any weight. Both the 45-year-old Klopp and his charges have faced up to any shortcomings – and have been busy adding to their repertoire, especially in their counter-attacking work, tactical discipline and flexibility.

The late, late show which sealed victory against Malaga in the quarter-finals was built on an uncharacteristic barrage of long balls, while in the 1-1 away draw with Manchester City in the group phase, Klopp caused counterpart Roberto Mancini no end of problems by switching from his usual 4-2-3-1 formation to a slick 4-3-3.

The aim of the Dortmund CEO Hans-Joachim Watzke and general-manager Michael Zorc was never in doubt when they headhunted Klopp from second division Mainz in the summer of 2008. Looking to rebuild their struggling club after brushes with bankruptcy, Watzke and Zorc wanted their new coach to promote the twin values of youth and exciting play. With these two criteria in mind, they turned to Klopp, who five years previously had masterminded little Mainz’s first-ever promotion to the Bundesliga – and had then kept them there against the odds for the next three seasons.

During his interview for the Dortmund job, Klopp impressed upon his future employers that a capable young team could not be created overnight – and he was fortunate that his new bosses were prepared to give him all the time needed. Despite initial setbacks – throwing away European qualification in the final laps of the 2008-09 campaign and then going eight games without a win the following season – the Dortmund top brass kept their faith in Klopp, convinced they had hired the right man to take them back to the higher reaches in Europe.

And their patience was rewarded in the marvellous breakthrough season of 2010-11, with Klopp fine-tuning his full-throttle system for a fired-up squad of vastly improved players who had been instilled with a new sense of belief.

A side invariably reflects the personality of its coach, yet with Klopp it’s taken to a new level; Dortmund’s players revealing the same intensity and heart-on-the-sleeve emotion as the man who picks the team. The team known as “Die Schwarzgelben” shift into overdrive with the force of a whirlwind, and from time to time Klopp can be a technical area hurricane himself, prone to heatedly confronting any officials who have displeased him.

Star of the show

Bundesliga coach of the year in 2011 and 2012, Klopp might not like the fact, but there is little denying that he is very much the star of the Dortmund show. For all the world-class figures in his team, such as striker Robert Lewandowski and attacking maestro Marco Reus, the owner of the highest profile at the club is the charismatic man sporting a baseball cap and a five-day beard.

“My players know that I don’t stand above them,” declared the ever-modest Klopp in an interview with Kicker magazine earlier this season. “I”m behind them, supporting them in everything they do. When Bayern do well, they aren’t dubbed the Jupp Heynckes team; just Bayern. In Dortmund, everything is linked to my name. I don’t need it and it really annoys me.”

But this is the price of fame for a football revolutionary, king of Dortmund and, quite possibly, European champion.