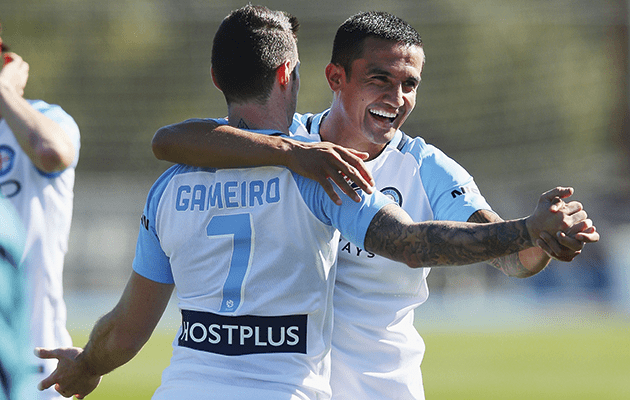 Ronny, Leo, Zizou, Becks…being known by one name – or a nickname – appears to be one of the measures of greatness for a footballer. And while he might not be in the same register globally as those listed above, mention “Timmy” in Australia and no one is in any doubt as to the player in question.

Tim Cahill has undoubtedly usurped Harry Kewell as the nation’s best-ever. If Kewell had the skill, Cahill has had the impact, goals and, crucially, the longevity.

And now, at the age of 36, he will finally grace the domestic A-League as it kicks off on October 7.

Cahill’s arrival at Melbourne City, by virtue of the new “marquee guest” rule may put some extra bums on seats, but the move hasn’t found favour with everyone.

Some rival clubs believe the financial assistance being provided by Football Federation Australia (FFA) is not only unnecessary – the club are hardly short of cash, being owned by the City Football Group – but also has the potential to skew the competition towards the big-city outfits, which are more likely to be able to entice superstars than, say, Central Coast Mariners.

However, FFA probably feels it has little choice. With a new broadcasting deal currently being negotiated, the domestic game needs to drive up crowds and TV ratings in order to create some competitive tension in the market place; tension that has barely existed in the 11 years of the nascent league.

Money has therefore been set aside to help clubs bring in big names to the competition, with the new rule created to guard against such clubs having to fill their regular marquee slots with players signed as much for their commercial appeal as their playing ability.

Cahill, of course, has the potential to fulfil both roles, although City’s regular marquee signing, Argentinian winger Nino Colazo, on loan from Boca Juniors, is tipped to make an exciting contribution. Cahill’s broader popularity was evident when he put a thousand on the gate at Brisbane Strikers when making his City debut in an FFA Cup tie. But what constitutes a player to be a “star” is already causing friction. Cross-town rivals Melbourne Victory tested the waters but were refused funding to help bring in ex-Italy striker Alessandro Diamanti. It’s a balancing act they must get right, not only for the sake of the TV deal, but also to keep the peace with clubs who want more autonomy in how the league is run.

Perhaps the clubs’ case would be helped by better leadership in their own boardrooms.

Brisbane Roar, for example, have endured another nightmare pre-season as the Bakrie family continue to mismanage one of the A-League’s most successful outfits.

Their appointment of Melbourne-based Daniel Cobb as managing director ended in tears and recriminations when unimpressed coaching staff effectively issued an ultimatum of “him or us.”

Cobb was removed, but supporters are tired of the Groundhog Day-type saga and want the Bakries out. However, FFA remains reluctant to move in on the licence, particularly when they have only just alleviated one significant financial burden by selling Newcastle Jets to Chinese businessman Martin Lee.

Lee’s tenure hit the rocks early when he replaced coach Scott Miller with Mark Jones just a few weeks before the start of the season.

Similarly, Mariners parted company with Tony Walmsley after they crashed out of the FFA Cup to State Federation side Green Gully. Ex-Socceroo Paul Okon has now taken charge.