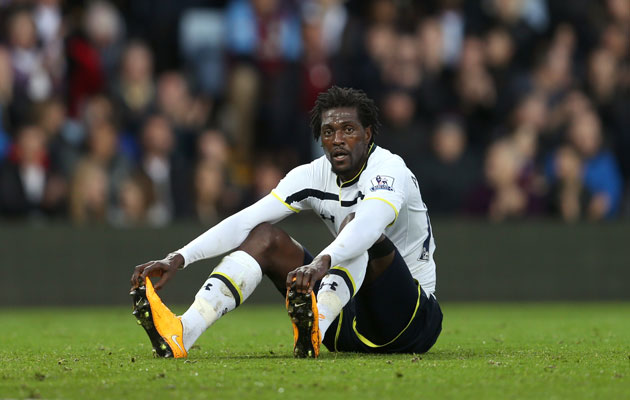 • Tottenham Hotspur striker Emmanuel Adebayor has only scored twice this season because his mother, Alice, has used witchcraft and put a curse on him.

• Former Liverpool winger Albert Riera plays his cards very close to his chest. The 32-year-old Spaniard denied claims that he was sacked by Serie A side Udinese for skipping a game against Chievo on November 23 to play in a poker tournament in Slovenia. According to reports, the former Spain international won £182,000 at the Perla di Nova Gorica casino in Italy.

• How the might have fallen…Yet another defeat for Borussia Dortmund – this time at Enitracht Frankfurt – leaves Jurgen Klopp’s side rooted to the foot of the Bundesliga.

• Two-time Brazilian champiosn Botafogo will play in the second tier nextb year for only the second time in 110 years after a 2-0 loss to Santos saw them relegated.

• LA Galaxy will meet New England Revolution in this year’s MLS Cup after beating Seattle Sounders on away goals after drawing 2-2 on aggregate.

• Real Madrid set a new club record of 16 consecutive wins after they defetated Malaga 2-1 on Saturday.

• Manchester City will not give up their Premier League title without a fight. Sunday’s 3-0 win at Southampton saw Manuel Pellegrini’s side leapfrog the Saints to go second in the table, six points behind early season pace-setters Chelsea.

• Ivorian champions, Sewe Sport secured a 2-1 win over Egypt’s, Al Ahly in the first leg of the 2014 CAF Confederation Cup final on Saturday in Abidjan. The second leg will be played next week.