Leicester City are an inspiration to us all

Romance after all, football’s romance, isn’t dead. Leicester City’s astonishing triumph in winning, what I from the first and still do call, The Greed is Good League, is a joyful event for football. A blessed reminder that even in these multi-million pounds days, money still isn’t everything.

Skilfully guided by Claudio Ranieri, rising from the ashes of Athens, supremely well served by a chief recruiter who has made one inspired signing after another, Leicester have defied probability and a clutch of immensely wealthier clubs by surging to the top of the Premiership and against all odds and probabilities, staying there.

Various of their refulgent players have been nominated as the star turn, the most important man. Some, including the footballers themselves, voted for the splendid Algerian Riyad Mahrez, picked up for a song by Leicester and moulded into the splendidly elusive and creative attackers that he is today.

Others would vote for N’Golo Kante, bought in the close season, a blend of strength, subtlety and elegance.

Yet I myself would still go along with the Football Writers’ Association in giving my vote to Jamie Vardy, hero of what you might call a Cinderella story, and a shining example to players who may have despaired that it is never too late to mature, shine and succeed beyond all expectations. 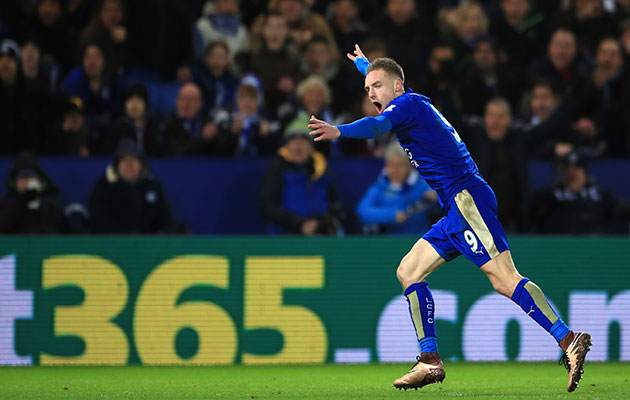 Leicester City’s Jamie Vardy wheels away after scoring a stunning goal against Liverpool.

At a time when boy footballers are recruited by clubs at the age of nine or even eight, the explosive emergence of Vardy has written a wholly different script. This is the player who was in boyhood rejected as too small by his local club Sheffield Wednesday, who made his painful part-time way through a clutch of no League clubs, obliged to train when he could while doing menial and exhausting day time jobs. Till at last he got to Fleetwood Town, taking them into the Football League with his profusion of goals; and Leicester had the good sense to sign him.

In no time at all he, with his dynamic pace and shrewd anticipation, his powerful finishing, has become one of the stars of the Premiership and an England player to boot, starting for the team out on the left flank where he was wasted, now properly picked in a central position where he can fully exploit his gifts.

The recruitment of such young boys may quite often result in rich rewards for the clubs that acquire them – Steven Gerrard and Jack Wilshere are obvious examples. But surely many are called and few are chosen; you wonder about the effect of rejection at so early an age might be on those boys who do not make the grade.

Vardy, though, shows us that, even in football, hope springs eternal. He may or may not be the exception that proves the rule but surely his dazzling success must act as an incentive to those players who might otherwise have thought they were left at the wayside.

Overcrowding at Hillsborough forces Liverpool fans to scramble for safety.

The belated Hillsborough trial has exposed a horrific cess-pit of incompetence, evasion and skulduggery on the part of the Sheffield police. Much of what emerged in its full putrefaction from the latest case was pretty well-known or strongly suspected in the long years since the disaster.

The confession by the hapless David Duckenfield that he had lied about giving an order to open the gates to the Lemmings Lane terrace was appalling, but we had known for a very long time that Duckenfield was hopelessly inexperienced and incompetent, that arguably the real blame lies with the superior, now himself named, who decreed that Duckenfield should be put in charge at the expense of the police officer who had managed to contain the crowd problem the semi-final before, between the same two clubs.

That these semi-finals should regularly be staged there at all, when there is so much evidence of past alarms, seems incredible. If the Sheffield Wednesday club themselves invite blame for the dangers of their ground, surely the Football Association are shockingly culpable for allowing those semi-finals to take place, an accident waiting to happen. The officer who was so mindlessly removed was made the fall guy for an adolescent prank by his underlings.