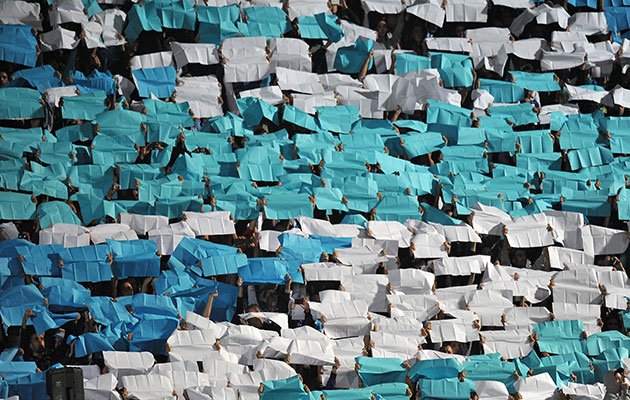 Marseille supporters have resorted to humour in response to their team’s terrible recent run of form.

With the club lying 14th in Ligue 1, the supporters turned on their own hapless players by playing the Benny Hill theme song during their match against Bordeaux on Sunday evening.

The supporters also displayed banners depicting goats – une chèvre is a term used to mock poor players in French football – in the Stade Vélodrome stands. If the supporters though the protest would shame the players into action, they were mistaken. Sunday’s 0-0 draw extended their winless run in the league to nine matches.

Marseille, who finished fourth last season and at one point challenged for the French title, are only six points above relegation having won just eight league games all season. They have not won a league game since 2 February and are without a home win in the league since September.

The team, currently coached by former Spanish international Michel, have, however, reached the French Cup semi-finals – where the play Sochaux next week.

Despite this appalling sequence of league results, the fans have still been turning up in large numbers to watch the underperforming team. Over 44,000 were present for the goalless draw against Bordeaux and the club has averaged an imnpressive 45,000 for the current campaign.