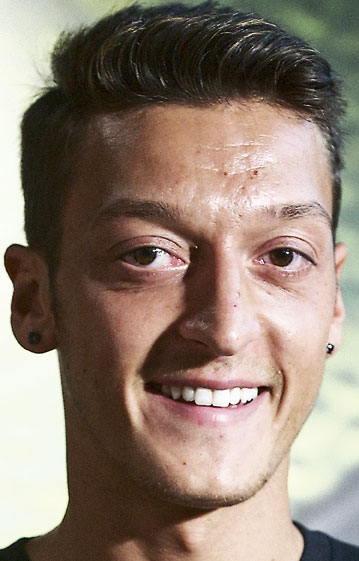 World Soccer: You’re younger than Juan Roman Riquelme and Wesley Sneijder. This means that you are the last major no10, right…?

Mesut Ozil: You could say it is as a playmaker that I can best express my talent. I started as a forward, but it was not my thing. I didn’t touch the ball enough, I liked to drop back to pick up the ball, so my coaches have come to understand that it was as a no10 that I was happiest. And there is probably another explanation: Zinedine Zidane. He has always fascinated me. His dribbling, the calmness when he had the ball at the feet…world class. I’ve never seen so much charisma on the field. Not to mention his goals and his roulette [the 360 degree turn]. That was also my move. A move that plays on instinct, on spontaneity. You can’t say, well, my next dribble, it will be a roulette.

When did you fall in love with his game?

I really discovered Zidane during the 1998 World Cup. From that point, when I played on the computer, I was Real or Zidane’s France team. And when I saw him make a move, I would go straight to YouTube and type in “Zinedine Zidane”.

I watched and then tried to reproduce his moves outside. Today, when I go back to Gelsenkirchen, and I pass the “monkey cage”, all those memories come flooding back. And when I see the little ones who are playing today, and I notice that some even wear my shirt, it makes me feel something.

Tell us about the “monkey cage”…

I grew up in Gelsenkirchen. I finished school at two o’clock, and every day until eight o’clock I played in a place called “the monkey cage”. It was about five metres by 10 metres, and we played six against six, so that you learn to keep the ball. We needed to think fast, be creative. In the “monkey cage”, the ball could never get out, so there was never a break, it was super-intensive in there. Even when you put it in wrong, the ball came back to you because it’s all enclosed, including the ceiling. I played with my friends against my brother and his friends. They were five years older than us. We played for stuff to eat or drink. We copped it, but I’ve never been afraid on a football field because

I was used to playing against bigger and heavier people. I saw that I was a little better than the others, but at the time I had no idea I was going to turn pro. In the cage there were guys who were Totti or Beckenbauer. I was Zidane.

No, but what I was doing in the cage, I unfortunately cannot always repeat on the pitch. “Real” football is different. My advantage was that I was small, I saw things that nobody saw. Even before receiving the ball, I knew exactly where my team-mates were. It’s still my biggest asset; even today it’s a completely instinctive thing. I’ve never worked at it, I’ve always had it. And it is valuable to the position I play because, unlike a winger, when I get the ball I’m not always in the direction of the game. On the contrary, I am often with my back to goal, so this extra time that I have is what allows me to find the solution more quickly.

Cesc Fabregas once said you were a “very chaotic player”, that you play in a “free” way…

I do not know about players at Barca, all I know is that in modern football you have to do the defensive job. I have freedom, certainly. I can go right, left, drop back, move forward. Today, the no10 is the attacker, but he cannot escape the collective and defensive work of the team. In the past, the playmaker was free, he did what he wanted. Now, football is more compact and everyone must participate in the recovery effort. Football has become much more tactical. When you watch football in the 1970s, tactically it was much less precise and complex. I’m not saying players were weaker, far from it, but now we work more as a team. Besides, this tactical dimension allows small teams to stand up to large teams, which was less the case 30 or 40 years ago.

Do you prefer any particular system?

Whether a 4-4-2 or 4-2-3-1, there is not much difference to my position; I’m still “in the axis”, no matter what. I still prefer to play with two wingers and a centre-forward because it also means I have two defensive players behind me, and then I think it is clearer in attack as there are two guys who cover the channels. With 4-4-2 I often feel the two strikers get in each other’s way. At Real, I was lucky to play with a guy like Cristiano Ronaldo, perhaps the best player in the world, a “cleaner” of spaces. Karim Benzema, too. These guys make your work easier. They know where they need to go, or not go, so that I can give them a good pass at the right tempo. In the national team, I feel a bit the same with [Marco] Reus.

When they get older, playmakers such as Andrea Pirlo drop deeper. Do you also see your future that way?

I do not know. It is about age, but also tactics. Bastian Schweinsteiger leads the game from further back but he is not old.

I cannot imagine anything else other than being an attacking playmaker. My role is to help my team-mates through my understanding of the game, to make assists, like Zidane. I prefer to play the pass that brings the goal rather than score myself.

People say you sometimes give the impression of being slow…

Well, maybe because, as I said, I often get the ball with my back to goal, so I have to go back, I can’t go forward immediately. I’m not in a position where I can move forward into space. Having to make the game, play one-twos, it does not give you the opportunity to accelerate.

You once said: “I am German, but my playing style is Turkish” What does that mean?

I have the Turkish side – through my family – which is a little relaxed, but also the German discipline. It’s a good mix, 50-50.