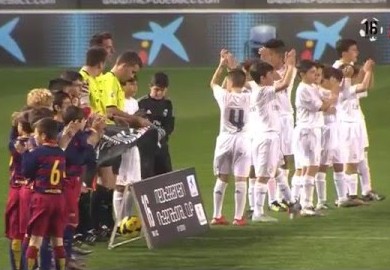 As the countdown to Saturday’s El Clasico fixtures begins, there was a taste of what’s to come last weekend when Barcelona met Real Madrid at Under-12 level in the “Mini-Clasico”.

Bizarrely, the match bore an uncanny resemblance to many of the senior fixtures contested by the two teams in recent seasons. Inevitably, given the current blanace of power, the game finished in a comfortable 2-0 win for Barcelona.

The game’s outstanding performer was the Barca No. 10, Toni Caravaca, who demonstrated Messi-like dribbling ability and dead-balls skills the older man would have been proud of.

Judging by the highlights the match was a one-side affair with Barcelona dominating the possession. The comparisons with the senior sides did not end there. There was a Luis Suarez-like moment of petulance from the Barcelona No. 9 who tugs the shirt of the referee after he was denied what he believed was a penalty. If he behaves like this at the age of 11, one wonders what he will be like ina few years time. Then, later on, Caravaca appears to wave an imaginary yellow card as he is hauled down for the free-kick that led to the second goal.

All that is missing from the typical clasico is a regulation red card for the Madrid captain and an outburst from the defeated side’s star player about his team-mates not being worthy of playing in the same team as him.