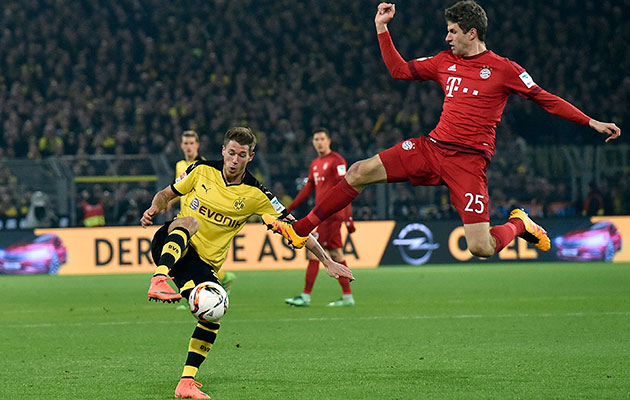 1. Dortmund and Bayern draw a blank in ‘Der Klassiker‘
Forget the lack of goals. The clash at the Westfalenstadion on Saturday of Germany’s two most dominant teams was Michelin-starred fare at fast-food prices.

A clash of the titans which had it all bar end-product. Spectacle, high-tempo intensity, technical quality, two coaching masterminds (Thomas Tuchel for the hosts and visiting guru, Pep Guardiola) and outstanding displays from both goalkeepers: Bayern’s Manuel Neuer and Dortmund’s Roman Bürki.

Bayern, who remain five points clear at the top of the table, must now feel the path is clear to their fourth consecutive title. However don’t expect Pep Guardiola to take his foot off the emotional gas any time soon. Always the perfectionist, Pep’s first act on the final whistle was to animatedly admonish young emergency centre-back Joshua Kimmich and while some would call it a dressing down, in truth, it was an act of love. Passion and anger mixed in with a dollop of paternal devotion.

“I just love the kid,” declared Pep afterwards. “He has all the talent, he can do it all and gives his all. He can defend against anyone in the world.”

2. Something about Schmidt
Distinctively different Mainz boss, Martin Schmidt, must be wondering what on earth to do for an encore after his side pulled off a seismic 2-1 victory at league pacesetters, Bayern Munich last week, only the latter’s second defeat of the current campaign and their first Bundesliga defeat at the Allianz Arena since Augsburg performed a smash and grab there in May 2015.

The 48-year-old Swiss used to get to his kicks as a motor racing driver, mountain climber or extreme skier. Yet who needs extreme sports when you can double down on the adrenaline rush by outsmarting Bayern on their patch ?

And nor was it a fluke, his five-man defence playing the game of their lives, everyone busy and alert and twice catching the all-stars napping with well-crafted counters. Not bad for an outfit who only has a player budget of 25 million euros (compared to Bayern’s 160 million).

All a case of mind over matter, says Schmidt: ” We only spoke about winning the game. We knew we wouldn’t have the possession. We had a plan and realised it would only work if everyone in the side knuckled down.”

3. Veh bites the dust at Eintracht
The announcement first thing on Sunday morning that Eintracht Frankfurt and coach, Armin Veh, had gone their separate ways would not have come as a surprise to anyone on the Bundesliga circuit.

Despite boasting the most expensive squad in the club’s history, Eintracht have been lost in a fog of mediocrity virtually all season and following a seven-match winless streak, finally slipped into the relegation zone at the weekend. In a previous spell in charge at the Waldstadion (2011-14), Veh did a magnificent job, steering The Eagles from second division to the Europa League. But since returning to the Hesse club last summer, found it impossible to conjure the old magic, managing just two top-flight wins in the last 15 and helpless to stop the fans furiously turning against him.

Veh’s assistant, Reiner Geyer, will serve as interim boss while the search goes on for a permanent appointment. Among those being linked to the vacancy are the Dutchman, Jos Luhukay, Markus Gisdol (formerly with Hoffenheim) and Kosta Runjaic (ex-Kaiserslautern).

4.  Phenomenal Pizarro
Teams fighting for survival need all the wise old heads they can muster and Werder Bremen certainly have such an influential leader of the pack in 37-year-old Peruvian striker, Claudio Pizarro, whose four goals in three days were instrumental to morale-boosting 4-1 canters in Leverkusen and at home to Hannover.

Now in his fourth spell at the Weserstadion, Pizarro’s hat-trick against the Leverkusener made him the oldest-ever scorer of a triple in Bundesliga history and at the weekend, celebrated his 100th goal for the Green-and-Whites, leaving him just one short of all-time club leading marksman, Marco Bode, who these days chairs the Bremen supervisory board.

Pizarro’s father recently hinted that his son hopes to end his career with a farewell tour at former club, Alianza Lima. Just one key question: does he make tracks for South America this year or next ?

5. Bye bye Breitenreiter?
Rumours continue to circulate in the Ruhr of Schalke’s apparent agenda to replace coach Andre Breitenreiter at the end of season with ex-Hertha Berlin and Gladbach boss, Lucien Favre.

The tabloid Bild claims that Schalke director of sport-elect, Christian Heidel – who is due to swop Mainz for Gelsenkirchen in the summer – is not at all convinced of Breitenreiter’s ability to manage at the highest level and already has held talks with Favre’s agent. Heidel himself categorically denies the report, but it remains to be seen whether it will be enough to destroy the palace revolution narrative.

Thanks to recent wins over Hamburg and Köln, the Royal Blues are back in the top-four. But strangely no one ever seems to credit Breitenreiter. Lose and the blame is his. Win and it’s in spite of him.