Nick Bidwell’s Notes from Germany: Bayern in freefall, Hamburg with one foot in the grave

1. Bayern. Out of touch, out of time.
Bayern Munich’s last-minute 2-1 defeat at lowly Freiburg certainly was a result rich in depressing statistical significance for the currently under-performing 2014-15 champions.

Not only was defeat in the Black Forest, the Bavarians’ third straight Bundesliga defeat – their first ‘three-and-out’ since Italian coach, Giovanni Trapattoni, began to lose the plot in the spring of 1998 – it also was a rare example of Bayern losing after taking the lead, the sort of carelessness they had not been guilty of in four long years.

With Bayern wrapping up the title three weeks ago, a sequence of dead-rubber reverses does not necessarily make for a full-blown Allianz-Arena crisis, but problems they undeniably have.

Star attacker Thomas Muller made no secret of his unhappiness on being substituted at Barcelona recently,  club elder statesmen, Philipp Lahm and Bastian Schweinsteiger publicly blamed the forwards for not taking enough of their goalscoring opportunities and coach Pep Guardiola has an awful lot of rethinking to do on the defensive front.

At times  this term, notably the Champions League semi-final loss to Barcelona and the 4-1 domestic championship loss to Wolfsburg, his side has been torn to shreds on the break and sooner or later Pep – whom Bayern chairman Karl Heinz Rummenigge continues to back unreservedly – will have to address the key failing in his system – the tendency of his back-line and midfield to play too high.

Nothing fuels the fires at Bayern like  European near-misses and major personnel changes are imminent, both expensive big-name acquisitions and a host of thirty-something departures (Schweinsteiger, Dante, Xabi Alonso). 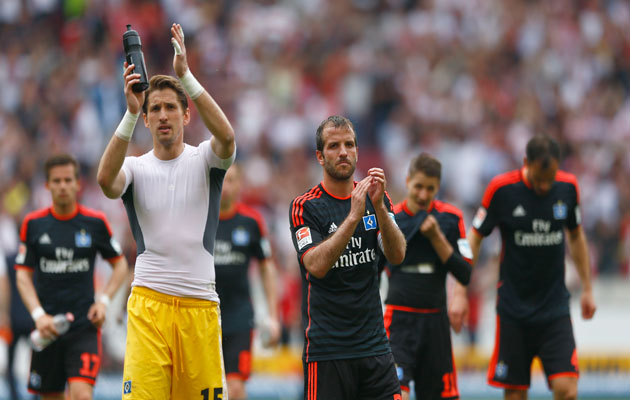 Disconsolate Hamburg players salute fans after their defeat to Stuttgart.

How the relegation-threatened northerners could do with some of the tactical chicanery and powers of motivation of their late, lamented former coach, Ernst Happel, the grim-faced Austrian who led them to
Champions’ Cup glory in 1983.

Back in the automatic demotion spots following a 2-1 defeat at fellow strugglers Stuttgart on Saturday, Hamburg are now just 90 minutes away from falling into the second division for the very first time and it says everything about their predicament that even a win at home to Schalke next week might not be sufficient to save them.

On the basis of their abject performance against Stuttgart, they already seem to have one foot in the grave.

Sloppy, timid, lacking in ideas and clearly ill-at-ease in coach Bruno Labbadia’s new 4-4-2 shape, they were second-best in all departments and could have lost by many more.

“We’ll be relying a little on the love of God, ” admits winger Zoltan Stieber. No kidding.

3. Let the relegation mental arithmetic begin.
Mathematically-wired brains and calculators will be the order of the day next weekend as one of the most complex and enthralling basement storylines in Bundesliga history reaches its climax.

With five clubs (Paderborn, Hamburg, Stuttgart, Hannover and Freiburg) hoping to avoid the two direct relegation berths and only three points covering them, the bottleneck is there for all to see and it may well take a tie-breaker – goal-difference, total goals and head-to-head results – to sift the grit from the precious stones.

For all concerned, a spot in the play-offs – the end of season clash of 16th in the Bundesliga and the third-placed club in the second tier – would right now be the equivalent of a gold medal and even the likes of Hertha Berlin could be dragged into that scenario should they lose on Saturday at Hoffenheim.

4. Ingolstadt to break new ground.
What an excellent domestic season it has been for the great southern state of Bavaria, Bayern Munich claiming their 25th Bundesliga title, FC Augsburg within a hair’s breadth of qualifying for next season’s Europa League and Ingolstadt celebrating their first-ever promotion to the top-flight.

Securing the second division crown with a 2-1 win at home to RB Leipzig, FCI were far and away the most consistent outfit in that league – only losing four games – and in Austrian coach, Ralph Hassenhüttl, had the most inspirational and astute of coaches.

Backed by the Audi car company and shrewdly led off the field by director of sport, the former German international defender, Thomas Linke, the club are decidedly well connected, but with average gates of only 9,500, will find it very tough indeed to achieve any sort of foothold in the elite.

5. FFC Frankfurt rule supreme in Europe.
Congratulations to Colin Bell, the Englishman who last week steered Frankfurt’s ladies to a 2-1 victory over Paris Saint-Germain in the final of the Champions League in Berlin.

Absolutely no relation to the brilliant former Manchester City and England midfielder of the 1960s and 70s, Bell, once an apprentice with Leicester City in his homeland, has spent the last 33 years earning a living in Deutschland as a player and coach and has to be one of the nicest guys in the game, thoughtful, communicative and charismatic.

During a spell in charge of Mainz’s reserves (2001-05), his immediate superior was first-team boss, Jürgen Klopp, and seems to have picked up the latter’s winning ways.

Paddy Agnew’s Notes from Italy: can Juventus claim the treble?