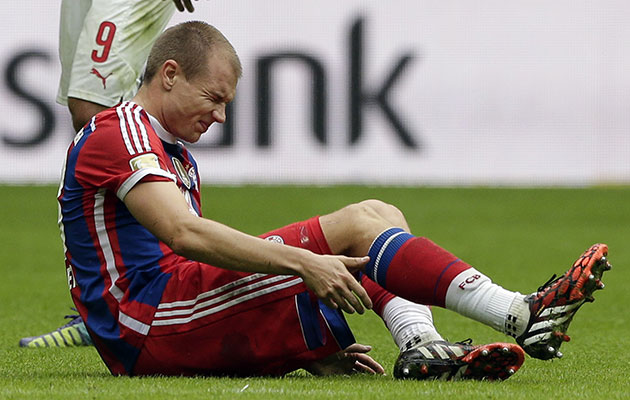 1. Badstuber. Bad to worse.
You would have to possess a heart of stone not to feel sorry for poor
Bayern Munich central defender, Holger Badstuber, who, in the latest in a seemingly never-ending loop of physical calamities, broke his ankle in a training ground incident on Saturday and is likely to be out for three months.

After 17 months on the sidelines in 2013 and 2014 with a complicated cruciate ligament injury and missing a further 300 days because of various severe thigh problems, the German international centre-back must have thought he had used up his quota of career bad luck. But now must grit his teeth and go again.

In a heartwarming show of solidarity, Bayern players took to the field for Sunday’s Bavarian derby at Augsburg wearing pro-Badstuber T-shirts and following their regulation 3-1 win promptly dedicated it, to their fallen comrade.

More central defensive headaches for Pep Guardiola. Both Badstuber and Jerome Boateng are unlikely to be operational before the end of the season, Javi Martinez is only due to return at the end of the month following a knee operation, while deadline day loan signing, Serdar Tasci, suffered a concussion in his very first Bayern training session.

One bulletin of good news: the return to full training of Moroccan Medhi Benatia after eight weeks on injured reserve.

2. The Nagelsmann era begins on positive note at Hoffenheim
“I was concentrating much more on our football and performance than all the hoopla in the media. On the whole, though, it was a great experience.”

New Hoffenheim coach, Julian Nagelsmann, at 28 the youngest-ever boss in the history of the Bundesliga, had every reason to be satisfied with the outcome of his first-ever pro technical area outing on Saturday – a hard-earned 1-1 draw at fellow strugglers, Bremen.

Forced to hop into the hot-seat six months ahead of schedule after previous incumbent, Huub Stevens, was compelled to quit with heart trouble, young Nagelmann certainly knows his own mind. Not only throwing two relatively untried teenagers in at the deep end (winger Philipp Ochs and midfielder Nadiem Amiri), but also switching from a four to a three-man back-line and removing big name veteran striker Kevin Kuranyi from the squad completely.

Never mind the fact that five of Nagelmann’s players are older than him. He has the confidence. He has the authority. And clearly knows what he’s doing in terms of his tactical approach and use of psychology.

3. In off the listening post
In the wake of their 2-1 home loss to Leverkusen at the weekend, Darmstadt are believed to have apologised to their Rhineland guests what over-zealous tabloid writers probably would describe as ‘team talk espionage’.

Leverkusen director of sport, Rudi Völler apparently caught an individual listening in at the door of the away changing room and angrily sent him packing.

“There was somebody in that vicinity, but he was only a volunteer member of our matchday organisation, ” explained a Darmstadt spokesman. “He’s not one of our first-team backroom guys or has any connection with them. It’s important for us to underline that this person could not and did not pick up any information.”

4. Hamburg highs and lows.
It’s been a weekend of wildly fluctuating emotions for the northerners. First the unrestricted joy of beating high-flying Gladbach 3-2 on Sunday at the Volksparkstadion, HSV’s first Bundesliga win in seven attempts.

Then the depressing breaking news from the accounts departments: total debts of some 90 million euros. After posting a record loss of 16.9 million last season, another minus is expected at the end of this term and it has to be a matter of concern that in the past 12 months they only have managed to reduce their red numbers by 1.3 million.

New investors are desperately needed. Naturally, the bigger the better.

5. Weinzierl and Leipzig: A Love Story?
One of Germany’s brightest young coaches, Augsburg’s Markus Weinzierl, is being widely-tipped to take over next summer at voraciously ambitious, RB Leipzig, who currently enjoy a six-point cushion at the top of the second division and no doubt will spend, spend, spend on star personnel if they reach the Bundesliga promised land.

RB technical director, Ralf Rangnick – who has been doubling up as club coach this season – reportedly only has eyes for Weinzierl and judging by the latter’s recent comments (“Leipzig is a fantastic project. They represent an entire region and want to showcase top-flight football in the East. “) the attraction is mutual.