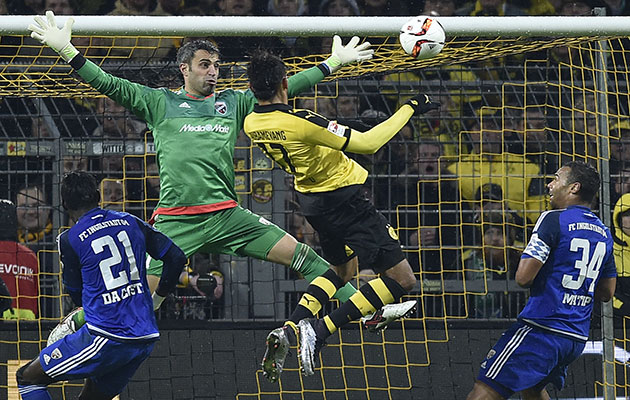 1. Instant replay back on the agenda
Anyone favouring extra lashings of video technology in pro football would have found Ingolstadt’s 2-0 loss in Dortmund on Saturday a heaven-sent stash of supporting evidence.

Their brave resistance punctured by two late goals from hometown sharpshooter, Pierre-Emerick Aubameyang, the away side justifiably felt they had suffered three flagrant miscarriages of officiating justice: the penalty they were denied in the first-half when new Paraguayan striker Dario Lezcano appeared to be pulled back by Mats Hummels; the latter’s own-goal which was chalked off for a rather innocuous Lezcano foul and a clearly offside Aubameyang heading in the deadlock-breaker 13 minutes from time.

In a post-match interview, referee Guido Winkmann, admitted the opening goal should not have stood (“It’s a fact it was offisde. It’s a fact is was a decisive moment in the game.”), while Dortmund skipper, Mats Hummels, ever the gentleman, declared he understood the opposition fury.

“When you concede an offside goal and then it’s show it on the big stadium screen, it’s two and three times as annoying,” he said. “I’m very much for video evidence. Only legitimate goals should count. With that, around ten to 15 per cent of current goals would not be allowed.”

2. Dortmund draw up their mid-year shopping list
Whether the ‘Schwarz-Gelben‘ manage to keep star striker Aubameyang beyond the current season or not – and CEO, Hans-Joachim Watzke was refusing to rule out such a sale on TV on Sunday – club general manager, Michael Zorc, is sure to be especially active in the summer.

After trying and failing to cut a January deal with Mainz for Turkish whizzkid number ten, Yunus Malli, the Dortmunder are convinced they will finally get their man in July, while Zorc is also believed to be hot on the heels of a pair of choice-cut young Spaniards: Atletico Madrid attacking midfielder, Oliver Torres and Osasuna holder, Mikel Merino.

3. Kramny orders Stuttgart off the high-wire
Two-one winners at home to Hamburg at the weekend and now unbeaten in five Bundesliga games, Stuttgart undeniably made the right decision in late November when ditching coach, Alexander Zorniger, and promoting club reserve team boss, Jürgen Kramny, to fill the gap.

Under the latter, the Swabians have slowly but surely clambered out of the relegation zone and this marked improvement is entirely down to a complete change of tack, Kramny substituting his predecessor’s frenetic high pressing game for a far more conservative counter attacking style.

Though Zorniger’s intensely proactive system could, at times, be a spectacular fireworks display, it had one fatal flaw – just one blown individual assignment leading to the whole house of cards collapsing.

Life at the wrong end of the table demands substance and defensive vigilance. And that’s exactly what Kramny has instilled at the Mercedes-Benz Arena.

4 Bayern’s defensive woes continue
Just a week after colossus centre-back, Jerome Boateng, was ruled out for some three months with a damaged adductor muscle, Bayern’s options in that department have been further depleted by a knee injury to Basque ace, Javi Martinez.

Forced to miss Sunday’s 2-0 win at the Allianz-Arena over lowly Hoffenheim, the Spanish international is thought to be suffering with a slightly detached cartliage in his left-knee and requiring a short clean-up operation, is likely to be out for two or three weeks.

Despite Bayern director of sport, Matthias Sammer, describing the injury as “no big story”, Martinez is very much in danger of missing the first-leg of the Champions League Round of 16 tie against Juventus.

As usual at Schalke, an organisation infamous for its volatility, all the talk is of behind-the-scenes manoeuvring and discontent. Rumours of club management losing faith in coach, Andre Breitenreiter, rifts in the dressing room and more than the odd player turning rogue.

Sky Deutschland, in particular, have gone big on the so-called scoop and so angry was Breitenreiter with the station’s coverage that he refused to be interviewed by them in Darmstadt.