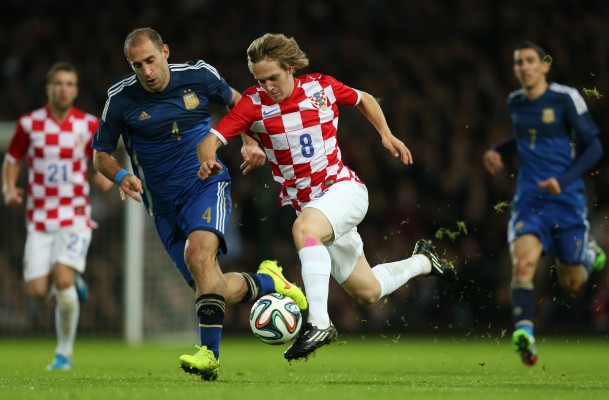 Even the best-laid plans.
With Bayer Leverkusen central defensive organiser, Omer Toprak likely to be out until the end of the year after rupturing tendons in his left-hamstring during a pre-season friendly, the Rhineland outfit are desperate to plug the hole and after trying and failing to bring in Bayern Munich’s Brazilian stopper, Dante – who seems quite content with a second banana role at the Allianz-Arena – ‘Werkself’ director of sport, Rudi Voller will have to look elsewhere for emergency cover, maybe in the direction of Wolfsburg back-up, Timm Klose or Tobias Strobl at Hoffenheim.

Hamburg pan for Barca goldust.
Hamburg recruitment chief, Peter Knabel has admitted that the northerners are keen on putting together a loan deal for Barcelona Croat boy wonder, Alen Halilovic. Since arriving at the Camp Nou last summer, the 19-year-old attacking midfielder has for the most part featured for Barca B, but Spanish second or third tier football can only take  him so far and now the search is on to find the youngster the best possible top-flight finishing school. Also reported to have sent in their foster parent application forms are Premier League outfits, West Ham and Everton and Celta Vigo and Sporting Gijon in La Liga.

We call the shots at this club, Herr Schulz.
Hertha Berlin appear to be open to offers for highly-rated German Under 21 left-back, Nico Schulz after talks about an extension to his current contract – which only has ten months left – ended in complete disagreement and furious recriminations. In order to cash in on the young Berliner, Hertha have no other option but to sell him straight away and the word is that his agent Roger Wittmann has plenty of Bundesliga and overseas offers on file.

The hunt for the ‘new De Bruyne’ is on.
Sensibly assuming that Kevin De Bruyne’s days at Wolfsburg are numbered, the VW-backed club think they have found an outstanding creative and goalscoring successor in Twente and Dutch Under 21 attacking midfielder, Hakim Ziyech. The imaginative left-footed playmaker and free-kick specialist was outstanding form in the Eredivisie last season, netting 13 times and providing 16 assists and like De Bruyne, is extremely dangerous when driving forward at pace from deep areas. The youngster’s price is rising fast and time is of the essence.

A Ruhr exchange for ‘Kuba’ ?
Polish sports paper, Przeglad Sportowy, have received a whisper that one of their country’s best-known footballing exports, Dortmund winger, Jakub Blaszczykowski, is an object of desire for Ruhr rivals, Schalke. On the ‘Schwarz-Gelben’ pay-roll for the last seven years, ‘Kuba”s total commitment and electrifying right-flank style made him one of the key components of the Jurgen Klopp era, but new coach Thomas Tuchel clearly does not have the same reverence for the Polish turbo as his predecessor.