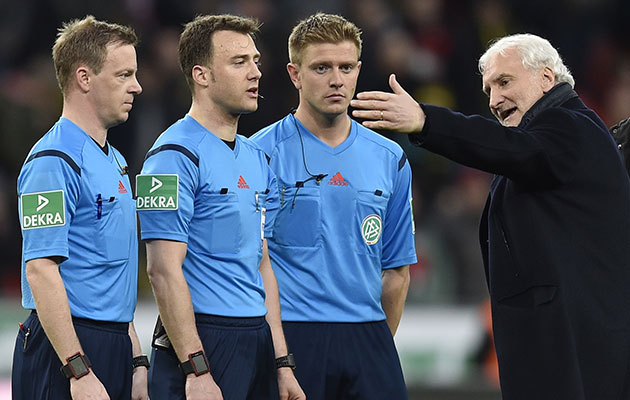 1. Schmidt ill-advisedly stands his ground
Leverkusen coach, Roger Schmidt, can expect a severe punishment from
German football’s disciplinary denizens after refusing to head for the stands on being sent off during his side’s 1-0 home defeat to Dortmund on Sunday.

Adamant that Pierre-Emerick Aubameyang’s 65th minute match-winning strike should not have stood, that a swiftly-excecuted free-kick at the start of the move had not been taken from the right spot, Schmidt was so focused on agressively making his case that he barely seemed to notice when the red card was brandished and in a scene of utter chaos, match referee, Felix Zwayer, had little option but to go by the book, sending both teams to the dressing room.

Ten minutes later, the two camps – minus Schmidt – re-emerged to complete the game, though not without another controversial twist, Zwayer turning down a Leverkusen penalty appeal when Dortmund defender Sokratis appeared to handle in the box. Much calmer in his post-match press conference, Schmidt was to quick issue a mea culpa.

“Maybe I was a bit stubborn,” he said. “I have done damage to my team. I’m sorry. I am a role model and have not shown myself in the best possible light. But in hectic and emotional moments, you can go over the top. My team fell behind to an irregular goal. I’m simply asking for justice for my team. ”

2. The pressure mounts on Veh
Under fire Eintracht Frankfurt coach, Armin Veh, will not be sleeping any easier in the wake of Friday night’s scrappy 0-0 draw at home to Hamburg.

With just one win in five Bundesliga games this year and many of his
players either indifferent to or paralysed by the spectre of relegation, Eintracht are not a pretty sight and according to some in the local media, Veh only has until Easter to turn it around and save his job.

Chairman of the board, Heribert Bruchhagen and director of sport, Bruno Hübner, have a vital decision to make. Stick or twist. Plan A: keep their fingers crossed that Veh can find a solution to the team’s defensive failings, poor discipline and unimaginative attacking play. Or go for the so-called psychological boost of a new ‘Trainer’.

Not that a last-gasp coaching transplant guarantees survival. Eintracht, themselves, tried the ploy late in 2010-11, when ditching Michael Skibbe for supposed big-hitter, Christoph Daum. The net result? Disaster. Seven games without a win and demoted anyway. 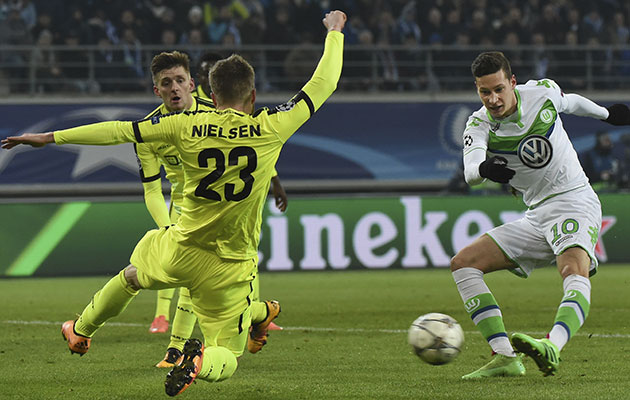 Julian Draxler produced a rare man of the match performance against Gent.

Could his Man of the Match performance in Wolfsburg’s 3-2 Champions League victory in Gent in midweek be the moment when big money summer acquisition Julian Draxler, finally came of age as the attacking brains of the VW club.

Lured away from Schalke last summer in a 36 million euro deal, the young German international spent his first six months in the ‘Autostadt‘ brutally grinding the gears, only infrequently in synch with his teammates and decidedly lacking in consistency and confidence. But what an impressive figure the attacking midfielder cut in Gent, scoring a fine brace and proving totally unstoppable all night long.

While Draxler admits, that he has found himself “submerged” in certain games this season, it’s also fair to say that circumstances have conspired against him.

Since finishing domestic runners-up last term, Wolfsburg have collectively and individually stagnated and nor has he been helped by coach Dieter Hecking’s uncertainty as to his best position, sometimes using him as a number ten – the role which Kevin De Bruyne interpreted so magnificently in 2014-15 – sometimes on the left.

Veteran Bundesliga coach, Felix Magath, who used to have Draxler under his wing at Schalke, recently declared that the latter did not have the resolve or will-to-win to be De Bruyne’s successor. Did Magath speak too soon ?

4. Mo’ headlines, mo’ plaudits, mo’ admirers
The scorer of the only goal of the game as Mönchengladbach saw off Köln in a hectic, full-blooded Rhine derby, rising midfield star, Mo Dahoud is nigh impossible to ignore right now.

A TNT combination of dynamism, desire, classy technique and tactical intelligence, the German U20 international of Syrian Kurd lineage has been enjoying an extraordinarily positive rookie season in the Bundesliga and if the journalists at Bild are correct, soon could be on the move to higher ground at Dortmund.

The Ruhr outfit will have to dig deep, though. His current deal with Gladbach, which still has over two years to run, contains no release clause.

5. Müller makes his Goal of the Season pitch
More important than ever to Bayern Munich’s well-being, irrepressible attacker, Thomas Müller normally is a man for the simple, unvarnished finish, netting the vast majority of his goals from close quarters.

But on Saturday, in his side’s 3-1 victory against Darmstadt, he had something far more spectacular to contribute to the score-sheet: a back-to-goal chest control followed by the most acrobatic of overhead kicks. Outstanding improvisation. Sheer class.

“Somehow I had to manoeuvre the ball in the direction of the goal,” smiled Muller, whose two goals at the weekend took him to 17 in the Bundesliga this term.

“It wasn’t 100 per cent planned but worked out well. If, once in a while, I score a nice goal, I don’t want to make too much of it. When I put away an ugly one, its worth just as much.”