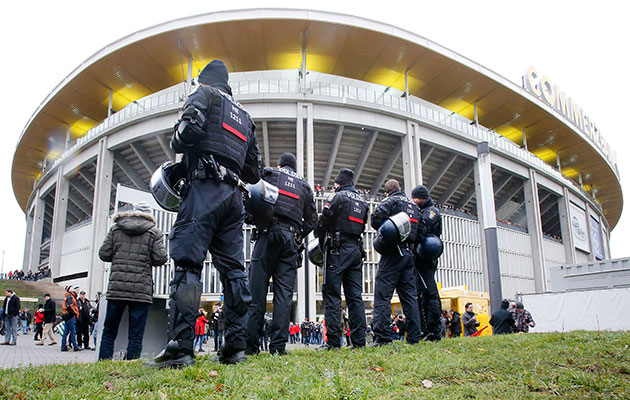 1. Welcome to the stadia ring of steel
For the first set of Bundesliga fixtures since the terrorist attacks in Paris and the cancellation of the Germany-Holland friendly in Hannover due to a ‘concrete’ bomb threat, tighter protective safeguards inevitably were the order of the day at the nine venues involved.

In Hamburg, for example, where the number of security staff was increased from 450 to 600, everyone attending the game against Dortmund had to have at least one full body search, all bags were meticulously searched, firecrackers and other pyrotechnical devices were absolutely ‘verboten‘ (forbidden) and sniffer dogs were let loose in the ground on two separate occasions to look for explosives.

Elsewhere it was the same high-alert story. The entrance controls at Stuttgart were so tight and painstaking that the kick-off had to be delayed by 15 minutes, while at Wolfsburg, there was a far greater police presence and even the cars in the VW Arena’s VIP car park were subject to examination. Ironic, then, that the football weekend was anything but free of violence.

Prior to Schalke’s 3-1 home defeat to Bayern Munich, almost 200 fans of the away team and Ruhr rivals Bochum were arrested after a ferocious attack on ticket office at the Veltins Arena; Bremen supporters ran amok in train carriages en route to Wolfsburg and a group of Hannover followers went on the rampage during their trip to Gladbach.

2. Down with the works teams
Germany’s very own punk rock club, second division St Pauli, certainly have whipped up a storm with their call for four Bundesliga corporate or sole-owner outfits (Wolfsburg, Leverkusen, Hoffenheim and Hannover) to be excluded from the fruits of the TV deal.

The St Pauli argument is that since none of the four comply with the ’50+1′ ownership rule – whereby the club membership has to hold the controlling stake – they do not deserve a piece of the TV revenue pie (this season 850 million euros are to be shared out among the country’s 36 pro clubs).

This provocative proposal will be discussed and voted on at a League meeting in Frankfurt next month and if it was passed – and it’s long shot – it would signal the end of the concept of centralised marketing of the TV rights, a development which would especially have the all-powerful Bayern Munich licking its lips in anticipation of lucrative individual deal.

3. Snowstorms and a snooze-fest in the capital city
Played in a heavy snowstorm at the Olympiastadion on Sunday, Hertha Berlin’s 1-0 home win over bottom club Hoffenheim was the sort of fixture only masochists would have enjoyed.

In Siberian conditions, the two sides made Bundesliga history by not recording a single shot on goal and thoroughly in keeping with the dire spectacle, the defining moment of the game was an instance of self-harm, Hoffenheim midfielder, Eugen Polanski heading into his own net from a Hertha free-kick.

Following the wintery non-event, Hoffenheim coach, Huub Stevens, was caught on camera holding his head in his hands. He wasn’t the only one.

4. Hamburg continue to haunt Dortmund
Given Hamburg’s poor home form in 2015-16 – winning only one of their first five league games – and the free-wheeling attacking brilliance shown by the Dortmunder this term, the pre-match signs all pointed to a regulation away win.

So what a let-down it was for fans of the ‘Schwarz-Gelben’ to see their second-placed side slump to a 3-1 defeat at the Volksparkstadion on Friday night, a game they virtually handed to their opponents with a string of crass defensive errors, not least Mats Hummels bizarre headed own-goal.

Dortmund must be sick of the sight of HSV, who in their last four meetings with the Ruhr men, have picked up no fewer than ten points.

5. Stuttgart fire Zorniger
The relegation-threatened Swabians 4-0 home defeat at the hands of Augsburg at the weekend proved to be the final nail in the coffin of under-fire head coach, Alexander Zorniger, who only arrived at the Mercedes Benz Arena last summer, but simply did not deliver enough positive results, suffering nine defeats out of 13.

He insisted on fluid attacking football. He wanted to take risks. But in the final analysis, was undermined by the many gaping holes in his side: the slipshod back-line, the wastefulness in front of goal, the lack of physical presence and personal ill-discipline.