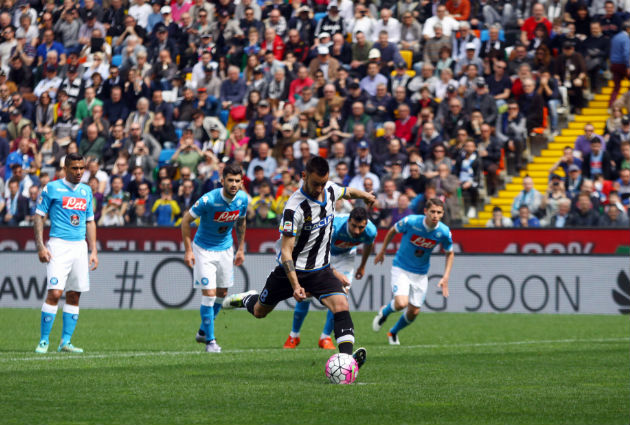 Has the Napoli dream of a third league title finally come to an abrupt halt?

Are champions Juventus now home and dried, on the road to a remarkable fifth consecutive Serie A title? At the end of a dramatic weekend which first saw Juventus win as expected against Empoli but which then registered Napoli’s unexpected 3-1 defeat away to Udinese, those are the questions being asked up and down Italy.

With seven games to play and a six-point lead over second placed Napoli, it now seems only realistic to conclude that this contest is all over bar the shouting. On top of that, Napoli will have to play four of those seven games without their 30-goal talisman, Argentine Gonzalo Higuain, sent off in dramatic circumstances in the 75th minute of Sunday’s loss. 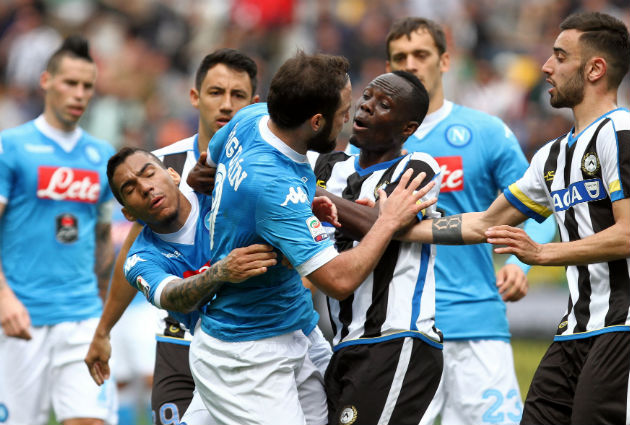 In the end, it is tempting to conclude that, more than anything else, it was the infernal rhythm and pressure applied by born-again Juventus that broke Napoli.   Following their unusual poor seasonal start, Juventus have done nothing wrong, winning 20 and drawing one of 21 league games since late October. Put another way, they have never given Napoli even the hint of a let-up.

Worse still for Napoli, on several occasions including this weekend, they have taken the field knowing that Juventus had already played and won. This time, the pressure of hanging onto those famous coat tails was just too much.

Looking a bit predictable not to mention vulnerable (especially down their left flank), Napoli conceded two penalties (the first one scored, the second saved) to relegation threatened Udinese in the first half hour alone. When Higuain, (who else?) popped up with a fierce drive from just outside the box to score a 25th-minute equaliser, it created the momentary illusion that Napoli might get back into the driving seat.

Higuain’s 30th goal of the season was born out of pure frustration but it still might have fired up Napoli. Instead, Udinese were almost immediately awarded their second penalty of the day. It was at this point that substitute Napoli goalkeeper, Brazilian Gabriel, playing instead of the injured Reina, then proved himself both hero and villain of the piece.

Gabriel had gone close to saving the first penalty, taken by Portuguese midfielder Bruno Fernandes. He did even better with the second spot kick, also taken by Fernandes, making a good save. Then, as the game reached the 45th minute, Gabriel spoiled his own good work.

Failing to control a back pass, he inadvertantly knocked the ball to the feet of Udinese striker, Colombian Duvan Zapata. As Gabriel rushed out to try and win the ball back off the Colombian, Zapato knocked in a cross which was spectacularly put away with an overhead kick by Fernandes. Instead of going in at halftime on a 1-1 scoreline, Napoli were suddenly and in this case stupidly behind again.

Twelve minutes into the second half and the game was over, as Udinese’s French striker Cyril Thereau made the most of yet another incursion down the Napoli left by Swiss full back Silvan Widmer to make it 3-1. All that remained at this point was for Higuain to compound a miserable day by totally losing his cool when he picked up his second yellow card.

His frustration was understandable. He picked up the first yellow card for protesting a (probably wrong) offside call whilst he picked up the second card after a happy little exchange of kicks with Udinese’s Brazilian Felipe, an exchange in which he was as much victim as offender. What was not justifiable was the extent to which the Argentinian then lost his cool, at one point even appearing to physically threaten referee Massimiliano Irrati. Hence, the subsequent four day ban and hence the conclusion that it is “Arrivederci Scudetto” for Napoli.

Worse too is the thought that, following Roma’s 4-1 defeat of Lazio in the Rome derby, Napoli may now struggle to hold onto second place. In winning nine of their last 10 games, Roma have proved without any doubt that they are a much improved side in the wake of the January replacement of Frenchman Rudi Garcia by former Zenit St Petersburg coach Luciano Spalletti. 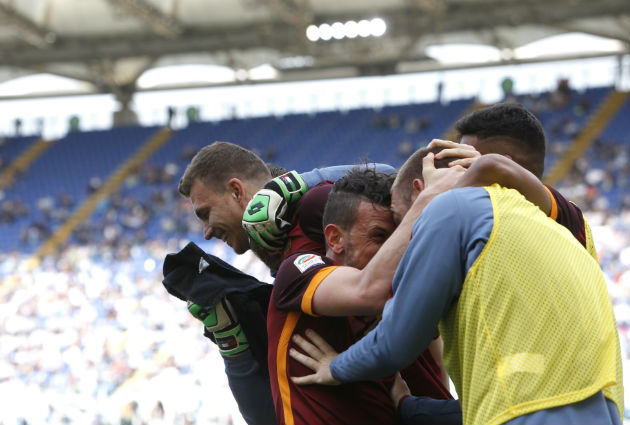 Edin Dzeko, left, celebrates with teammates after scoring during match between Lazio and Roma

The story of the derby is soon told. Roma were 2-0 up, thanks to goals from Stephan El Shaarawy and Bosnian Edin Dzeko, before Lazio began to play. Galvanised by the introduction of German ace Miroslav Klose and of Senegal’s Keita Balde, Lazio had a good 20 minutes in the second half, scoring through Parolo, hitting a post and being denied by at least one brilliant save from Roma keeper, Pole Wojciech Szczesny.

An 83rd-minute, third Roma goal from Alessandro Florenzi, resulting from a corner cheaply conceded by a poor Lazio defence, finished off the contest. Argentinian Diego Perrotti then crowned an outstanding game with a fine goal, three minutes from time.

In the end, whilst the final scoreline was a trifle flattering to Roma, there was no denying the clear superiority of Spalletti’s team. Now eighth on 42 points, the derby defeat culminates a disappointing season which saw Lazio flop not only in the Champions League preliminary round (eliminated by Leverkusen) but also in the last 16 of the Europa League (eliminated by Sparta Prague).

Derby defeats always hurt more than other defeats and this was reflected in the decision of Lazio owner Claudio Lotito to sack his coach Stefano Pioli, just three hours after the game. Pioli will be replaced by the Lazio youth team coach, former Lazio striker, Simone Inzaghi, younger brother of ex-Milan player and coach, Pippo Inzaghi. He has been appointed to guide the side from here to the end of the season, with an extension to the job not ruled out – results depending, of course.

Who knows if that decision had been “inspired” by the fact that Lotito had been rudely interrupted during dinner in a central Rome restaurant by outraged Lazio fans, keen to express their anger. In the end, before anything untoward could happen, the situation was brought under control by Lotito’s bodyguards.

Other Lazio fans expressed their disappointment too, travelling out of Rome to Lazio’s Formello training ground to register their protest. When they got there, the fans found no players, only police waiting for them. The fans consoled themselves by scuffling with the police, following which three fans were arrested.

It has to be said, too, that both Lazio and Roma fans were negative protagonists during the game itself, in that only 30,000 attended the half-empty Olimpico. Both Lazio and Roma “ultras” continue to boycott the stadium by way of an absurd protest against crowd barriers introduced into their “curve” (terraces) this season by Rome’s senior policeman, Franco Gabrielli.

Final thought – prior to the Rome derby, there had been a deal of speculation as whether Spalletti might concede a walk-on part to local hero, 39-year-old Francesco Totti, sitting on the bench at what was presumably his last derby. As it turned out, Spalletti made no concession to sentiment, leaving Totti on the bench. The future of the Roma talisman remains unclear but all the logic of the last few months would suggest that his top-level career, at least with Roma, is over.