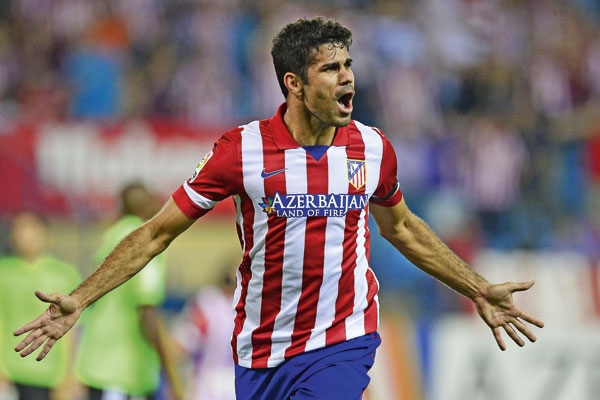 It’s a fools’ game predicting who will feature in the 2014 World Cup Final, but few would bet against the hosts Brazil facing the holders Spain; the most successful team in World Cup history against the team that has dominated international football since 2008.

For one man, such a Final would mean loyalties being split right down the middle. Atletico Madrid’s Diego Costa made his debut for Brazil in March, in friendlies against Italy and Russia, but was overlooked for the Confederations Cup in June, where a competitive game would have tied his international future to the country of his birth.

However, Spain coach Vicente Del Bosque saw an opportunity to pick the 25-year-old for his adopted homeland and called him up for the World Cup qualifiers in October – until the Spanish federation (RFEF) encountered resistance from their Brazilian counterparts and the paperwork
was not released on time.

Nevertheless, Del Bosque was keen on Costa making the switch, saying: “He has all the necessary criteria. He has Spanish nationality, he has been here since he was 18, he was formed here [as a footballer], he has not played official games for Brazil.

“Plenty of foreign players have played for Spain. Some see it almost as an attack [on the nation], but he is integrated here. The thing is, no one has talked to him. And if we call him up we are almost, almost obliged to take him to the World Cup. We have to be absolutely sure. It’s still in the air.”

Despite the confusion, the RFEF announced that Costa had signed a document declaring his intention to
play for Spain. An angry Brazil coach Luiz Felipe Scolari responded by saying the player had been “automatically deselected” from playing for Brazil.

“He is turning his back on the dream of millions to represent the five-time world champions at the World Cup in Brazil,” Scolari lamented.

Costa was subsequently named in the squad for Spain’s friendlies against Equatorial Guinea and South Africa in November, but injury prevented him joining up. His next chance to make his Spain debut will be a friendly against Italy in March.

Costa has divided opinion in Spanish football since his arrival in 2007 via Portugal. His aggressive playing style led one pundit to describe him as having “arms like a Swiss Army knife” and his aggression has not always been channelled in the right direction. Last season he was sent off for butting David Limbersky of Viktoria Plzen in the Europa League and was banned for four games by UEFA. But Del Bosque has identified a need for a physical presence in attack and feels Costa could be the man to provide it.

His form this season has been exceptional. In October he scored the goal against Real Madrid that took Atletico to joint top of the table, level with Barcelona. By the start of December, he had 15 league goals, second only to Cristiano Ronaldo in the ESM Golden Shoe rankings, as Atletico enjoyed the best start in their history.

It was probably more than just coincidence that this summer was the first time in his journeyman career (Braga, Celta Vigo, Albacete, Valladolid, Rayo Vallecano) that he did not switch clubs. He rejected a move to Liverpool
in favour of staying in Madrid and stepping up to fill the shoes of Radamel Falcao, who was sold to Monaco in the close season.

At Atletico, he has followed in an illustrious line of strikers: Falcao, Diego Forlan, Sergio Aguero, Fernando Torres and Christian Vieri, to name just five. And now his form has earned him the chance to play at the World Cup, though in the colours of his adopted Spain rather than his native Brazil.