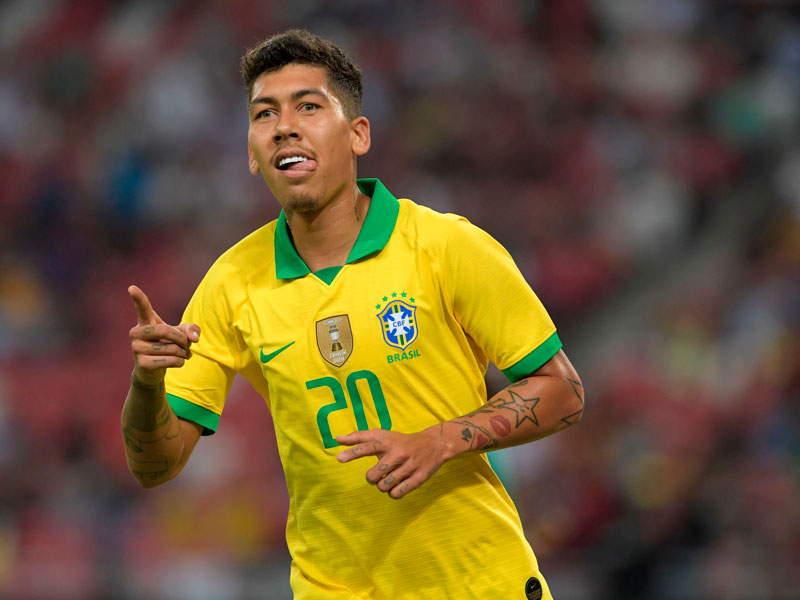 The battle to be Brazil’s centre forward is raging on both sides of the Atlantic.

The long term problem appeared to have been solved in late 2016 when new coach Tite threw in an untried teenager by the name of Gabriel Jesus – who responded in fine style. He scored seven goals in nine games, turning a tricky World Cup qualification campaign into a parade, and grabbed the only goal in a Russia 2018 warm up away to Germany.

But then came the World Cup.

After the quarter final elimination by Belgium, Tite dwelt extensively on where he had gone wrong. If he could turn back the hands of time, he would have replaced Gabriel Jesus, who had a disappointing time. The Manchester City striker was left out of the next squad. He has got back in – but never again as a centre forward. He has been used wide, according to Tite the position he favours.

And so the baton passed to Roberto Firmino. But there was a problem. Tite made another change. Concluding that his side had been too open against Belgium, he changed the focus of his full backs. Rather than auxiliary wingers, pushing repeatedly up the flanks, he wanted them to stay deeper, building from the back and remaining in a compact defensive unit. In other words, he wanted Manchester City full backs, rather than Liverpool ones.

There is an obvious problem here for Firmino. He thrives in a Liverpool side where the attacking full backs allow the front three to stay close together. Essentially a combination player, Firmino can slide his passes through for Salah and Mane, and choose his moment to burst into the box. Brazil, though, were using him in a totally different way. With the wide strikers hugging the touchline he was left isolated – and he often found his preferred space filled by playmaker Phillippe Coutinho.

True, Brazil won the Copa America. But they were at home, did not meet the two sides who could have really tested them (Colombia and Uruguay) and were held goalless by Venezuela and Paraguay. In the post Copa friendlies, without home advantage, things got far worse. The side went five games without a win, including 1-0 defeats to Peru and Argentina. Only in the last game, a 3-0 win over South Korea, did they look more convincing – with Firmino coming off the bench to feature in an attacking midfield role, and Richarlison up front.

This is unlikely to be a permanent solution. Richarlison is another who is at his best cutting in from wide. So who are the other options?

There will be a strong home town lobby for Gabriel Batista, ‘Gabi-goal’ who had such an excellent 2019 with Flamengo. But he is not an out-and-out centre forward, and there are still doubts about his capacity to tip the balance at the highest level. He may be too temperamental and over-dependent on his left foot.

Wesley of Aston Villa was called up last year, and played for a few minutes against Argentina. But he has suffered a long term injury. And Joelinton of Newcastle has not proved able to reproduce the fine display he came up with away to Tottenham.

A name gathering increasing momentum is Gabriel Martinelli, who has exceeded all first season expectations at Arsenal. He has already scored as many times for his new club as he managed in regional football with little Ituano, and many are lining up to proclaim him as a future superstar.

Brazil wanted to have a close look at him in the current South American Under-23 Championships which are taking place in Colombia. But to no one’s surprise, he was not released by his club – meaning that, for the moment, the floor belongs to Matheus Cunha of Red Bull Leipzig.

The rangy 20 year old striker made a big impression in last season’s Europa League, finding the target in six separate matches, and then rounding it off with a triumphant youth tournament in Toulon, where Brazil won the title and he was the top scorer.

This season, though, he has found it harder to get going. The Under-23 tournament, then, is a glorious chance for him to pick up some momentum and become better known to the Brazilian public. Illness forced him to miss the opening game.  But he returned to slot home a confident penalty against Uruguay.

Tuesday’s opponents are Bolivia, with some interesting young talents but with little notion of defending against crosses. There should be chances for Matheus Cunha to demonstrate his aerial strength. And then, after the final group game against Paraguay, comes the real stuff – the second round where four teams fight it out for two slots in the Tokyo Olympics.

Matheus Cunha may have his sights on a gold medal. But a bigger prize – that of becoming Brazil’s long term number 9 – is also up for grabs.