Rock of Plenty: the story of football in Gibraltar

At the final whistle, the identical Spanish twins who coach Europa surge out of the technical area at the Victoria Stadium to celebrate a 2-0 victory with their team. The crowd roars, mostly in Spanish, as Dimas and David Carrasco, who wear matching clothes, celebrate.

Since being revived, Europa had not beaten opponents Lincoln Red Imps, who have
won the last 13 Gibraltarian championships.

But for many Gibraltarians, Europa represent all that has gone wrong since the British overseas territory was admitted to UEFA after a long-running membership battle in May 2013.

Since then, the tiny enclave with a population of just 30,000 has, at the top end at least, become awash with cash.

“Before UEFA, no one was paid,” says Europa president Peter Cabezutto. “They got boots or meals, freebies, but not paid like now, where they are semi-professional.”

Europa have 20 teams at different age groups with mostly Gibraltarian players, but since Cabezutto got involved three years ago the first team has been transformed. And the catalyst was UEFA membership.

He says: “We have a couple of Gibraltarians in our first-team squad. Next season, we want two or three playing in the first team.

“Before we didn’t have the prospect of taking a team to Europe. We started with a team of Gibraltarian players and three from overseas, but Lincoln have all the best players. To compete with Lincoln we have to get players from abroad.”

For Europa and Lincoln, playing in UEFA club competitions has a massive impact.
Lincoln got €350,000 for playing in the first round of the 2014-15 Champions League, when they were eliminated 6-3 on aggregate by Faroese side HB. The same season, Europa took part in the Europa League qualifiers as runners-up, were also knocked out and got €120,000.

Small sums, but football in Gibraltar is not like anywhere else in Europe. The clubs all share the same ground and have no discernible income bar UEFA money.

This season, Lincoln went one better, beating Andorran champions Santa Coloma, before going down 3-0 an aggregate to Danish champions Midtjylland in the next round. For that brief sojourn they earned another €550,000.

UEFA does distribute money to other Gibraltarian clubs as part of its solidarity payments scheme, but payments of around €20,000 per club are paltry compared with the riches enjoyed by Lincoln.

Out of a squad of 32 players, Lincoln have eight full-time players and, despite the Europa defeat, are likely to win the championship again this term. More money will follow.

With Gibraltar’s UEFA coefficient rising due to Lincoln’s European success, there is the prospect of another Europa League place in 2017-18, but such is the impact of this money that it could simply extend the hegemony from two clubs to three. 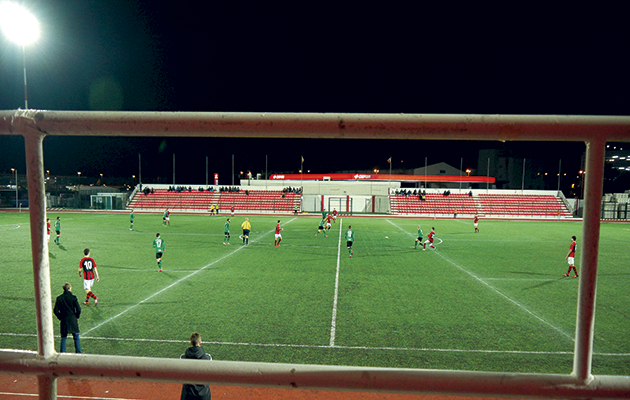 The Gibraltar Football Association (GFA) wants to take action. Chief executive Dennis Beiso says: “Lincoln’s sporting success deserves to be rewarded. Clubs cannot be expected to just give money away, but we can’t have one, two or three clubs running away with a huge slice of the financial pie each year.”

The prospect of revenue sharing has been mooted linked to a wider package of reforms including youth development, but Lincoln are not keen.

“We were champions for many years when there was no money. What are we going to do? Throw it all away and take a step back and give away our prize money?” says president Derek Alman.

“It’s easy to say the league’s not competitive but what makes a league competitive? You need security and loyalty for your players.”

Lincoln’s club policy is that seven Gibraltarians must start every game and at least six must be on the field at the end. Of that 32-man squad, 25 are Gibraltarian including most of the national team.

The likes of striker Lee Casciaro, a border guard who rejected a professional contract with Dagenham & Redbridge citing lack of job security, and Roy Chipolina have been with Lincoln since they were children. When Liam Walker returned home from playing professionally in Israel, there was only one club he was likely to join.

With UEFA money such a tantalising prize, clubs such as Lions are eschewing the old sporting club model on which Lincoln still operates and turning into limited companies backed by investors, who can speculate for success.

Alman cites the costs of playing in Europe. Lincoln sold out their three home European games, but these must be all-seater. Gibraltar’s only ground, the Victoria Stadium, seats just 2,200. With tickets from £5 in the uncovered East Stand to £15 in the main stand, the club does not make a big profit and travelling to Torshavn cost the club €100,000.

UEFA’s money, which makes all this possible, came at a time when the wider Spanish economy is suffering. Suddenly, football in Gibraltar is a realistic option for career progression.

GFA media officer Stephen Gonzalez points to the amount of foreign players with profiles on the Football Manager computer game. These are not players who have drifted across the border looking for a game.

Cabezutto says: “Gibraltar has a strong economy and in Spain some players don’t get paid. They don’t have that problem here and it’s also a way of being seen by other clubs in Europe.”

Locally, rumours abound of top Gibraltarian players – who all have full-time jobs – earning £1,000 a month. Alman will not be drawn on wages, but says the seven overseas players at Lincoln, from Argentina and Spain, are all full-time.

So is Walker, who says: “It’s well away from being a pro league, but you can’t change it all from one day to another. It has to be gradual.”

What change there has been is still massive from five years ago, when clubs played in isolation and the national team’s only regular football was the biennial Island Games against the likes of the Isle of Wight. Since joining UEFA, Gibraltar have beaten Malta and the Faroe Islands, and drawn with Estonia and Slovakia. However, a 4-0 defeat in Germany is celebrated most.

“It’s got better as the games went on and Germany was a turning point,” says Scott Wiseman, who plays in England for Scunthorpe United and is eligible as his mother was born on the Rock.

Allen Bula was coach for the Germany game but the combustible Gibraltarian parted company with the GFA after six years in 2015 due to injudicious remarks to the media. His replacement is the affable Jeff Wood, a former professional with Charlton Athletic, who took over at a difficult time.

With Gibraltar unable to host matches at home due to the Victoria Stadium’s artificial pitch, games had to be played 400km away in Portugal. Around 5,000 Gibraltarians travelled to the 5-0 defeat by Germany according to the GFA, but after 10 defeats, the only reward was a goal from Casciaro in a 6-1 loss to Scotland and one from Jake Gosling in an 8-1 pasting from Poland. Gosling, who is with Bristol Rovers but recently joined Newport County on loan, is eligible as his father was born in Gibraltar.

He says: “I saw they had joined UEFA on the web, spoke to my agent and it went from there. To score against Poland was one of the highlights of my career. I could have scored against Germany. They are things I’ll never forget.”

Although the veteran David Artell and Macclesfield’s Rees Styche have featured, Wood relies mostly on locals, but after hosting Liechtenstein and Latvia at the end of March, Gibraltar have no more games.

Joining UEFA took 16 years of lobbying. Since joining, Beiso describes UEFA as fantastically helpful and the European body has pledged to fund a 5,000-seat stadium at a former barracks at Lathbury.

FIFA membership – and a place in the World Cup draw – is now their aim. Beiso hopes that with UEFA’s general secretary Gianni Infantino now FIFA president, their application will be looked upon favourably. World Cup 2018 qualifying groups H and

I feature only five teams, so including Gibraltar and Kosovo, who are also pressing for recognition, would not be difficult, although Beiso has no guarantees.

Rejection would have major consequences at all levels, aside from lack of internationals. At present, Gibraltarian clubs are not part of FIFA’s transfer matching system, which leaves clubs in a vulnerable position.

With Infantino also proposing to up FIFA’s annual financial assistance payment to $1.25 million a year, acceptance would bring more cash but at least how to spend it would be down to the GFA.

Dennis Beiso
The articulate former public sector worker was the GFA’s unpaid UEFA liaison officer prior to the country’s recognition by the European body and has since taken over as full-time chief executive officer.

Roy Chipolina
A customs officer and stalwart of the national team, of which he is captain. However, if they are not admitted into FIFA and the 33-year-old does not get a chance to play in the World Cup qualifiers, international retirement may beckon.

Jeff Wood
The goalkeeper’s playing career took him from London to Finland, Hong Kong and Malta, before a move into management, first at home then overseas. He first worked on the Rock in 2004 and replaced Allen Bula as national coach.

Derek Alman
President and founder member of perennial champions Lincoln Red Imps, he has employed a full-time foreign coach and some overseas players but retains the core of the national team. Remains a strong opponent of sharing UEFA  prize money.

Peter Cabezutto
President of Europa, only realistic rival to Lincoln’s dominance. After Gibraltar were accepted into UEFA, Cabezutto took control as part of a consortium that included his brother Patrick and Englishman Guy Langton. Europa have five basketball teams and bold plans in athletics, cricket and rugby.

Gibraltar First Division Clubs
Angels
A new club formed in the flush of UEFA membership in 2014, they won promotion at the first attempt and are struggling in their inaugural top-flight season.

Britannia XI
The original club dated back to 1907 but folded before being revived in 2009.

Europa
Originally College Europa, they date back more than 90 years. Europa League qualifiers in the last two seasons and a big youth set-up but have alienated some as the first XI is all Spanish.

Gibraltar United
Another old club, founded in 1943, they reformed in 2014 and under president Paul Collado have a policy of fielding local players.

Glacis United
Formed by players from the Glacis residential estate in the north of Gibraltar in 1965 and still with offices there. Unlike many Gibraltarian clubs, Glacis are still owned by its members.

Lincoln Red Imps
Champions 12 times in a row and 21 times in the last 30 years, the club emerged from former Police side, the Blue Batons. Under the guidance of Raul Procopio they remain the  team to beat.

Lions Gibraltar
Formed in 1966 to celebrate England’s World Cup triumph, the club have a strong youth set-up on the Rock and still have three Lions on their logo.

Lynx
The only side with a Gibraltarian coach, but then boss Albert Parodo also founded the club in 2007. Former national boss Allen Bula is sporting director.

Manchester 62
Originally known as Manchester United, the club changed its name after Gibraltar was accepted by UEFA to reflect the year of its foundation. Have a strong youth set-up.

St Josephs
Named after a residential estate in the south of the territory, where the club is still based.

Steve is a regular contributor to World Soccer. You can read more of his articles here.

This article was originally publishhed in April 2016.

Brazil in a state of denial over footballing decline