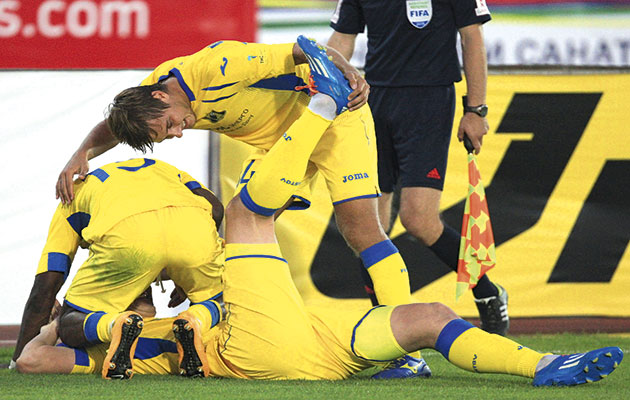 Rostov, once the great underdogs of the Russian Premier League, are closing in on their first title, having been saved from relegation last year by Kurban Berdiyev, the coach who once beat Barcelona at Camp Nou. A league victory would mark an extraordinary turnaround in fortunes for the team that is being dubbed, understandably, the Russian Leicester City.

After beating CSKA 2-0 at home, Rostov were level on points with the mighty Army team with 10 games to go, but occupied top position thanks to a better head-to-head record, having only lost 1-0 to CSKA in Moscow.

Last season Rostov were destroyed 6-0 by CSKA. They also lost 7-3 to Dynamo Moscow and were beaten 5-0 by champions-to-be Zenit. The team were on the verge of quitting the Premier League and at one stage their players had not been paid for five months. Their coach at the time, Igor Gamula, also received a five-game ban for racist comments.

It was at this point Berdiyev came to the rescue. Despite sensational successive league triumphs in 2008 and 2009, he had been fired by Rubin Kazan after 13 seasons in charge following an internal row. Rostov’s new coach brought with him from Rubin important players including defender Cesar Navas, a Real Madrid academy product, Ecuador midfielder Christian Noboa and Iran striker Serdar Azmun.

Despite the reinforcements, the combined value of the Rostov squad has been estimated at just €40million – the ninth biggest among Russian clubs – while their annual budget looks a joke compared to those of Zenit and Dynamo.

Sponsored by the government of the Rostov region, a southern area of Russia on the banks of the Don River, the team has never before been riding so high. Rostov, who celebrate their 85th anniversary in May, only joined the top flight in 1994. Their previous best performance was sixth place in 1998, although they did win the 2014 Russian Cup.

Berdiyev is remembered in Europe for Rubin’s impressive record against Barcelona in the Champions League, including a 2-1 away victory in 2009, which was followed by two draws (0-0 and 1-1) and just one defeat (2-0) the following year. Rubin’s discipline and strictly defensive style became the coach’s trademark, although Berdiyev later declared a change of style with more emphasis on attack.

He brought a new game vision to Rostov. Traditionally mocked for a habit of “parking the bus” which, says ex-Rostov striker Artyom Dzyuba, “would make even Jose Mourinho jealous”, Berdiyev’s team today is a good mixture of solid defence and fast counter-attacks.

The defence is marshalled by 36-year-old Navas, alongside national-team contender Ivan Novoseltsev. Unyielding captain Alexander Gatskan, a Moldovan, forms a holding but creative midfield triangle with the clever Noboa and the explosive Guelor Kanga of Gabon. The fast and technically skilled Azmun is joined up front by another good finisher, Dmitri Poloz. Then there is Soslan Dzanayev, who went through a few error-prone seasons with Spartak Moscow before becoming one of the league’s most reliable goalkeepers.

But Rostov’s biggest star is the coach. Berdiyev is highly religious, an avid reader and chess player, and already is being talked about as a candidate for the national job after Euro 2016 if Russia don’t do well in France or if Leonid Slutskiy, currently combining the two posts, chooses to stay with CSKA.

And Rostov’s league triumph, if it happens, would probably be an even bigger surprise here than Leicester’s success for English fans.