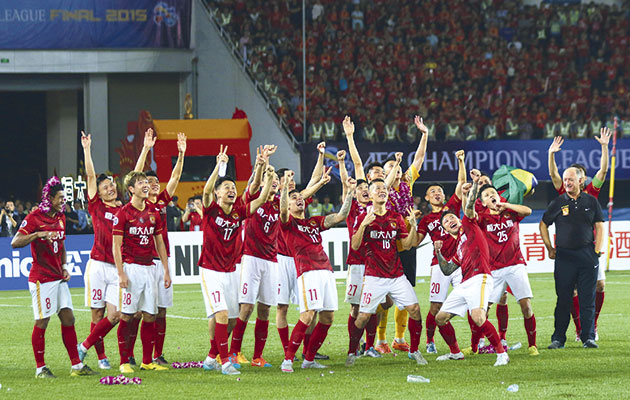 The 2014 World Cup may have ended badly for Luiz Felipe Scolari but he has a quicker than usual opportunity to redeem himself when taking Guangzhou Evergrande to the club version in December. And it has surely not escaped the coach’s attention that the Yokohama venue for the Final is the same Japanese stadium in which he lifted the 2002 World Cup with Brazil.

Happy memories, then, and this year has been a much happier time in general for Scolari.

“Big Phil” took over Guangzhou Evergrande in June and didn’t lose a single game as he led the team to a fifth successive Chinese Super League title.

More importantly, they also picked up a second Asian Champions League title in three years, defeating Al Ahli of United Arab Emirates 1-0 over the two legs in the Final.

The first leg in Dubai ended goalless, with Al Ahli never really threatening despite being led by Cosmin Olariou – a Romanian who has won league titles in his homeland, Saudi Arabia and the last three in the Emirates. It has been a good year for UAE football with a young and exciting team finishing third at the Asian Cup in January, but while Al Ahli have one of the continent’s best strikers in Ahmed Khalil, the team were second best.

Even Olariou admitted that the occasion got to the “Red Knights” as Guangzhou Evergrande controlled proceedings without managing to break the deadlock. Zheng Zhi and Paulinho – who was signed from Tottenham Hotspur in the summer for around $16million – in midfield cut off the supply lines to
Lima who, after joining Al Ahli from Benfica in the summer, had scored in his previous 12 games for
the club. Thirteenth was unlucky for Lima, though, and he rarely saw the ball.

The goalless first leg and the dangers of an away goal didn’t seem to add any tension for the return game as far as the 50,000-plus fans who crammed into the Tianhe Stadium, surrounded by skyscrapers
in China’s third biggest city, were concerned. The “Red Army” never stopped bouncing, singing and chanting as they cheered on their heroes.

If the occasion in the first leg and 9,000 fans got to Al Ahli, the thought of almost six times that amount must have been scary. But the men from Dubai were better in southern China with Lima and Khalil carrying some threat on the break. Even so, Guangzhou Evergrande made most of the running and it was a piece of magic from another Brazilian that finally made the difference, with Elkeson flicking the ball around his marker in the area and then firing home a low shot.

The triumph was another return on a five-year investment of more than $150m put in by Evergrande, a wealthy property developer who took over the club
in 2010.

The 2013 Asian title had come with Marcello Lippi at the helm and had been a thrilling affair, with 22 goals scored in eight knockout games, the strings being pulled by Argentinian Dario Conca. While Scolari’s side managed just 10 goals, he could still afford to bring in Robinho during the summer and not even register the former Real Madrid striker for the continental tournament.

There are bigger fish for Scolari to fry at the Club World Cup. Lippi took fourth place in 2013 and Scolari will want to do better than that, so he – and the club – will take it very seriously indeed.
Winning in Asia is a pre-requisite but in itself not enough. Global success is seen as the key to becoming the first Asian club to enjoy a global profile.