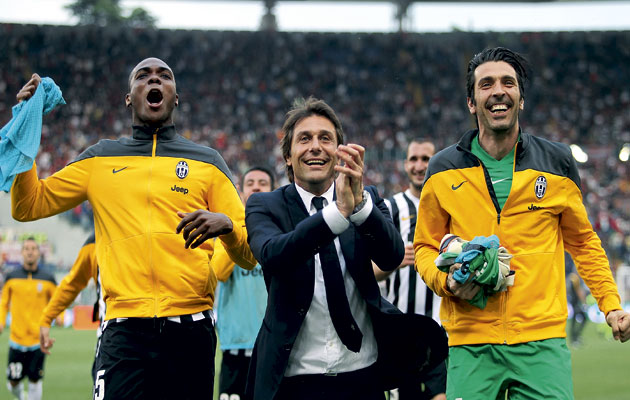 This was always going to be a season that would start under a negative star. By an unfortunate twist of fate, on the night that Uruguay dispatched Italy from the World Cup, Napoli fan Ciro Esposito died. Esposito had been shot by a Roma fan during skirmishes before the Italian Cup Final in May.

Commentators inevitably linked the two events, with Gazzetta dello Sport declaring: “Sometimes fate sends clear signals. Yesterday, our football came to a very sorry end of the road. But the defeat does not concern merely those who took to the field and those who led them.

“This [the death of Esposito] was a defeat for the entire football system which needs to be cleaned and revolutionised from the roots up, from the terraces to children’s teams, and from the professional clubs through to the federation.”

What is true is that Italian football emerged from Brazil totally rudderless, without a federation (FIGC) president or a national coach following the resignations of Giancarlo Abete and Cesare Prandelli respectively.

As for the team itself, commentators had little sympathy, notwithstanding the biting antics of Uruguyan “Dracula” Luis Suarez, with most pundits arguing that Italy had only themselves to blame for their elimination. Gazzetta summed up the national mood, stating: “And so Uruguay and Costa Rica, two countries which between them have fewer inhabitants than the region of Lombardy, have shown us to the door. In truth there are no alibis nor excuses for a side that in two games fails to get a real shot on goal. Nor did the side ever look as if it could and would win.”

Many commentators focused on the same perceived Italian shortcomings: the false sense of security generated by the 2-1 opening win over England; the tactical confusion generated by too many changes from Prandelli; the side’s physical preparation, given that Italy finished each game out on their feet; and, inevitably, the failure of striker Mario Balotelli to deliver either against Costa Rica or Uruguay, in which he was substituted at half-time.

Then, too, there was much speculation about the apparent dressing-room tensions implicit
in the post-match comments of captain Gigi Buffon. Without naming names, the goalkeeper was critical of the younger players who had failed to deliver, leaving it to such as himself, Andrea Barzagli, Andrea Pirlo and Daniele De Rossi to “pull the cart”.

Many commentators suspected Balotelli might have been the prime object of that attack.

With the media involved in lengthy speculation as to who would succeed both Abete and Prandelli, Italian football was further rocked by yet another resignation, that of Antonio Conte, coach of champions Juventus. Even if both parties were keen to stress that this was a consensual, non-contested divorce, the timing of the announcement, on the second day of pre-season training, suggested otherwise.

In truth, there had been indications that not everything was hunky dory between coach and club right from the day in May when Juventus lifted the Serie A title. In particular, many latched onto one intriguing comment made by Conte when asked about next season: “Well, you cannot go to eat at a €100 restaurant with just €10 in your pocket, can you?”

Everyone presumed this was a Champions League reference to the tight purse strings at Juventus, who cannot even begin to match the spending power of the biggest Premier League clubs. For example, the 10-year £750million Adidas sponsorship deal announced by Manchester United means the sportswear giant will be paying them three times as much per year as they pay Juve.

In the meantime, Juventus moved quickly, replacing Conte with former Milan coach Massimiliano Allegri. As for Conte, he was the obvious choice to succeed Prandelli as coach of the national team.

Juventus paid the biggest fee of the summer so far by a Serie A club – €20million for forward Alvaro Morata from Real Madrid – but generally spending has been low key.

Some of the more intriguing transfers have taken place in the capital, where Lazio signed, among others, Dutch World Cup defender Stefan De Vrij and midfielder Marco Parolo. Roma picked up Ashley Cole on his release from Chelsea, as well as highly rated Argentinian forward Juan Iturbe.

However, the build-up to the season was overshadowed by a row involving federation president-elect Carlo Tavecchio. With the new season around the corner, a candidate was needed to fill the void left by Abete. That man was 71-year-old Tavecchio, who for most of the last 15 years has been head of the Italian amateur federation.

During that time, Tavecchio had generally flown well below the radar of national and international media attention. Which, given what he had to say to the assembled Serie A club directors and FIGC officials when presenting his candidacy in Rome in late July, was probably no bad thing.

Outlining the need for stricter controls on non-EU players bought into Italian football, he said: “England checks out players when they arrive in the country to see if they are professional enough to play. With us, however, ‘Opti Poba’, who yesterday was eating bananas, today is first choice at Lazio…”

Even if his remarks prompted only silence from the ranks of the club directors, within hours they had instigated a virulent, web-driven polemic that stretched far beyond the boundaries of football. Fans, politicians and commentators all stigmatised him as a racist, calling on him to withdraw his candidacy.

Initially, Tavecchio declined, although he apologised for his remarks, saying his intention had been to outline the dynamics of a problem currently facing Italian football. Yet within 48 hours, not only FIFA but also the European Commission had expressed their concern about his words, with FIFA’s task force on racism calling on the FIGC to investigate the whole affair – although how it will carry out an investigation into its own presidential election remains to be seen. Regardless of the outrage, Tavecchio was elected to be the new face of Italian football.

In the meantime, UEFA have confirmed they are to investigate his remarks.

What remains, however, will be the sense of an Italian football governing class that simply does not get it. It is not as if the last decade has not seen an unedifyingly long line of racist incidents in Italian football, with the most recent ones last season involving black players Balotelli, Kevin-Prince Boateng and Kevin Constant.