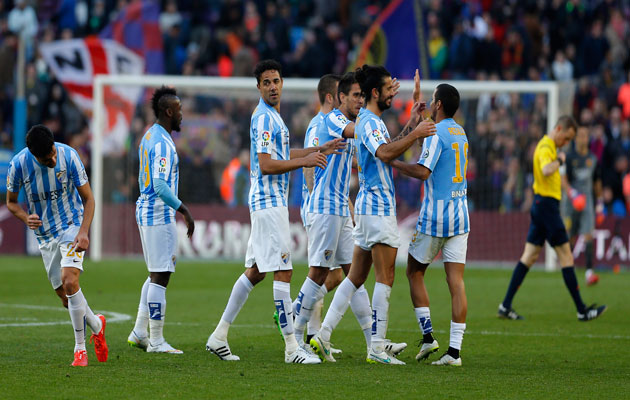 The Deportivo fans had gone but Celta’s supporters were still there, high in the stands at Riazor, when their players came back out to celebrate with them. Their team had just won the Galician derby for the second time this season, the double completed, and they were determined to enjoy it. Celta’s players leapt up and down joining in the songs while the striker Charles recorded it all on his phone.

He was one of the two goalscorers alongside Larrivey in a game that they had deservedly won 2-0. “This is one of the biggest goals of my career,” he said. Not only had he opened the scoring in the derby, he had also been able to dedicate it to a friend whose mother had died a few days earlier.

* A thousand Malaga fans were waiting for their team at the Municipal Athletics Stadium where they train on Sunday morning, cheering and applauding as they strolled out into the sunshine. The night before, Malaga had ended Barcelona’s 11-game winning run with a 1-0 victory at the Camp Nou.

But if Barcelona were poor, Malaga were hugely impressive. The goal may have come from a long punt up the pitch by Carlos Kameni — “yes, let’s call it an assist,” he smiled afterwards — and a terrible mistake from Dani Alves, but this was not just luck. Malaga defended superbly and broke with intent and numbers.

By the final whistle they had taken more shots than Barcelona and had certainly enjoyed more clear chances. A Barcelona team that had scored 42 in 11 games did not manage to add to that tally and Javi Gracia’s team have now got as good a record against Barcelona as against anyone else this season. A draw and a victory in two games and 180 minutes without conceding a goal. Better still, Barcelona have had just three shots on target in total across the two games. “My players deserve a huge amount of credit,” Gracias said.

A crazy game was finally settled with a header in the last minute from Real Sociedad captain Xabi Prieto, whose team had led twice, trailed 2-3 with twelve minutes to go and then scored two to win it. There were seven goals and – get this – 34 shots, 17 each.

* The death of Deportivo fan “Jimmy” in a mass fight before the Atletico-Depor game earlier this season has led to a crusade to stamp out violence from Spanish football, with the league reporting offensive chants at stadiums all round the country. In many cases, there is a risk of them going too far and certainly a false equivalency, denouncing chants that are as harmless as they are meaningless and seemingly placing a few swearwords on a level with a murder.

But one chant that was denounced this weekend is extremely unpleasant. Real Betis striker Ruben Castro has been charged with four counts of domestic violence against his ex-girlfriend and also with making threats against her.