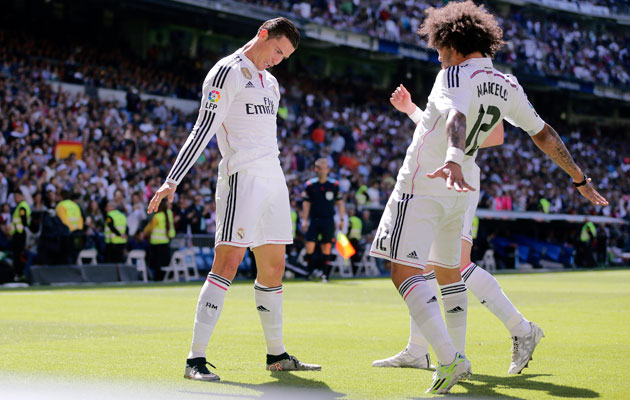 Abel Resino was a record-breaking goalkeeper for Atlético Madrid, for whom he played over three hundred games. This weekend, he travelled to the Santiago Bernabéu as manager of Granada and conceded more goals in one afternoon there than he had in his entire playing career, describing it as “a disaster”, “embarrassing,” “the worst moment of my career as a player or manager.” It was no exaggeration: Granada were hammered 9-1 by Madrid. Nine.

Bale one, Benzema two and Cristiano Ronaldo five, plus an own goal from Diego Mainz, slipped the knife in as Granada’s relegation concerns grew. Even the fact that Granada were resting players ready for a busy week in which they were due to play three times in seven days, Resino admitting to Ancelotti before hand that the next two games “matter more,” was little comfort. “We have to try to forget this quickly,” Resino said.

* Real Madrid on the other hand were enjoying it. This was the first time that Ronaldo had scored five in his career, taking his total at Madrid to 300 and putting him on 36 for the season, four goals ahead of Leo Messi who he had trailed at the start of the weekend.

Meanwhile, the return of Luka Modric and James Rodríguez augurs well for the final nine games of the season as Ancelotti’s team seek to win all nine as they chase Barcelona, four points ahead of them at the top of the table.

The sports daily Marca was busy trying to frighten Barcelona, following a familiar theme which has seen them refer in the past to Barcelona’s “heebie-jeebies” and the infamous “crappingyourselfometre”  by describing Ronaldo as “the bogeyman”. And he’s coming to get them.

* Barcelona’s run-in is the harder of the two but they overcame the first, and extremely difficult post-clásico hurdle with a 1-0 win in Vigo. For much of the game, Celta were the better side but Jeremy Mathieu’s diving header from a free kick gave Barcelona a vital win. It was the Frenchman’s second decisive header in a row, after he had scored against Madrid in the clásico, and they were grateful too to the other centre-back. Gerard Piqué was immense again.

* Fabian Orellana was sent off late in the Celta-Barcelona match for hitting Sergio Busquets in the face … with a clump of grass. Frustrated at how long the midfielder was taking to take a free kick, Orellana picked up the turf and flung it his way, backhanded. It was some shot too, travelling a good seven or eight yards before splatting against its target.

* Atletico Madrid are back in third place after they defeated Córdoba 2-0 and Valencia could only manage a 0-0 draw against an impressive Villarreal team. “If there was a team that looked for this win, it was Valencia,” coach Nuno said. But Marcelino did not agree: he accused the hosts of deliberately letting the pitch dry out to prevent the game from being any good “for the fans.”

“It seems that the sprinkler system doesn’t work,” he muttered.

It was a vital win that pulls them out of the relegation zone and puts them in a much better position to survive at the end of the season. It also cost Almería three vital points and their manager Juan Ignacio Martínez his job. He was sacked on Monday, to be replaced by Sergi Barjuan, the former Barcelona player whose first game in charge will be at the Camp Nou.