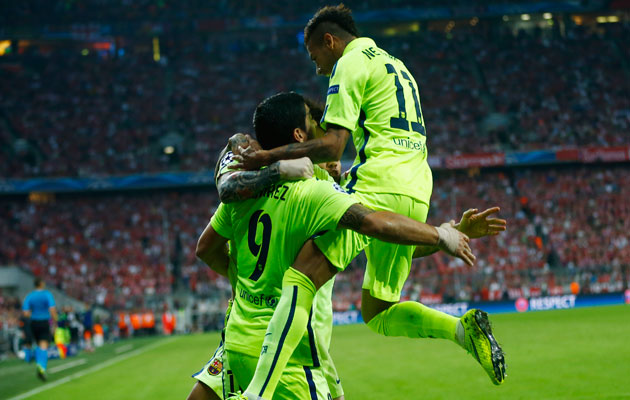 * The Spanish have a horrible habit of insisting that every game is a “final”. It’s a cliché and it’s nonsense. Usually, anyway. But for Barcelona, that’s very nearly true now. Luis Enrique’s team have four games left this season and each time the equation is simple: win the game and win a trophy, lose and you lose it. All or nothing, except in the league where they have one extra life, a one-game margin for error.

With two games to go in the league, against Atlético Madrid at the Calderón this weekend and Deportivo de La Coruna at home the weekend after, Barcelona are one win away from being champions. The week after that, they play the Copa del Rey final against Athletic Bilbao. And the week after that, they play the Champions League final against Real Madrid or Juventus.

The treble is close. A week ago, Luis Enrique was asked why he kept avoiding the issue. “Why don’t you like the word ‘treble’?” he was asked. “I love the word,” he replied. But he insisted: you can go from three to nought in the blink of an eye. True, of course. And Barcelona could yet end the season empty-handed.

Few expect that to happen now, though: Real Madrid’s 2-2 draw with Valencia last weekend means that even if Barcelona were unable to win at the Calderón — the game that Madrid fans clung to as their greatest hope, awaiting a favour from their city rivals — they would still take the title if they beat Deportivo at the Camp Nou. In the Copa del Rey final, they were favourites against Athletic anyway and the game is now being played at the Camp Nou.

That leaves the Champions League final … which could yet be a clásico, for the first time ever, and would eclipse all else. Even a league and cup double. Three finals in four games, an entire season in one final.

* Barcelona can clinch the league title this weekend, if they even play. With two games to go, the players’ union, the AFE, has called a strike, while the Federation, the RFEF, has announced that it was stop football “indefinitely” from this Saturday onwards.

The root of the dispute is the new law that governs the sale of TV rights in Spain and is effectively a new constitution for Spanish football. The law impose a collective deal for TV rights and was backed by all of the football authorities but, while they supported that principle, the AFE and the RFEF are unhappy at the content of the decree and have decided to act before it goes through congress.

They feel that they were not consulted sufficiently during the process and that the law serves to diminish their influence over the game. The new decree, written up by the government under the guidance of the LFP, seeks to undermine the RFEF, shifting power away from them, effectively becoming a kind of coup d’etat. To which the RFEF, a body for whom accountability and openness have been alien concepts, has reacted.

It has been getting nasty, too, with mutual accusations and little sign of real dialogue, at least between Villar (who has refused to attend any of the meetings) and Tebas. Some of the arguments presented have been so weak, so cynical, as to be almost funny. The courts will decide if the strike is declared illegal, but that would not necessarily resolve the issue of the REFF stoppage and there is a risk of FIFA becoming involved too, considering the passing of a law as political interference in football.

And all the while, the clock ticks and the fans become the victims. Again.

* Rant of the week came from Córdoba striker Florin Andone as his already-relegated team lost yet again. “I’m annoyed because I’m awful,” he told a local radio reporter. “I can’t even play a fucking pass, and the team’s the same. I’m sick of everything, mate.

“It’s like we’re all here thinking about next season and we’re not even trying to rescue some dignity in these last three games. If we’re bad, we’re bad, mate, but we’ve at least got to show some fucking attitude and try. We can’t just go out there and let them laugh at us.”