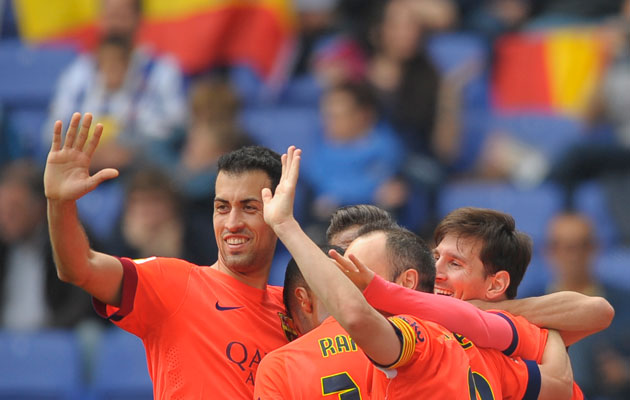 * In June 2007, 18 preposterous seconds cost Barcelona the league title, handing it to Real Madrid instead, and left Espanyol’s fans in a state of delirium. With the clock showing 89.30 on the penultimate week of the season, Barcelona were winning 2-1 in the Catalan derby against their city rivals, while Madrid were losing 2-1 in Zaragoza. The title was as good as Barcelona’s: they’d be three points clear with a week to go and an easy week at that.

But then at 10.47 p.m. and 19 seconds, Ruud Van Nistelrooy scored the equaliser in Zaragoza; and at 10.47p.m and 37 seconds, Espanyol captain Raúl Tamudo scored in Barcelona. Suddenly, the title was Madrid’s.

“Someone up there likes us,” said David Beckham. One Catalan-supporting match reporter called it “the fuck of the century”, his words splashed across the page in big yellow letters.

This weekend was never going to be quite as big as that, but Espanyol fans were again dreaming of ruining it for their rivals. Barcelona led the league by two points with six weeks to go. Win, draw even, and they would laugh as Barcelona slipped into second. The Power8 stadium was full, and all of them were Espanyol fans: there were no Barcelona supporters there. In the papers, they had been talking it up; a team with nothing to play for had something very special to play for, for one week only.

It didn’t happen and was never likely to. Instead, Barcelona dominated. Two superb goals, one from Neymar, the other from Messi, both beautifully made and both assisted by Luis Suarez gave Barcelona a 2-0 lead that, unlike in Seville, they never looked like relinquishing. More likely was the possibility of them adding to it. In the end, they didn’t, but this was Barcelona in control and although Jordi Alba was sent off for saying “always me” to the referee – “it’s not exactly the title of a horror film,” Luis Enrique noted – they were comfortable winners. Impressive winners, too. In recent weeks, their form has been exceptional, even if rarely for a full 90 minutes.

The win was a big one, “half a league title,” one paper called it. Barcelona came through a four game run that included Celta, (Almeria), Sevilla and Valencia having only dropped points in Seville. That made their lead at the top vulnerable, down to only two points, but they were still top. And now it is Real Madrid who go into that run of difficult games. With five games to go, attention now turns to Barcelona’s visit to the Calderon on the penultimate weekend of the season.

* It wasn’t easy, but Madrid aren’t giving up yet. They began the game with Celta de Vigo five points down and were quickly 1-0 down. But they found a way back. From 1-0 to 1-1, then 1-2, 2-2 and 2-3, it went. And then 4-2. A superb game with 29 shots finally fell Madrid’s way; the first hurdle had been overcome. Chicharito Hernandez scored twice, meaning he is now running at better than a goal a game, and James Rodriguez had been superb.

Perhaps the best performer though was Celta forward Nolito, who scored a brilliant first and ran rings round Madrid’s defenders, bamboozling them almost as much as he bamboozled everyone else when, after the game, he was asked about a possible penalty shout. “Talking about referees is like asking a lemon tree for cup cakes,” he said.

* Eibar manager Gaizka Garitano, interviewed in World Soccer this month, walked out of the press conference at the end of his team’s 2-0 defeat at Almeria after two journalists moaned that he answered a question in Basque. That is a Basque manager of a Basque team answering a question in Basque that had been asked in Basque by a journalist from a Basque TV channel, just as he does every week… before answering the other questions in Castillian Spanish.