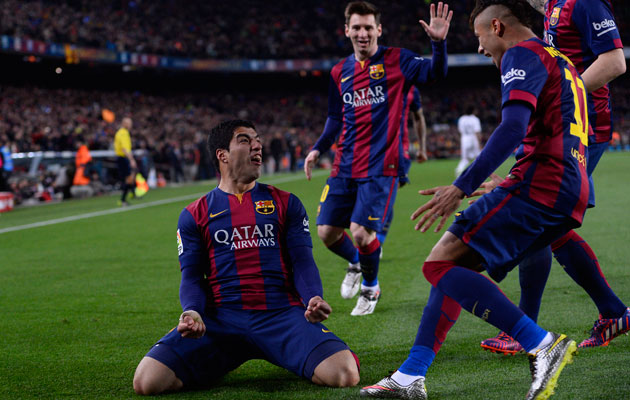 * Barcelona moved four points clear at the top of the table with a 2-1 clásico victory over Real Madrid, secured thanks to goals from Jeremy Mathieu and Luis Suárez. Mathieu scored with a header from a Messi free kick (his twenty-second assist of the season), before Cristiano Ronaldo equalised, assisted by a gorgeous backheel from Karim Benzema.

Madrid were on top, taking control and creating chances. But then, ten minutes into the second half, out of nothing, Suarez scored the winner. He brought down a long ball from Dani Alves with a sublime touch, finishing into the far corner.

“Bow down to Suarez,” ran one headline, alongside a photograph of the Uruguayan somewhere beneath a pile of bodies in blaugrana.

“This is an even more worthy win because it was against Real Madrid,” Luis Enrique said. “They’re the European Champions, they are a team of our level, with the strength and talent that we have. The players knew how to resist when they did not have the ball and enjoy it when they did. It was a very complete, very intense game from both teams and this is a lovely win for us, because it’s our eternal rival.”

* “I am satisfied with the way that we played,” Carlo Ancelotti said.

After Madrid’s recent crisis, there was at least some comfort in the performance, if not in their league position. For almost an hour, Madrid had been impressive, enjoying much of the ball creating chances, hitting the bar and having a second goal ruled out for offside, but they had not taken their opportunities and they paid for it.

And as Pepe put it: “That second goal killed us.” There was no way back, but many concluded that despite the defeat Madrid were on their way back, the crisis now behind them. There will still be concerns, about the way they tired late on, though.

* Luka Modric and Karim Benzema were particularly outstanding as Madrid took control in the first half. They look a different side with the Croatian in midfield. He was involved in the goal, beautifully set up by Benzema, and completed 55 of 58 passes and won back possession eight times, more than anyone else.

* At the start of the season, Luis Enrique was not convinced by Gerard Piqué. The centre-back was left out of the team a number of times. That is unthinkable now. He has been superb in recent weeks and was better still in the clásico. As Madrid pressured, taking possession and creating chances, it was Piqué who held Barcelona together. 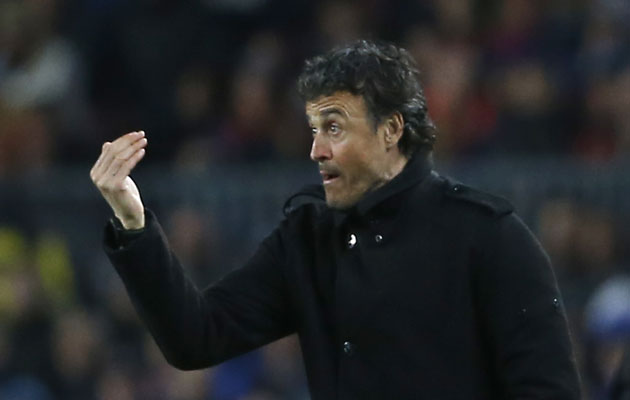 Barcelona coach Luis Enrique didn;t know whether to encourage his players to proetc their lead or extend it.

* “The only pity was that we didn’t equal the [head-to-head] goal difference,” Luis Enrique said. At the end of the season, if the two teams are level, it is their head to head record that will decide who takes the title. Madrid won the first game 3-1, Barcelona won the second 2-1.

In the last twenty minutes Luis Enrique admitted that he was going through mixed emotions, caught between chasing a third or fourth goal or protecting the lead they had. The win was the most important thing but scoring a third would have effectively been worth an extra point.

“I wanted us to have control but seek chances through that,” he said.

Instead, the game remained open and pretty chaotic, Barcelona bombing forward still. They could have got the goal they sought too. A game that they might have lost heavily could ultimately have been won by four or five. Neymar hit two shots wide, Messi put a curler just past the post and Casillas saved from Jordi Alba and from Messi.

* Asked what he thought about the vital saves made by Claudio Bravo, Luis Enrique replied: “Well, that’s what the goalkeeper’s for.” Sport newspaper called him a “saint.”

* It took Luis Suárez 577 minutes to score his first league goal for Barcelona, but he’s now got eleven since the turn of the year and seven in seven. “This was my most important goal for Barcelona,” he said. It was the first clásico Suárez had played at the Camp Nou but not the first he had been to: he was there when Barcelona beat Madrid 5-0 under Pep Guardiola.

* The world was turned upside down; Barcelona and Real Madrid are crossing paths and exchanging identities. FC Barcelona won 2-1, scoring one with a header from a free kick and the other via a long ball. The shift in style under Luis Enrique continues; a team that was once all about control now seems comfortable amidst the chaos, ready to play on the break. A

fter the game Luis Enrique was asked if Real Madrid now look more like Barcelona than Barcelona do. When he was asked about their tendency to play on the counter-attack, he shot straight back: “recursos”: it is something you resort to, rather than something you necessarily aspire to as a badge of identity. “It’s not only about possession,” Javier Mascherano said … as an angry mob grabbed their torches and pitchforks.

* Speaking of identity, for the first time in twenty-four clásicos, there were more Spaniards in Real Madrid’s starting XI than there were in Barcelona’s.

* “It’s harder now and we’ve been hurt by this but we will not give up,” Carlo Ancelotti said. The gap at the top of the able is four points but should the teams finish level, Madrid will take the title not Barcelona.

Both teams have to go to Sevilla, who have not lost at home in a year, play third-placed Valencia at home, and face Espanyol. In theory, that run is harder for Barcelona, for whom the game Espanyol is a derby, which it is not for Madrid and those games come in the midst of their Champions League quarter final with PSG, while for Madrid the run comes later. Barcelona also have to go to Atlético on the penultimate weekend of the season.