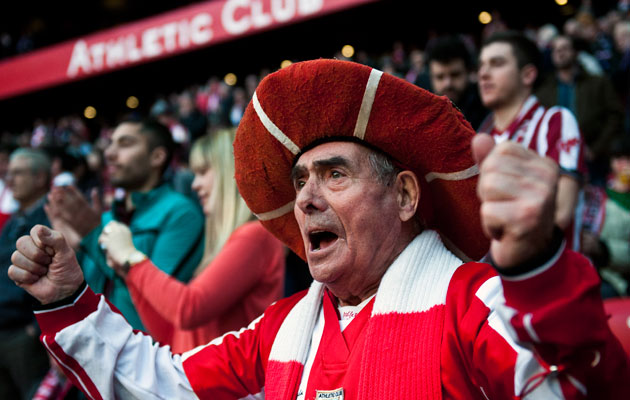 * Real Madrid finished 2014 as World Club Champions. The final in Morocco was their 22nd consecutive victory. 2015 began with a friendly defeat in Dubai against Milan and then a 2-1 loss in Valencia. It has not got much better since: they were knocked out of the Copa del Rey by Atlético, then hammered 4-0 by their city rivals in the league. Now, here they were defeated in Bilbao for the first time in five years.

“It is an attacking problem,” Ancelotti admitted. In the 15 games before Christmas, Ronaldo, Benzema and Bale scored 39 goals; since Christmas, they have scored just 15. Madrid have dropped from 3.6 goals per game to 1.7.

Sixteen weeks later, Barcelona are top of the table. Real Madrid have dropped five points in a week, losing 1-0 to Athletic Bilbao six days after a 1-1 draw with Villarreal. The following morning, Barcelona defeated Rayo Vallecano 6-1 to move a point clear. In two games, the most expensive forward line in history had scored just one goal — and that was a penalty.

“Some managers say: ‘this is not my team’ when they play badly,” Carlo Ancelotti said after the game in Bilbao. “No, this is my team and we’re playing badly.” 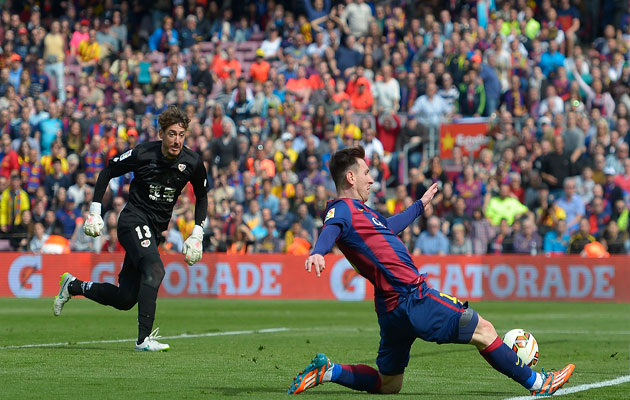 In form Lionel Messi made it a record breaking 32nd hat-trick against Rayo Vallecano.

* Barcelona are top, Messi is top scorer. Twelve goals behind Ronaldo in mid-December, he is now level on thirty. A hat-trick against Rayo took him to 32 in his career — more than anyone else in Spain, ever. 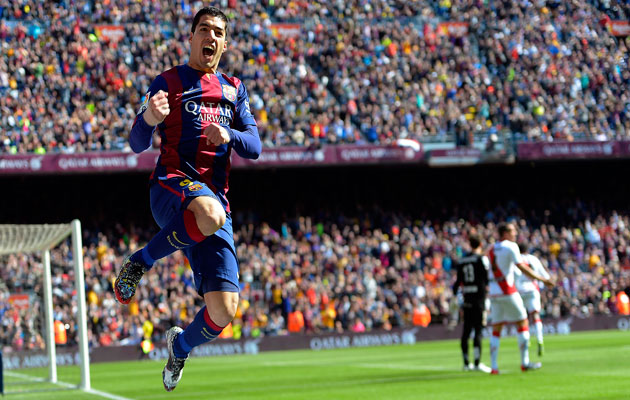 * Luis Suárez is flying. He got two against Rayo and was the team’s most decisive player. In barely a fortnight, his goals have put Barcelona on course to knock out Manchester City in the Champions League, seen his side through to the Copa del Rey final, and now put them top of the table.

* It was the perfect week for Athletic Bilbao. On Wednesday night, they beat Espanyol to reach the final of the Copa del Rey and three days later they beat Real Madrid 1-0. Aritz Aduriz scored in both games, of course: Athletic have only scored one goal all season when he has not been on the pitch.

* The weekend’s best bit of skill came from Elche striker Jonathas, possibly the single most important player for his club in Spain. He bamboozled the defender with a Ronaldinho-esque rubber-ankled piece of skill before providing the perfect cross for his side’s huge 1-0 win against Almería. Elche are out of the relegation zone.

* The former Osasuna president Miguel Archanco and the director Txuma Peralta have been remanded in custody because of an unexplained 2.4m euro shortfall in the club’s accounts, which has been linked to the alleged fixing of matches. Four other directors have been charged.

The investigation began after a confession from the former general manager Angel Vizcay who told the LFP that Osasuna had paid to fix games at the end of the 2012-13 and 2013-14 seasons.

Getafe, Valladolid, Betis and Espanyol are the clubs implicated, according to Vizcay’s confession, which outlined the amounts allegedly involved and the way in which the fixing was organised.