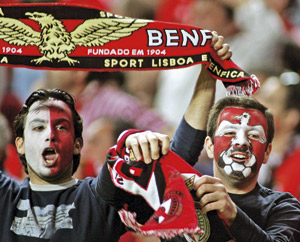 The Benfica-Sporting rivalry celebrated its centenary in 2007.

O Classico, as the derby is known, represents a century of antagonism, traditionally between the people’s team of Benfica and the aristocrats of Sporting.

Today, there is no real class or geographical divide between the supporters – the clubs, who have 350,000 members between them, attract fans from all over the city and from all social groupings. They are also both major commercial concerns, each having a superbly equipped stadium that was completely rebuilt to host Euro 2004. But the prejudices run deep, and the intensity of the rivalry appears to be heightened by the fact that the stadiums are less than two miles apart.

Benfica have had the better of the derby meetings down the years, just as they have won more domestic titles and cups than Sporting and also more continental trophies (two European Cups to Sporting’s single Cup-winners Cup). Sporting have won only a dozen or so league games at the Stadium of Light since the 1930s; the Eagles have a much better record at Sporting’s Jose Alvalade stadium, including a 2-0 victory last December.

The English rendition of Benfica’s stadium title is, of course, a misnomer – “Luz” does mean light in Portuguese but the stadium takes its name from the Luz district of Lisbon where Benfica settled after several moves in the north of the city, including the Campo Grande district, where Sporting were based.

Benfica were formed in 1904 by the union of two smaller clubs, one with an Eagle badge but no ground, the other with access to the pitch at Benfica, a district of the city. The members were the educated sons of middle-class families, ex-pupils of a school in the Belem district, led by Anglophile Cosme Damiao, the club captain. They adopted red shirts and the motto “One For All”. Despite this, and his international leanings, Damiao insisted that only

Portuguese nationals play for the Eagles.

Half the members left to help form Sporting two years later, under the auspices of the Viscount of Alvalade, a local landowner. They adopted the rampant lion of Count Don Fernando de Castelo Branco, another club benefactor. Their original shirts were white, with green added later. Hoops were adopted from the rugby shirts the team borrowed when on a tour of Brazil in the 1920s.

The first derby, in December 1907, was played in pouring rain, and Sporting, with eight former Benfica players in their line-up, beat their new rivals 2-1. Damiao, of all people, scored an own goal after slipping as he tried to clear the ball.

A year later, Sporting won again, in a regional championship game that took place in an atmosphere of violence and intimidation.

The national league championship did not begin until 1938-39 but the green-and-whites soon became the dominant force, winning seven titles in the eight seasons from 1946-47 to 1953-54. Those were the days of Sporting’s “five violins” forward line, which included the prolific Fernando Peyroteo, who shares the derby scoring record with Eusebio.

In 1956, Sporting opened their new stadium, naming it after Jose Alvalade, grandson of the viscount and also a leading light in the club’s formation. At the same time, Benfica built the Stadium of Light, almost entirely from supporters’ donations.

In 1960 word reached Lisbon of Eusebio, a Mozambican who had a shot like a rocket. Benfica won the race for his signature, bending the club rules to allow a foreigner to join, and the rest is history. With the Black Panther on board, Benfica dominated Portuguese football over the next decade, when they also won their two European Cups. Their fame has lived on across the continent, despite the fact that the club treaded water in the 1980s and 1990s.

Sporting were left to play second fiddle. Indeed, the rise of Porto further dented the Lions’ status. Sporting have won the odd

title in the intervening years (their successes of 1999-2000 and 2001-02 were their first since 1982), but are still usually second favourites against the other sides of Portugal’s Big Three.

Still, O Classico has its own niche in the Portuguese game. Eusebio scored both goals in Benfica’s 2-0 win in December 1973, one of his last derbies, although it did not prevent Sporting from going on to win the title. The game had a tragic aftermath – referee Fernando Leite and the two linesmen were killed in a car crash on their way from the stadium.

The fixture list always pits the two clubs together at the end of the season, meaning that the game has often effectively decided the title. In 1984, under Sven Goran Eriksson, Benfica clinched the championship with a 1-1 draw as Porto, their closest challengers, lost. In 1994, the Eagles took the title more spectacularly, with a 6-3 win at the Alvalade.

Benfiquistas had to wait until 2005 for another title, which they virtually secured with a 1-0 win at home to Sporting. Porto kept Benfica waiting to make it absolutely certain, but that was hardly the point. 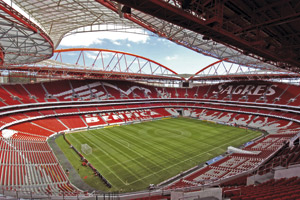 Benfica’s gleaming Stadium of Light (Avenida General Norton de Matos; +351 218 627 000) and Sporting’s Jose Alvalade (Rua Fernando da Fonseca) are in the north of the city. Both were entirely rebuilt for Euro 2004, but retained the name of the 1950s arena they replaced.
The Benfica remodelling, Project Luz, was the responsibility of Damon Lavelle and his HKO Sport team of architects, who provided Sydney with its Olympic stadium. Lavelle remained true to the concept of the original Luz, keeping its red arches, while building around it a complex of shops, restaurants and a health club. Eusebio’s statue remains.
The nearest metro station is Colegio Militar/Luz on the blue line. There are any number of options for a pre-match drink and snack in the four-tiered arena. The capacity is 65,000. Tickets are sold at 25 offices around the ground up to two weeks in advance. You can also buy them by phoning: +351 707 200 100.
The 50,000-capacity Alvalade is at Campo Grande on the yellow and green metro lines. The new ground has a multiplex cinema and health club, as well as a number of places to eat and drink. You can order tickets for a seat in either of the touchline stands (Bancada A or B) from the club’s website for around €25 (£17). You can pick them up at the ground from three days to two hours before kick-off.
Benfica’s ground is the de facto national stadium since Lisbon’s Estadio Nacional has only basic facilities. It is also harder to get to – it is located deep in the woods of Caixas, a 30-minute tram ride from the city centre followed by a 15-minute walk. The stadium, where Celtic won the European Cup in 1967, is used for Portuguese Cup Finals.
You can also reach it from Belem, the location of Lisbon’s other top division club, Belenenses. They play at the modest Estadio Restelo, next to Belem station. Regular suburban trains run there from the Cais do Sodre station in the city centre, a journey of 10 minutes.

Lisbon airport, Portela, lies just 7km from the city centre. The Aerobus (€2.50; £1.70) runs into town every 20 minutes; a taxi should cost about €10 (£7). Long-distance trains arrive at Santa Apolonia station, just east of the centre. Lisbon’s public transport consists of a four-line metro system, buses, trams and charming, antiquated funiculars and public lifts. Timetables and fares can be found at here. Taxis are cheap and plentiful. If you can’t find one, call 218 119 000.

Local food is bland but plentiful. Cod abounds. On the central Rua das Portas de Santo Antao, the Casa do Alentejo (No 58) and Solmar (No 108) are great settings. Pap’ Acorda (Rua da Atalaia 57) is a fashionable choice in the Bairro Alto, Lisbon’s nightlife hub. Good bars include Lisbona (No 196) and Portas Largas (No 103) on Rua da Atalaia and the nearby Estadio (Rua Sao Pedro de Alcantara 11).  For coffee, the Cafe Nicola  (Praca Dom Pedro IV) is an institution.

Apart from Se Cathedral and the Castelo de Sao Jorge, central Lisbon lacks must-see sights. The district of Belem, with its fabulous Jeronimos Monastery, Monument to the Discoveries and Belem Tower, provides the best diversion. The Oceanario at the Parque das Nacoes Expo 98 site is the world’s second biggest aquarium. Lisbon offers old-style shopping along Rua da Conceicao and around Chiado. There, on Rua do Carmo, Armazens do Chiado is a grand department store.

The after-hours scene is down at the river. The stand-out club is Lux (Avenida Infante Dom Henrique), near Santa Apolonia station.