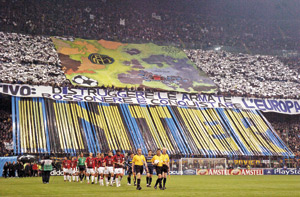 A bitter, century-old rivalry at one of the game’s greatest arenas in a traditional football capital – that’s what’s on offer twice a season when Internazionale take on Milan at their shared stadium, the San Siro.

With more than 50 European and domestic trophies between them, the clubs can justifiably claim to represent the most successful football city in Europe, if not the world.

The story begins in 1899, when Englishman Alfred Edwards founded Milan Cricket and Football Club for expats and well-to-do Milanese, who would meet over cocktails at the American Bar in town. British influence was still strong as the club evolved into Milan FC, so much so that its Italian and Swiss members met at the Orologio restaurant on March 9, 1908 and agreed to break away to form their own club. Echoing the multi-national nature of their group, they decided on the name Internazionale.

Thus was born one of football’s great city rivalries. Milan FC, later to become AC Milan, won the first championship derby, in January 1909, but Inter romped to 5-0 and 5-1 wins in 1910 on their way to taking the title.

In time, Inter would appeal to high society. The blue-collar followers of Milan are known as the cacciavite, or screwdrivers. Inter, in blue-and-black stripes, are the nerazzurri; Milan, in red and black, the rossoneri.
In the early years Inter played at the Arena, just behind the Castello Sforzesco in the north-west of the centre, now used for junior athletics. Inter’s Italian roots found favour with the Fascist authorities. As Ambrosiana-Inter (the name Internazionale was deemed too Leninist), and fired by the goals of the charismatic Giuseppe Meazza, the nerazzurri won three titles.

Their rivals were backed by a member of the original Milan FC cocktail set, car tyre magnate Piero Pirelli. He financed the building of a new stadium, in the San Siro district in the west of the city, designed on the English model, with four stands built close to the pitch. The stadium was inaugurated on September 19, 1926, with Inter beating Milan 6-3.

After the war, the San Siro was revamped, given another tier and its distinctive candy-twist appearance around the outside. Inter moved in to groundshare in 1947-48, and the San Siro crowd enjoyed some of the greatest derbies – Inter’s legendary 6-5 win in November 1949 was the first city clash seen by their current president Massimo Moratti.

But Milan bounced back. After buying top foreign stars such as the Swedish Gre-No-Li trio of Gunnar Gren, Gunnar Nordahl and Nils Liedholm, followed by Jose Altafini and Juan Schiaffino, they won five Serie A titles in 11 years before becoming Italy’s first winners of the European Cup in 1963.

Inter, with oil millionaire Angelo Moratti, Massimo’s father, as president and livewire coach Helenio Herrera at the helm, matched Milan’s European Cup feat a year later, and won it again the following season. Milan also won a second European Cup, in 1969, but neither club could sustain their success. It took Silvio Berlusconi’s television millions to revive Milan in the late 1980s, with the hiring of adventurous coach Arrigo Sacchi and the purchase of Dutch stars Ruud Gullit, Marco Van Basten and Frank Rijkaard. Inter had German World Cup winners Lothar Matthaus, Jurgen Klinsmann and Andreas Brehme. Milan won the title again in 1988, Inter a year later. There were good times for the stadium, too, with a £50million revamp for the 1990 World Cup.

Milan went from strength to strength, with Franco Baresi and Paolo Maldini at the back, and classy foreigners such as Dejan Savicevic, Zvonimir Boban and Marcel Desailly. The rossoneri’s high-tempo pressing game won them scudetto after scudetto and entertained even Berlusconi’s neutral viewers. The high point was the 4-0 win over Barcelona in the 1994 Champions League Final.

Milan still spells success, despite occasional dips in form and involvement in Calciopoli. The current side, under Carlo Ancelotti since 2001, includes world-class players such as Kaka, Clarence Seedorf and the evergreen Maldini.

Inter spent almost two decades in the doldrums, despite serious investment from Moratti and the arrival of Ronaldo (now at Milan) and Christian Vieri. They lost on “away” goals to Milan in the 2003 Champions League semi-finals and lost again two years later in the quarter-finals, the second leg abandoned when Milan keeper Dida was felled by a firework thrown by an Inter fan with the rossoneri leading 3-0 on aggregate.

But Inter, not involved in Calciopoli, were named champions in 2006 after Juventus and Milan, who had finished first and second, were punished for their part in the scandal. Inter won the Serie A title for the next four years until their old rivals bounced back  to claim the title last season. 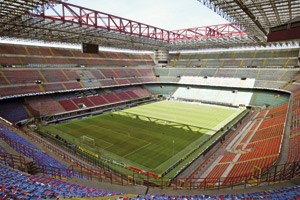 The San Siro is named after the district west of the city centre where, in the 1920s, Milan president Piero Pirelli commissioned a football-specific stadium – no running track and a stand on each side.

It staged a semi-final of the 1934 World Cup and was acquired by the City of Milan in 1939, when the corners were filled in to raise capacity to 55,000.
In 1955 a second tier was added, plus the distinctive walkways around the outside, which create a candy-twist appearance.
Capacity was now over 85,000, with 60,000 seated. For the 1990 World Cup, a plexiglass roof with red girders was added, as well as a third ring, and an all-seated capacity of 85,000, which remains to this day – although security measures have recently restricted this to 83,000.
Eleven concrete towers are dotted around the ground, four supporting the roof. Fans hang almost over the pitch in the steep-sided tiers. Such intimacy allows for one of the most fiery atmospheres in Europe. The Curva Nord is the Inter fans’ traditional area, Milan fans have the Curva Sud.
For the San Siro, take the M1 metro line to Lotto, where shuttle buses run the short trip to the stadium.
Tickets for Inter and Milan can be booked online. The average second ring seat is about €30 (£20). You can tour the arena and museum during the day if there is no major event on. The tours (+39 02 404 2432; €12.50/£8.70) start at Ingresso 14, where there is also a souvenir shop. 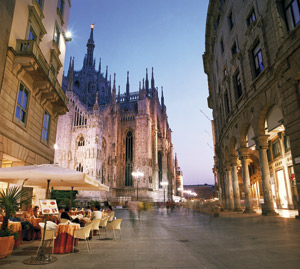 Milan has two airports. Malpensa is the main one, a 40-minute journey to central Cadorna metro station on the half-hourly Malpensa Express (top picture). Linate handles mainly short-haul flights and is connected by city bus No 73, journey time 30 minutes. Milan’s city transport authority ATM runs a three-line metro system, plus buses, trams and trolleybuses. A daily passis valid for all.

Bars and nightclubs around the fashionable Corso Como include footballers’ hang-out Hollywood (No 15; +39 02 659 8996) and the Casablanca Cafe (No 14; +39 02 6269 0186). More laid back is the scene around the canals, where you’ll find the football-themed Osteria del Pallone (Viale Gorizia 30). Back in town, the English Football Pub (Via Valpetrosa 5) is filled with souvenirs.

Any sightseeing tour must begin with the Duomo, the vast Gothic cathedral. Take the lift to the top for breathtaking views as far as the Alps. The Castello Sforzesco is a monolith built in the mid-1300s. After falling into disrepair, it reopened as a museum in the early 1900s. Today, it houses Egyptian sarcophagi and masterpieces of the Renaissance. By day you can tour the vast opera house, La Scala.

Milan is a fashion capital – Via Montenapoleone and Via Manzoni are the sites of the flagship Gucci, Gianni Versace and Louis Vuitton stores, and the Giorgio Armani superstore.