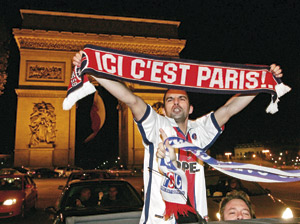 Paris’ role in the history and development of the world game cannot be overstated. The World Cup, the European Championship and the European Cup were devised and agreed on in the boardrooms of the French capital, which has also played host to many Finals. The most memorable have involved France themselves – the European Championship win of 1984 starring Michel Platini and the 1998 World Cup triumph starring Zinedine Zidane.
Both the 1984 venue, the Parc des Princes, and the Stade de France, the arena built for 1998, are international stages worthy of the biggest occasions, and few European cities have such fine facilities.

Parisian club football has a chequered history, however. After a handful of local amateur clubs won national titles in the early years, Racing Club de Paris became the leading lights in the 1930s, the team comprising international names and attracting high society to the Colombes stadium.

Racing did the league and cup Double in 1936, and the stadium hosted the 1938 World Cup Final. But after the war the club’s star gradually faded and Racing were dissolved in 1966.

Dismayed that Paris did not have a flagship team, 20,000 local football lovers donated funds for a club to be formed by joining forces with Saint-Germain-en-Laye, who had just won promotion to the second division, at the start of the 1970-71 season. The new entity, Paris Saint-Germain, won promotion to the top flight in their first season, but a subsequent split at the club led to PSG being demoted to the third division and they spent the next two seasons battling their way back up again. By this time they were under fashion designer president Daniel Hechter, who came up with the club’s distinctive blue shirts with red stripe. PSG also moved into the recently-reconstructed Parc des Princes, which until then had hosted football and rugby internationals.

Paris truly regained its status as a football city in the 1980s. Either side of Platini lifting the European Championship, PSG won back-to-back French Cups and, in 1986, a first league title, having spent heavily on top players such as Luis Fernandez, Kees Kist and Osvaldo Ardiles.

Meanwhile, investors and sponsors had poured a fortune into resurrecting Racing Club, now Matra Racing, including buying foreign stars Pierre Littbarski and Enzo Francescoli. But the bubble soon burst for both clubs, who had only gate money and modest domestic TV revenue for income. The star names left and the clubs foundered.

PSG were rescued by a lucrative deal with pay-TV company Canal Plus, while Racing re-emerged as Racing 92. The club, now Racing CFF 92, play in the fourth division, along with Red Star 93, another famous old Parisian club founded by Jules Rimet, the man behind the World Cup. Another club, Paris FC, lie mid-table in the third division.PSG, meanwhile, enjoyed another revival in the 1990s when David Ginola was the star attraction, winning the Cup and the League in consecutive seasons. Although the pin-up boy soon left, for Newcastle, the club progressed. Luis Fernandez was now the coach and he steered the club to victory in the European Cup-winners Cup in 1996.

PSG could not maintain the success. Having usurped Marseille’s position as top dogs in France – and instigated a fearsome rivalry that too often spills over into violence – PSG saw Lyon overtake them in turn. Despite investing in high-class Brazilians – Rai, Leonardo, Ronaldinho – the Parisian club were unable to reconcile boardroom differences or cope with the pressure of expectations from above when so much money was at stake.

PSG have enjoyed occasional domestic cup wins but rarely shone again in Europe. They have also performed erratically in the League, finishing in the top five one season, only to face a relegation battle the next.

The press is always full of tales of the club’s financial woes, and PSG have a terrible image problem, attracting rowdy young elements – some with racist sentiments – from the suburbs. Matters came to a head in November 2006 when a PSG fan was shot dead by a policeman during scuffles after a UEFA Cup home tie against Hapoel Tel Aviv.

But, unless Marseille are in town, a visit to the stadium to see PSG is a pleasant diversion if you’re in the City of Lights for the weekend. The Parc is easily accessible on the Metro from anywhere in town, and there is also now a decent restaurant there after a recent upgrade. Although games are well attended, tickets are quite easy to come by. 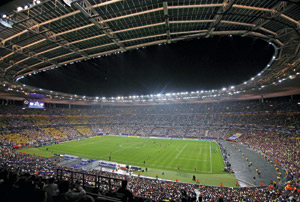 The national Stade de France, built for the 1998 World Cup on the site of a former gasworks in the Saint-Denis area, is one of the world’s great stadiums.
The 80,000- capacity arena hosts the Final of the French Cup and League Cup, and most international games, other major sporting events such as rugby internationals and rock concerts. Tickets for most events can be bought at branches of Fnac and Virgin, although for internationals you are advised to arrange tickets through individual FAs.
The Stade has its own stops on the RER B and D lines and is an easy hop from the Gare du Nord. The D is best for the West stand, the B for the East. The stadium shop and tours (€10/£7) are accessed through Gate H. The Cafe Planisphere, through Gate D, offers reasonably-priced lunches.
The Parc des Princes, in the south-west of the city near the Bois de Boulogne, was the national stadium before the Stade. It was formerly a velodrome, dating back to the early 1900s, and owes its modern look to a complete makeover as an international football and rugby stadium in 1972.
The Parc, also revamped for the 1998 World Cup, has a capacity of 49,000 and is used mainly for home matches of Paris Saint-Germain. A recent addition has been a PSG superstore and adjoining contemporary eaterie, Restaurant 70 (reservations +33 1 45 27 05 70). Opposite, you’ll find the Cafe aux Deux Stades, a popular pre-match bar. Also busy is the Trois Obus (120 Rue Michel-Ange), a cafe where match tickets are sold, right by the nearest Metro stop of Porte de Saint-Cloud on line 9.
Tickets are also available at www.psg.fr and at branches of Fnac and Virgin. The hard-core PSG fans occupy the Boulogne end while another group use the Auteuil end. 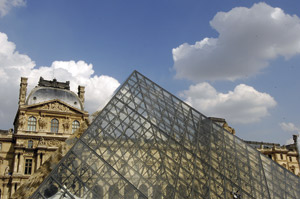 Arrival & transport
Paris’ main airport is Roissy-Charles-de-Gaulle (+33 1 48 62 22 80), some 20 miles north-east of the centre.
It’s a 40-minute journey by RER (suburban rail) train (€8/£5.70) to the Gare du Nord, Paris’ main station and terminus for Eurostar services from London. The other airport, Orly (+33 1 49 75 15 15), is 10 miles south of town. The Orlyrail train (€6/£4.25) links with Pont de Rungis on the RER C line. A single ticket on the extensive central Metro is €1.50 (£1), a carnet of 10 €11 (£7.80).
Hotels
A good mid-range option is the Hotel Brighton (218 Rue de Rivoli; +33 1 47 03 61 61; €170/£120). The Hotel Chopin (10 Boulevard Montmartre; +33 1 47 70 58 10; €90/£65) is a low-cost favourite. Same-day hotel reservations can be made in person at the tourist office, Carrousel du Louvre, 99 Rue de Rivoli (08 26 16 66 66).
Eating & drinking
Paris is traditionally regarded as the world’s gastronomic capital and the choice is vast – as can be the prices. Many neighbourhood locals will do a reasonably-priced plat du jour at lunchtime. Try a Belle Epoque brasserie such as Bofinger (pictured second bottom) (5-7 Rue de la Bastille; +33 1 42 72 87 82). A perennial and historic cheapie, providing the classic Parisian experience, is Chartier (7 Rue du Faubourg Montmartre; +33 1 47 70 86 29).
Nightlife
Paris is a night-time city with a bar on every corner. Check out the Rue Oberkampf area, where the Cafe Charbon (109 Rue Oberkampf) is the landmark venue. The Marais area contains many options, including the late-opening Lizard Lounge (18 Rue du Bourg-Tibourg). De La Ville Cafe (34 Boulevard Bonne Nouvelle) is the best of the new crop of venues in the 9th arrondissement – run by the same team as the Charbon.
Daytime entertainment
Start queueing early to scale the Eiffel Tower. Notre-Dame cathedral is free to enter – climb the towers to fully appreciate this Gothic masterpiece. The other must-see is the Louvre, which includes the Mona Lisa among its art treasures. Perhaps the best way for the first-time visitor to take in the city is to ride on the Batobus, a “hop on, hop off” boat that connects major tourist sights along the Seine. A day pass is €11 (£7.80)