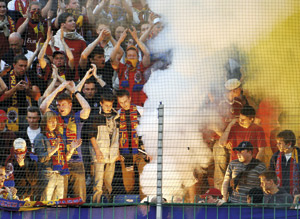 There is a good chance that this year, for the first time in four seasons, the two great rivals of Czech football will face each other in spring neck-and-neck for the championship. They were just two points apart at the winter break, and when record title-winners Sparta and long-time underdogs Slavia clash at Sparta’s Toyota Arena on April 21, each will surely still have a chance of wresting the title from the holders, provincial club Slovan Liberec.
As always, Sparta are favourites to win at the Letna, the traditional name for their home ground, which is also the national stadium, but their rivals are certainly due a victory.
Slavia have not won the title since 1996, the memorable triumph coming a century after their rivalry with Sparta had begun. The clubs met for the first time on March 29, 1896, in a 0-0 draw at the Emperor’s Meadow in front of 121 paying spectators.
Four days earlier, Slavia had first worn their red-and-white halved shirts, with the red five-pointed star badge, a symbol of Czech nationalism. Prague was part of the Habsburg empire at the time, ruled from Vienna; Slavia was the name of a Czech-language society of literature, sport and debate.
Sparta enjoyed a large working-class support. The team were renowned for fighting until the final minute, earning themselves the nickname zelezna – Iron Sparta.
So the games between these two clubs, the Derby ‘S’, started to take on extra significance. Slavia dominated the early exchanges and thrashed their rivals 9-1 in 1907 and 9-2 four years later. But Sparta fought back, recording gritty wins in 1913 and 1914.
Until the Second World War, the clubs monopolised the championship. They also both won the Mitropa Cup, a forerunner of the European Cup, and provided the bulk of the Czechoslovak team that nearly won the 1934 World Cup.
The Prague football scene was entertaining and colourful. The football fraternity discussed the game in the cigarette smoke of the Cafe Slavia, and on the pitch, players were not afraid to try unusual moves, using tricks learned in street football.
But for Slavia the good times came to an end in 1947 when they won their 13th title, with legendary Pepi Bican leading the line. The following year came the Communist takeover, when sport was another area of Czech life to be restructured. Sparta’s support earned them the favour of the authorities, but the leadership viewed the troublesome university-educated intellectuals of Slavia with suspicion. The club were stripped of their name, their star players and the 1948 autumn title, something still disputed to this day.
New force
Slavia, rebranded Sokol Praha 7 then Dynamo, suffered the ignominy of second division football after half the squad went to newly-formed army side, ATK, later renamed Dukla, the new force in the Czech game.
Dukla carried the flag for football-proud Prague into the televised era of European competition. Sparta changed acronyms – TJ CKD, AC – but always remained Sparta, and picked up the odd title.
Slavia later got back their name and top-flight status, even getting the better of the Derby ‘S’ in the 1970s. Slavia players honoured the 1989 student demonstrations against the Communist regime with a pre-match show of support.
The changes to a free-market economy after the Communist collapse led the army to withdraw their support from Dukla in 1994. The club, for ever linked to the hated former regime, were hurtling towards bankruptcy and playing in front of three-figure crowds. Then, in 1996, they were merged with second division FC Pribram by entrepreneur Bohumir Duricko. The new entity, Marila Pribram, based 60km south-west of Prague, are currently fighting a relegation battle in the top flight.
Bohemians, another Prague club, have had a similarly turbulent existence since the war. Despite their proletarian roots, they were not favoured by the Communist authorities and, like Slavia, were forced to change their name, first to Zeleznicar then Spartak Stalingrad. They became Bohemians again in the 1970s and enjoyed their best period in the Eighties. The club were then relegated and nearly went out of business in 2005, only to be saved by fans’ donations. Club president is Antonin Panenka, hero of Czechoslovakia’s penalty shoot-out win in the Euro 76 Final.
Entrepreneurs dominated the Czech game in the 1990s. Millionaire Vratislav Cekan spent a fortune rescuing Viktoria Zizkov, the club of the working-class Prague 3 district who are currently in the second division. The Rezes family, owners of the Kosice steelworks in Slovakia, threw enough money at debt-ridden Sparta to keep them atop the League and competing in the Champions League. Czech-American Boris Korbel took over Slavia but had left by the time Karel Poborsky, Radek Bejbl and Vladimir Smicer led the club to the 1996 title, their first for 50 years.
As Slavia’s pre-war goalkeeping hero Frantisek Planicka lay dying in bed, the club triumphed on an emotional May afternoon. A month later, the same three players helped take the national team to the Euro 96 Final, marking a real revival in the country’s football.
After that, Slavia sold their stars and have failed to match Sparta since – but the derby always holds its magic and the rivalry is as historic as any in the European game. In October, there were six yellow cards and one red in a feisty 0-0 draw at Slavia’s temporary home, the Evzen Rosicky stadium. Next year will see the first derby at Slavia’s revamped Eden stadium. Last season’s meeting at the Letna attracted a crowd of 20,300, the highest since 1993. The game at Sparta in April will be the 265th derby in all. 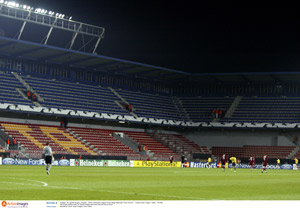 The Toyota Arena, known by all as the Letna after the parkland in which it is set, is the home of Sparta Prague and the national team. The ground, a compact, 20,000-capacity all-seater, became a political hot potato last May when prime minister Jiri Paroubek made a pre-election pledge to build a 35,000-capacity national stadium on the site. Although the idea has since lost momentum, the FA is still looking for Sparta to vacate the ground by 2008.
The stadium lies just over the Vltava river, north of the city centre, on the Milady Horakove main road. The nearest metro station is Hradcanska, on green line A.
Tickets for Sparta games (60Kc-230Kc; £1.50-£5.50) go on sale two days in advance at the club’s customer centre (+420 296 111 400), next to the stadium’s entrance 1. Office hours are 9am-noon and 1pm-5.30pm on Monday, Tuesday and Thursday, until 7pm on Wednesday and until 4pm on Friday. On weekend matchdays, the office opens three hours before kick-off.
Sparta fans gather at the south end of the ground, the Milady Horakove end, which is accessible through entrance 1. Visiting supporters sit in the north end, via entrance 4. Neutrals are most comfortably positioned along the east side, via entrances 2 and 3. Souvenirs, including traditional Czech football horns, are sold at the club shop on the corner of Milady Horakove and U Sparty. Stadium tours (20Kc-30Kc; 50p-75p; in Czech only) take place on weekdays, 10am-noon, 1pm-4pm, except on matchdays and the day before European games.
While Slavia’s Eden ground in Vrsovice is being reconstructed they are playing at the Evzen Rozicky stadium, beside the massive Strahov stadium in the north-west of the city.
Second division leaders Viktoria Zizkov are based in the working-class district of Zizkov, a short tram ride south of Prague’s main railway station, Hlavni nadrazi. Bohemians, mid-table in the second division, play at the modest Dolicek stadium in Vrsovice, a short tram ride from either the IP Pavlova or Namesti Miru metro stations. 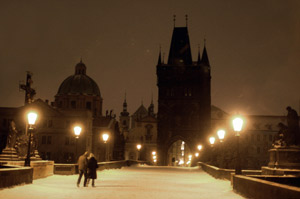 Prague airport, Ruzyne, is 20km north-west of the centre, served by a CEDAZ bus to Dejvicka and Namesti Republiky metro stations. A taxi should cost about 500 crowns (Kc) (£12); agree a price beforehand.
The city has a three-line metro network and a plethora of trams and buses. Complicated machines offer short-hop single (14Kc; 35p) and one-ride multi-transfer (20Kc; 50p) tickets as well as passes. The centre is walkable, however.
Hotels
Although designer hotels now abound, there are still plenty of cheap options. You can book accommodation with the Prague Information Service (Old Town Hall, Staromestske namesti; +420 221 714 444) online or in person.
Hotel Yasmin (Politickych veznu 12; +420 234 100 100), near Wenceslas Square, is the latest in the designer genre.
Grand Hotel Evropa (Vaclavske namesti 25; +420 224 228 215), on Wenceslas Square, is certainly grand on the outside but modest on the inside, hence the mid-range prices for something so central. The tranquil Hotel Villa Schwaiger (Schwaigerova 3; +420 233 320 271) is handy for the Toyota Arena.
Eating & drinking
Czech food is traditionally heavy and unadventurous. Pork and dumplings are served at dozens of cheap neighbourhood eateries, where the kitchen tends to have closed by 9pm. Typical of the genre are U Medvidku (Na perstyne 7) and U Radnice (U Radnice 2). For a more modern take on Czech cuisine, try Celnice (V Celnici 4) or Zahrada v opere (Legerova 75).
Czech beer is cheap and arguably the best in the world. Brews such as Budweiser, Staropramen and Pilsner Urquell can be enjoyed at a traditional beerhall, such as the famous, tourist-swamped U Fleku (Kremencova 11), or at the many modern venues – Zelezne dvere (Kremencova 10) and Ultramarin (Ostrovni 32) are as good as any and livelier than most.
Daytime entertainment
The key sight is Prague Castle, where you’ll find St Vitus Cathedral. Old Town Square is the site of the Church of Our Lady before Tyn, the Old Town Hall and the Astronomical Clock. Charles Bridge is a short walk away.
After dark
Prague is party city. Mainstay clubs Roxy (Dlouha 33) and Radost FX (Belehradska 120) face competition at the weekend from Mecca (U pruhonu) in Holesovice, Klub Lavka (Novotneho lavka 1) and Duplex (Vaclavske namesti 21).