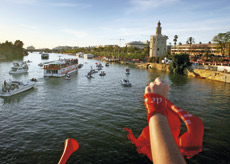 Romantic, romanticised Seville offers all the cliches of Andalucia – and thus of Spain as a whole: bullfighting, flamenco, tapas bars and fervent religious processions.
As you might expect, there is also fierce football rivalry in the Andalucian capital, and the meetings between the Betis and Sevilla clubs are classics of the Spanish calendar.
The derby has been one of the most violent in recent years. In a 2005 clash at Sevilla the two sets of fans fought outside the ground while, on the pitch, the coaching staffs came to blows. In February the following year at Betis’ ground, then Sevilla coach Juande Ramos was knocked out by a missile thrown by a home fan. As punishment, Betis were ordered to play three home games elsewhere.
The Sevilla Football Club was formed in 1905 by employees of the nearby Rio Tinto mines. The directorship comprised members of the landowning classes. When one director refused to hire a factory worker to work at the club there was a revolt and dissident members left to form Betis. The latter club then merged with another club, Sevilla Balompie (an old Spanish name for football), in 1914. Having made King Alfonso XIII their honorary president, they became Real (Royal) Betis Balompie. The first derby took place in October 1915, Sevilla winning 4-3.
Both clubs have moved around town since their early days at the Prado de San Sebastian. Nowadays, Sevilla are in the commercial district of Nervion, their Sanchez Pizjuan stadium surrounded by fast highways and a contemporary shopping mall; Betis’ Manuel Ruiz de Lopera stadium is in the working-class Heliopolis district, south of the city centre. De Lopera, Betis’ owner, turned down the chance to share the city’s Olympic stadium, built on the 1992 Expo site of La Cartuja, with Sevilla. As a consequence the Olympic sees little football action. The most notable game of recent years was the UEFA Cup Final in 2003, when Porto beat Celtic. The city witnessed a peaceful invasion by 80,000 Celtic fans.
The goals of striker Oliver Ward pushed Sevilla to their only league title in 1946. Two years later they won the Spanish Cup. But that was the end of the silverware until their recent run. Indeed, Sevilla were more renowned for offering huge salaries to players (notably Diego Maradona) who failed to shine.
The change came with the arrival of Jose Maria del Nido as president. Star forward Jose Antonio Reyes was sold to Arsenal to help balance the books, and investment was made in young players. The fruit has been a succession of trophies at home and in Europe.
The whites took their first trophy for nearly 60 years with a 4-0 win over Middlesbrough in the 2006 UEFA Cup Final, and retained the Cup last season, this time beating Espanyol in the Final. Sevilla also won the European Super Cup in 2006 and the Spanish Cup and Super Cup in 2007. They were even in with a shout of taking the league crown on the final day of last season, but lost while Real Madrid, the new champions, and Barcelona both won.
There was tragedy at the start of this season when defender Antonio Puerta collapsed during the opening league match against Getafe and died in hospital a few days later. But despite that and the departure of Ramos for Tottenham in the autumn, Sevilla have managed to stay in the upper echelons of La Liga and progressed to the knockout stages on their Champions League debut.
Betis have also won the league title only once, a shock triumph in 1935 under former Manchester United player Patrick O’Connell, while they have two Spanish Cup wins, in 1977 and 2005. But the rest of their history is steeped in mediocrity and battling in the lower leagues. De Lopera brought in big names – an unhappy Denilson springs to mind – and overhauled the club’s modest stadium, somewhat immodestly lending it his own name. But despite all that, Betis were relegated in 2000, though they subsequently bounced back.

Between 1983 and 1995, the national team played nearly every home game in Seville, either at Betis or Sevilla. The tradition began following the 12-1 thrashing of Malta in the Euro 1984 qualifiers that put Spain in the finals instead of Holland by virtue of having scored more goals. The city achieved talismanic status as the team won 20 of their next 23 qualifying matches there. But in the mid-1990s, the FA decided to use stadiums around the country to stage Spain games.
Betis’ renovated Manuel Ruiz de Lopera stadium, the former Benito Villamarin, stands in the working-class district of Heliopolis, south of the city centre. It is named after the club owner, who has plans to increase capacity from 52,000 to 65,000 by knocking down the south stand and expanding. To get there, catch the 34 or 35 bus from the Plaza Nueva in central Seville. Bars line Calle Reina Mercedes and Calle Terejo on the way to the ground; the tiny Bodeguita Castulo is the most popular. For ticket information, visit the official site.
Sevilla’s home, the Sanchez Pizjuan, is named after a former club president and holds 45,000. Its most celebrated match was the epic 1982 World Cup semi-final between West Germany and France. It is expansive enough to feel grand but intimate enough to generate a real atmosphere. Home fans, the Biri-Biri, occupy both ends; the north is the most fervent. Buses 21 and 23 run from Plaza Nueva, 32 via Santa Justa train station. The streets parallel to the main drag Eduardo Dato opposite the stadium are full of bars; the Al Relente at c/Aznalcazar 6 has great old photos on the walls. For tickets, log on to the official site.
The Olympic stadium on La Cartuja holds nearly 58,000 and occasionally stages internationals. It was built in the late 1990s as part of the city’s unsuccessful bid to host the 2004 Olympics. It is easiest to reach by taxi from the city centre. 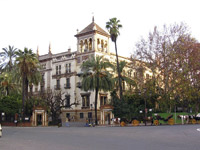 Arrival & transport
San Pablo airport is seven miles east of the city. Buses to town run every 30-60 minutes via Santa Justa train station (journey time 25 minutes). City centre buses are run by the TUSSAM company. A single ticket is €1.10 (80p), a bonobus ticket of 10 €5 or €6 (£3.70 or £4.50). A day pass is €3.25 (£2.40), a three-day €7.50 (£5.50).
Hotels
The Hotel Alfonso XIII (2 c/San Fernando; +34 954 917 000; €330-500/£250-380) is the best in town, a beautiful five-star built by the King for the 1929 Expo. Los Seises (6 c/Segovia; +34 954 229 495; €150-200/£115-150) is great value considering it’s an ornate four-star with a roof-top pool. The Murillo (9 c/Lope de Rueda; +34 954 216 095 €75-100/£57-75) is a comfortable, well-located two-star with an old-fashioned feel. For hotel information visit the main tourist office, 21 Avenida de la Constitucion (+34 954 221 404), or the national tourist office.
Tourist hotels abound in Sultanahmet, some providing substantial breakfasts on rooftop terraces. One such is the Terrace Guesthouse (Kutlugun Sok 39; +90 212 638 9733; £35).
Eating & drinking
The narrow streets of the Santa Cruz and Triana districts are lined with tapas bars with pretty, tiled interiors. Many do a cheap, fixed-price menu del dia – the cheapest around the university quarter. Egana Oriza (41 c/San Fernando; +34 954 227 211) is the most talked-about restaurant in town, a superb Basque eaterie with a well-heeled clientele. La Albahaca (12 Plaza Santa Cruz) is a mid-priced restaurant in a converted palace on a picturesque square. The Casa Morales (11 c/Garcia de Vinuesa), one of the city’s oldest bars, offers great local wines.
Daytime entertainment
The key sights are all within an easy walk. The  construction of the 15th century cathedral coincided with the Age of Discovery and contains the tomb of Christopher Columbus. La Giralda, attached to the cathedral and the icon of Seville, is the minaret of the mosque that stood on the site. Opposite is the Alcazar, a 14th century palace in which Ferdinand and Isabella planned the conquest of the Americas. The Museo de Bellas Artes (9 Plaza del Museo) has a superb Spanish art collection.
After dark
For flamenco, La Carboneria (18 c/Levies) is classic but informal (open until 3am daily). The Cafe del Mar (83 c/Jesus del Gran Poder) offers trendy DJ sounds.