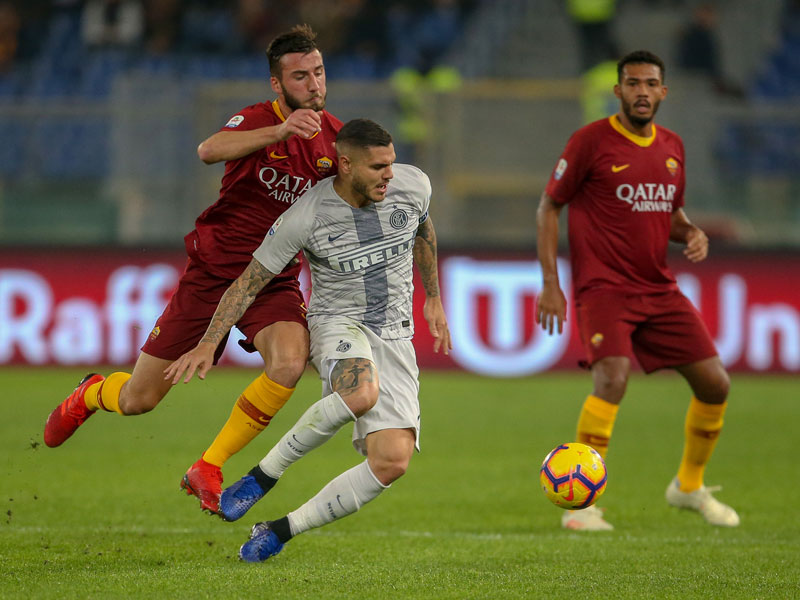 Paddy Agnew’s Notes From Italy: Spalletti And A Tough Stretch For Inter

Arguably the most entertaining Serie A game of this last weekend came at the Olimpico in Rome on Sunday night where Roma drew 2-2 with Inter in one of those rare Serie A games where it seemed that neither side had ever heard of the concept of “settling for the draw”.
In fairness, a draw was of little interest to these pair, notwithstanding the nine points of difference between third placed Inter and eighth placed Roma. These are, of course, two of Italy’s Champions League quartet, so a win against a potential rival for a Champions League berth next season mattered.
More than that, though, both sides clearly felt the need to recover ground following two midweek Champions League performances where they probably felt they had let themselves down. Against an unusually cautious Real Madrid, Roma should have been 1-0 up right on the half-time whistle when their talented Turkish striker Cengiz Under missed a total sitter from three yards and in front of an empty goal.
That was bad enough but worse was to follow in practically the first action of the second half when first goalkeeper Swede Robin Olsen completely miskicked a simple clearance only for his Argentine team mate Federico Fazio to outdo that mistake by heading the said clearance straight to a totally unmarked Gareth Bale on the six yard line for the opening score of the night. As acts of harakiri go, the Roma one-two either side of halftime was impressive.
Luckily for them, their eventual 2-0 home defeat did not matter since, even before kick-off, Roma knew that they were qualified, given the unexpected 2-1 away win of Czech side Viktoria Plzen against CSKA Moscow. From here on, however, mistakes like those last Tuesday night will prove a lot more painful.
In contrast to Roma, Inter had an even more disappointing night 24 hours later against Tottenham at Wembley, losing their tie 1-0 to an 80th minute goal from Danish wizard Christian Eriksen. The Spurs winner hit Inter just as they were beginning to think they had pulled off a much prized 0-0 result. Ironically, this had been one of Inter’s better performances in Group B, prompting coach Luciano Spalletti to claim this week that his side had played better in London than in their last gasp 2-1 win at the San Siro in September.
With both sides in need of a morale boost, both of them gave it a Jack Charlton “lash” in a game that looked more Premiership than Serie A, in terms of tempo, rhythm and defensive work which the late Gianni Agnelli would have termed “emozionante” (as in exciting in a hair-raising sort of way). Inter twice took the lead through Senegalese attacking midfielder Keita Baldé and then their Argentine captain Mauro Icardi.
However, Roma twice equalised first through Under and then Serb Aleksandr Kolarov from the penalty spot. Not only was a draw the fairest result but both Roma equalisers were especially apt. Under’s spectacular 51st minute goal was badly needed in the wake of his outrageous miss against Real Madrid, whilst Kolarov’s 75th minute missile of a penalty was not only a text book example of the art but it was also just reward for arguably Roma’s most influential player on the night.
Whilst Roma can sit back, wait for the second round draw and hope that they do not draw Barcelona, Man City or Bayern Munich in the second round, Inter go into a tantalising last night, knowing that even a home win against PSV Eindhoven may not be good enough to see them through. The thought that Spurs might perform heroics and manage to beat Barcelona in the Camp Nou, thus qualifying on the strength of their away goal in that 2-1 San Siro defeat, has Inter fans worried.
[collection name=”small” accordion=”mobile” excerpt=8]
Analysts have attempted to assuage those fears by pointing out that, in the last 10 years, Barcelona have been beaten only three times in Champions League ties at the Nou Camp. Winning at the Nou Camp is indeed a tall order. Yet, until this one is in the bag, Inter fans will not rest easy.
In the meantime, coach Spalletti has a more immediate concern. Next Friday night, Inter are away to all powerful league leaders and champions Juventus in a game that comes under the “Mission Impossible” category. Juventus come into this game already 11 points clear of third placed Inter at the end of an autumn campaign which has seen them win 13 and draw one of their 14 Serie A games so far.
As he contemplates just how he will stop the Juventus juggernaut, one suspects Spalletti will pay scarse attention to one piece of freely offered, public advice this week. Mario Jo Martinez, father of the current Inter reserve striker Lautaro Martinez, used his Twitter handle to attack the coach, predicting “a dire end” for Spalletti.
In all probability, the words of Martinez senior, himself a former player with Argentine club Rosario Puerto Belgrano, were an expression of his frustration at seeing his son assigned to the role of understudy to the peerless Icardi. Asked about the paternal outburst, Spalletti was less than impressed, saying:
“I only know Lautaro from the Martinez family. What is important, however, is that he should understand that in attacking me, his father is also attacking the club and is even causing problems for Lautaro himself because it ruins his image and damages his relations with his team mates…This lad (Martinez junior) does not need to be defended by anyone. He is a man not a child…Anyway, it has all been settled…”
Settled or not, I somehow suspect that Lautaro Martinez will start Friday night’s big game on the bench.
Don’t forget to follow World Soccer on Facebook and Twitter.